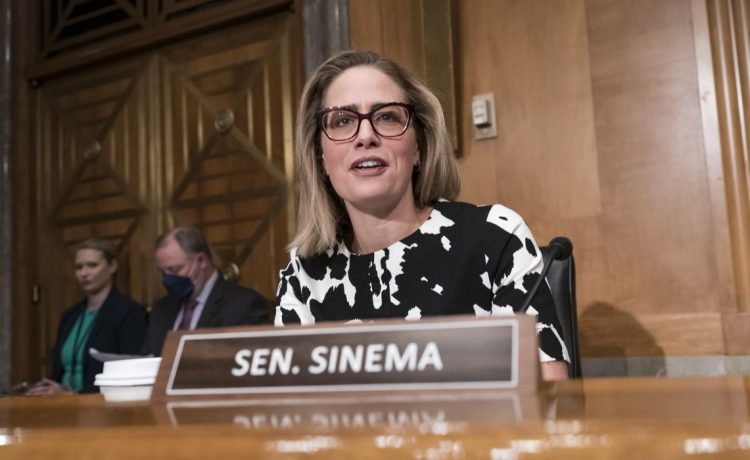 Sen. Kyrsten Sinema, Arizona Democrat, broke her silence Thursday night on her party’s efforts to pass a major climate, tax, and spending bill, saying in a statement that she plans to “move forward.”

Her support means that Democrats have the votes they need to approve the legislation along party lines and deliver a significant victory to President Biden.

Ms. Sinema noted that her support for the $740 billion piece of legislation was contingent on changing its tax provisions targeting the wealthy and large corporations, about which she has long had reservations.

She also said her approval was conditional on the Senate Parliamentarian’s review of the bill, who has broad discretion to determine what can and cannot be included under budget rules that allow Democrats to pass the measure with a simple majority and circumvent the filibuster.

“We have agreed to remove the carried interest tax provision, protect advanced manufacturing and boost our clean energy economy in the Senate’s budget reconciliation legislation,” Ms. Sinema said in a statement. “Subject to the Parliamentarian’s review, I’ll move forward.”

The decision by the centrist Democrat, who has faced intense lobbying from both sides of the aisle and interest groups in recent days, is certain to frustrate Republicans. She was their last hope of sinking the Democrats’ bill in an evenly split 50-50 Senate.

Democrats’ other centrist member, Sen. Joe Manchin III of West Virginia, crafted the legislation with Senate Majority Leader Charles E. Schumer, infuriating Republicans because he previously indicated he could not support passing such a measure along party lines in the face of 40-year-high inflation.

“I have had many productive discussions with members of our conference over the past three days and we have addressed a number of important issues they have raised,” he said. “The agreement preserves the major components of the Inflation Reduction Act, including reducing prescription drug costs, fighting climate change, closing tax loopholes exploited by big corporations and the wealthy, and reducing the deficit by $300 billion.”