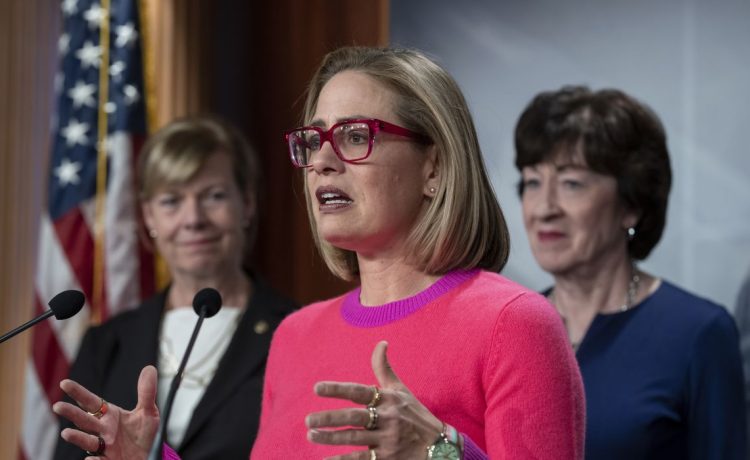 Liberal activists got exactly what they wished for following Sen. Kyrsten Sinema’s recent announcement she is ditching the Democratic Party to fly her independent flag.

The 46-year-old dropped the bombshell roughly a year after activists chased her into a bathroom stall and bird dogged her at a wedding she officiated — prompting the mother of the bride to plead with the small, but vocal group of protestors not to spoil the ceremony.

Ms. Sinema made it clear she is sick of that sort of tribalism.

Ms. Sinema, who has not indicated whether she is running for re-election, said she is following through on her promise to be an “independent voice for our state.”

For President Biden and Senate Democrats, it is an unexpected curveball.

They are facing a tough Senate map in 2024. Now the party will have to decide whether to stick with Ms. Sinema or rally behind the winner of the Democratic primary race.

Ms. Sinema appeared to be on a primary crash course with Rep. Ruben Gallego. The liberal Democrat has teased the idea of challenging her. Mr. Gallego has billed the incumbent as a sell-out and accused her of wanting Democrats to lose the House and Senate in the 2022 midterm elections.

Mr. Gallego, who recently flew aboard Air Force One with Mr. Biden, said Ms. Sinema is “abandoning” the party.

“Arizona deserves a voice that won’t back down in the face of struggle,” he said. “Unfortunately, Senator Sinema is once again putting her own interests ahead of getting things done for Arizonans.”

Barrett Marson, an Arizona GOP strategist, said the Sinema news is both “earthshaking” and “at the same time wholly unsurprising.”

“She was going to have an impossible primary with Ruben Gallego who would run against her from the left,” Mr. Marson said. “Sinema has been persona non grata inside the Democratic Party for the better part of a year and this just reflects reality — both that she is not a Democrat anymore and Democrats don’t like her.”

“Democratic activists far and wide hated Sinema,” Mr. Marson said. “I think they would rather lose the seat to a Republican than have Sinema.”

For Republicans, the announcement shifts the focus on Arizona Gov. Doug Ducey’s plans for 2024.

The popular Republican could not seek re-election because of term limits and would be a tough out for Democrats in a general election with or without Ms. Sinema in the race.

Mr. Kelly cruised to nearly a 5-point victory against Blake Masters, the Trump-backed Republican who embraced the rigged election claims.

Ms. Sinema positioned herself as a leading centrist after assuming office in 2019. The role enraged liberals, particularly her reluctance to help blow up the chamber’s filibuster rules to enable Democrats to force through their agenda. Her support of keeping the filibuster intact led to censures and calls for a primary.

The frustration boiled over last year when activists from the organization Living United for Change in Arizona chased her into a bathroom at Arizona State University, where she is a lecturer, and demanded she fall in line behind Mr. Biden’s push for a massive $3.5 billion spending bill.

She didn’t, which forced Democrats to dramatically scale back their vision.

Later that month, left-wing protestors swarmed outside a wedding she was officiating.

They chanted “shame on Sinema” and “vote he rout” while touting signs that read “REPRESENTATION NOT PROSTITUTION,” “Sinema Betrays Democrats,” and “Kry$sten $inema i$ a Corporate $chill.”

“I don’t think they’re appropriate tactics but it happens to everybody,” Mr. Biden said at the time, noting it was “part of the process.”

While Ms. Sinema’s approach infuriated Democrats, it hardened her image in Arizona as an independent actor cut from the same cloth as the late Sens. Barry Goldwater and John McCain.

“She’s the first Arizona Senator in history to not fly the Democratic nor Republican Party banner,” said Mike Noble, an Arizona-based pollster. “It’s a historic and bold move by Sinema.”

“Sinema’s political move makes sense thou because her polling among Democrats hasn’t been great since some of her controversial votes and is vulnerable to a Democratic primary challenge,” Mr. Noble said. “As an Independent, she forgoes that political risk in a party primary and just needs to worry about the general election.”

Democrats will retain enough votes to control the Senate and its committees, but Ms. Sinema’s decision alters power dynamics within the party and dropped with a major thud on Friday, prompting a White House response.

“We understand that her decision to register as an independent in Arizona does not change the new Democratic majority control of the Senate, and we have every reason to expect that we will continue to work successfully with her,” White House press secretary Karine Jean-Pierre said, pointing to Ms. Sinema’s support for major pieces of Mr. Biden’s agenda.