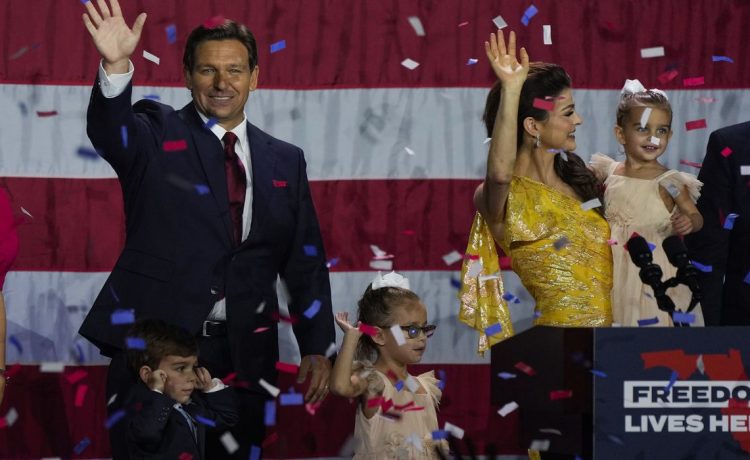 JACKSONVILLE, Fla. — Florida Gov. Ron DeSantis’s landslide reelection win in Florida on Tuesday reverberated into the 2024 presidential election and solidified his place atop a field of potential Trump alternatives who could take on President Biden.

Mr. DeSantis’s dominant victory is sure to irk former President Donald Trump, whose expected Nov. 15 announcement of a third presidential bid has been clouded by mixed election results for the slate of candidates he endorsed in critical races.

Mr. Trump leads Mr. DeSantis and all GOP contenders in hypothetical primary matchups, often by double digits. But Mr. DeSantis is the top Republican for voters who favor an alternative to Mr. Trump, and many are hoping the former president will not get in the race, polls show. In some surveys, half of GOP voters say they want someone other than Mr. Trump to run for president in 2024.

If Mr. DeSantis jumps into the presidential race, he’d likely be backed by dozens of ultra-wealthy donors, who during this cycle pushed his reelection campaign funding to near record levels for a governor’s race.

“There is no doubt that Ron DeSantis was the big winner on Tuesday,” said Ed Rollins, a Republican campaign consultant who launched a political group that is pushing Mr. DeSantis to run for president.

Mr. DeSantis was seeking an outsized reelection victory, and he got it, defeating Democrat Charlie Crist by nearly 20 points. By comparison, Mr. DeSantis won his first term in 2018 by less than half a percentage point. His predecessor, Republican Rick Scott, won his second term by a single point in 2014.

“DeSantis used his massive win to reach a national audience, telling them that he can be a Trump with substance, and one without the trunkfuls of baggage Trump brings,” Republican strategist Doug Heye said.

Mr. DeSantis, 44, hasn’t announced plans to run for president, but he has not publicly committed to remaining in the governor’s mansion for the next four years.

Delivering his victory speech in Tampa, a raucous crowd cheered for “two more years” as Mr. DeSantis took a victory lap for rejecting “woke” ideologies and for implementing the anti-lockdown, and anti-mandate policies he put in place during the COVID-19 pandemic, defying the Biden administration and many other states that shuttered schools and businesses for months.

Mr. DeSantis called Florida “a refuge of sanity when the world went mad” and “a citadel of freedom for people across the country and indeed across the world.”

He also offered a tantalizing hint about his future, telling the crowd, “I have only begun to fight.”

Brad Coker, managing director of Mason-Dixon Polling and Strategy, said Mr. DeSantis’s win has propelled him onto the national stage in front of GOP voters looking for a new Republican star to replace Mr. Trump.

“They are watching this like they watch a TV show,” Mr. Coker said, describing the GOP electorate. “The Trump show has been slowly in decline, and now you are getting into that season where everybody starts looking around and going, ‘What’s next?’ And there’s this new show, called the Ron DeSantis show.”

“He’s kind of an improved version of Trump,” he said. “He has all the same political positions. He’s a pugilist like Trump, but he does not have the baggage and he knows how to control his impulses.”

Ford O’Connell, a Republican strategist based in Florida with ties to both the DeSantis and Trump camps, said Mr. DeSantis is seen in conservative circles as America’s governor.

“On election night, I think that was solidified in a lot of folks’ minds,” Mr. O’Connell said. “But the idea that he is yet on the same playing field across the country, in Republican primary voters’ minds?  I don’t think he’s there yet. That doesn’t mean he couldn’t be, but I think it’s pretty clear that whoever the Republican presidential nominee in 2024 is, it’s going to be a Floridian and it’s going to be Donald Trump or Ron DeSantis.”