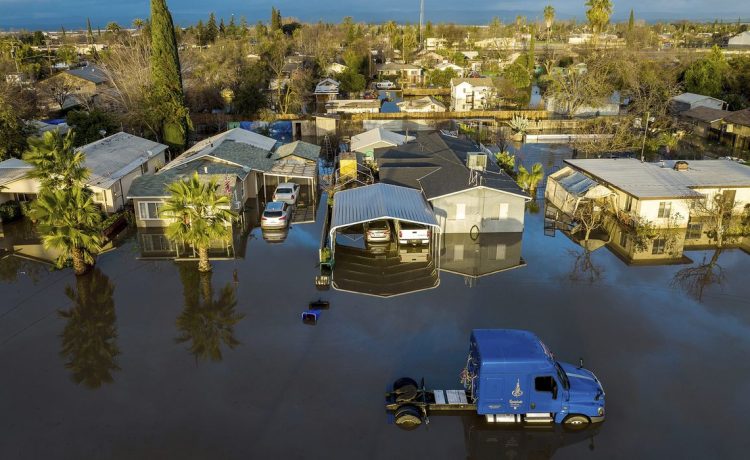 LOS ANGELES (AP) — Sinkholes swallowed cars and floodwaters swamped towns and swept away a small boy as California was wracked by more wild winter while the next in a powerful string of storms loomed on the horizon Tuesday.

Millions of residents faced flood warnings, nearly 50,000 people were under evacuation orders, and more than 110,000 homes and businesses were without power because of heavy rains, lightning, hail and landslides.

At least 17 people have died from storms that began late last month, Gov. Gavin Newsom said during a visit to the scenic town of Capitola on the Santa Cruz coast that was hard hit by high surf and flooding creek waters last week. The deaths included a pickup truck driver and motorcyclist killed Tuesday morning when a eucalyptus tree fell on them on Highway 99 in the San Joaquin Valley near Visalia, the California Highway Patrol said.

“We’ve had less people die in the last two years of major wildfires in California than have died since New Year’s Day related to this weather,” Newsom said. “These conditions are serious and they’re deadly.”

The storm that began Monday dumped more than a foot and a half (45 centimeters) of rain in Southern California mountains and buried Sierra Nevada ski resorts in more than 5 feet (1.5 meters) of snow.

Rockfalls and landslides shut down roads, and gushing runoff turned sections of freeways into waterways. Swollen rivers swamped homes and residents of small communities inundated with water and mud were stranded.

“We’re all stuck out here,” said Brian Briggs, after the deluge unleashed mudslides in remote Matilija Canyon that buried one house completely and cut off the only road to nearby Ojai.

Briggs described a scary night where the canyon creek began to flood people’s yards and the surrounding hills — stripped of vegetation in the 2017 Thomas Fire — began to tumble down in the dark.

Mudflows dragged sheds, gazebos and outhouses into the creek, he said. After helping neighbors get to higher ground, he returned home to find his fence destroyed by waist-deep mud.

A helicopter dropped 10 sheriff’s deputies Tuesday to help the residents of dozens of homes in the canyon and Briggs said he was hoping to be airlifted out.

Raging waters crested the banks of Bear Creek and flooded parts of the city of Merced and neighboring Planada, a small agricultural community along a highway leading to Yosemite National Park.

Neighborhoods were under water with cars submerged up to their roofs. Residents ordered to evacuate carried whatever they could salvage on their backs as they left in the rain.

A break in the weather Tuesday on the central coast allowed searchers near San Miguel to look for Kyle Doan, the child who vanished after he and his mother were stranded in a truck in rising waters. His mother was rescued, but Kyle was swept away, and a seven-hour search Monday turned up only one of his Nikes.

The wet and blustery weather left California’s large homeless population in a precarious situation. At least two homeless people in Sacramento County died, and more than a dozen people were rescued from a homeless encampment on the Ventura River.

Theo Harris, who has been living on the streets of San Francisco since getting out of jail in 2016, fortified his shelter with tarps and zip ties and took in his girlfriend after her tent flooded.

The storms have created what Newsom called a “weather whiplash,” swinging from an epic drought to the other extreme and arriving with a fury and frequency likely to create problems well into next week.

While most of the state remains in extreme or severe drought, according to the U.S. Drought Monitor, the state said the water content in the snowpack is more than double the average.

“It’s fair to say that what we’re seeing right now in California will certainly help to relieve some of the localized aspects of drought, but will not resolve the long-term drought challenges,” said Rick Spinrad, administrator of the National Oceanic and Atmospheric Administration.

The latest atmospheric river — a long plume of moisture stretching out into the Pacific that can drop staggering amounts of rain and snow — began easing in some areas. But more rain was forecast to arrive Wednesday in Northern California, and then a longer storm system was predicted to last from Friday until Jan. 17.

The weather service issued a flood watch through Tuesday for the entire San Francisco Bay Area, along with the Sacramento Valley and Monterey Bay. Areas hit by wildfires in recent years faced the possibility of mud and debris sliding down bare hillsides.

Gusts as high as 88 miles per hour (141 kilometers per hour) were recorded in the mountains north of Los Angeles, and rainfall was expected to reach up to half an inch (1.27 centimeters) per hour. Tornadoes that had been forecast never materialized.

In South San Francisco, high winds ripped part of the roof off a large apartment building.

The squalls and flooding have forced school cancellations in some communities and intermittently shut down sections of major roadways that have flooded or been blocked by trees, rocks and landslides.

A sinkhole swallowed two cars on a Los Angeles street, trapping two motorists who had to be rescued by a team of firefighters. Photos Tuesday showed a chasm nearly the width of a street and with huge chunks of pavement and the little car deep inside it.

Another sinkhole damaged 15 homes in the rural Santa Barbara County community of Orcutt.

In the wealthy seaside community of Montecito, 80 miles (128 kilometers) northwest of Los Angeles, evacuation orders were lifted Tuesday for about 10,000 people, including Prince Harry, Oprah Winfrey and other celebrities. The community had been told to evacuate on the fifth anniversary of a mudslide that killed 23 people and destroyed more than 100 homes.