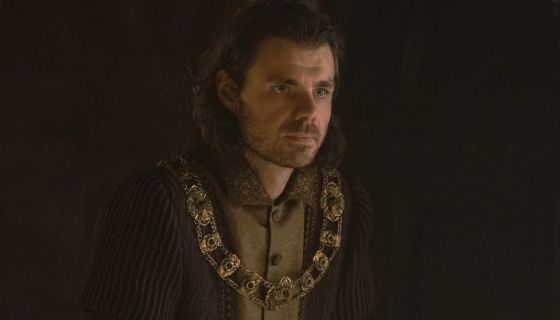 Larys told Alicent the rent was DUE 👣💦 #HouseOfTheDragon pic.twitter.com/0cHH3agf81

‘House of the Dragon‘ fans are buzzing over Ser Larys Strong’s freaknasty foot fetish that stirred up hilarious shenanigans across social media and beyond.

In the shocking scene, Strong can be seen pleasuring himself to the sight of Queen Alicent Hightower’s feet as part of a skeevy arrangement where he provides valuable intel that she uses to plot covert missions.

Queen Alicent Hightower, first of her name, originator of the selling of feet pics#hotd pic.twitter.com/ZgLFgizGSF

Nicknamed ‘Clubfoot,’ Strong burned his own family alive and schemed his way into Queen Alicent’s inner circle where he trades the secrets he procures for fappy foot time–a seemingly fair deal (depending on who you ask).

“Looking at her feet and then having a wank, basically,” said Episode 9 director Clare Kilner during an interview with EW’s ‘West of Westeros’ podcast.

Kilner, who directed episodes 4 and 5, confirmed that Executive Producer Sara Hess and a writer on episode 9, came up with Larys’ freaky foot fetish.

“Her mind is incredible. I mean, she really wrote us a wonderful episode, I have to say,” Kilner remarks. “But, yeah, that was an interesting scene actually… Funnily enough, you get the intimacy coordinators [for] all the nudity, but they don’t think about it for this.”

“It’s so intrusive and invasive,” she adds. “It’s a really dirty scene.”

You may recall Strong showing strong signs of creepiness with a quick flash of the eyes during this scene back in episode 6.

And then there’s this clip where Strong’s creep levels were off the charts.

Based on what we know about the Game of Thrones-verse, this is only the beginning of shocking moments to come.

What was your reactions to Larys’ freaky foot fetish? Tell us down below and peep the hilarious Twitter hysteria over the moment on the flip.