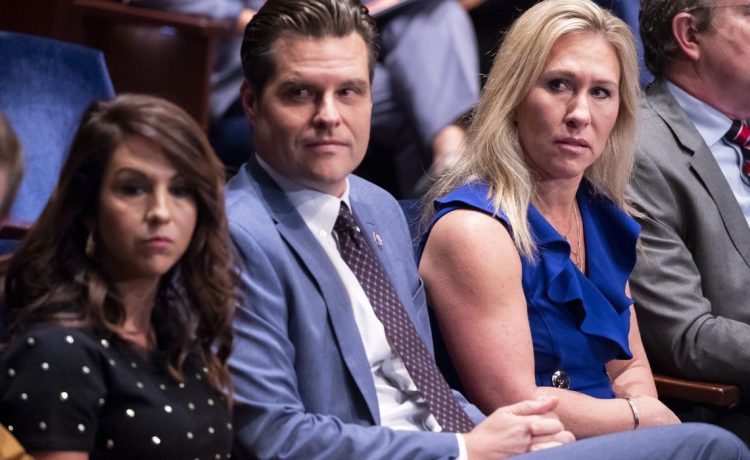 Two of the House Republicans’ most vocal conservative firebrands duked it out online over the speakership battle that will decide whether House Minority Leader Kevin McCarthy has enough support in his conference to win the gavel in January.

Rep. Marjorie Taylor Greene of Georgia is at odds with her fellow Freedom Caucus members who take issue with Mr. McCarthy becoming speaker. One of those speaking out against the Californian is Colorado Rep. Lauren Boebert, who took a shot at Ms. Greene at a Turning Point USA event Monday.

Ms. Boebert, standing next to Rep. Matt Gaetz, Florida Republican, said she would not support Mr. McCarthy without reinstating a provision that would let lawmakers remove him as speaker more easily if they no longer back him.

Mrs. Greene shot back on Twitter that Ms. Boebert “gladly takes our $$$ but when she’s been asked: Lauren refuses to endorse President Trump, she refuses to support Kevin McCarthy, and she childishly threw me under the bus for a cheap sound bite.”

Mrs. Greene, in her series of tweets, said she and Mr. McCarthy supported Ms. Boebert and donated to her reelection campaign that she barely won this cycle against Democrat Adam Frisch.

“Kevin McCarthy has supported and donated to Lauren Boebert. She just barely came through by 500 votes,” she tweeted, later adding that “Americans expect conservative fighters like us to work together to Save America … and that is the only mission I’m 100% devoted to, not high school drama and media sound bites.”

Mr. Gaetz, who previously got into a similar public spat with Mrs. Greene over their differences with supporting Mr. McCarthy’s speakership, told Mr. Kirk, “I’m a fan of [Mrs. Greene]. I’m an admirer. But it’s not something we see the same on.”