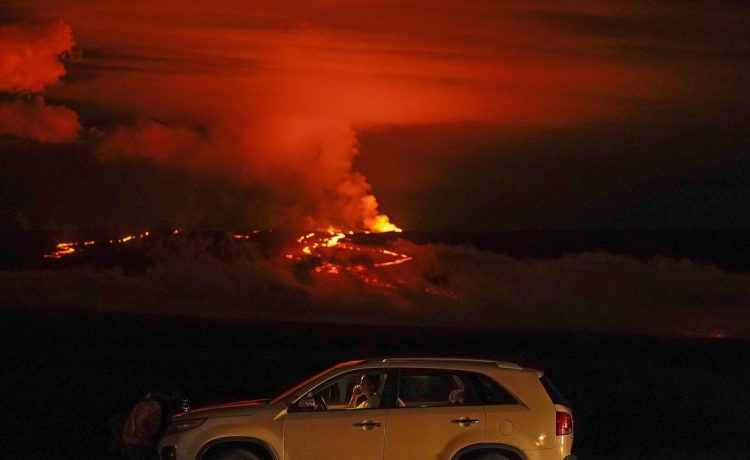 The lava flow from the ongoing eruption of Mauna Loa on the island of Hawaii has stalled out 1.7 miles from the Saddle Road highway that bisects the island from east to west.

The U.S. Geological Survey said Friday that “the inactive main flow front remains stalled.” A day earlier, it was moving at a pace of around seven feet per hour.

The Saddle Road stretches from the city of Hilo in eastern Hawaii to the city of Kailua-Kona in western Hawaii. Neither the road nor other infrastructure was under threat as of Thursday.

“Just to emphasize, there is no current threat to any island communities or infrastructure at this time,” David Phillips, deputy scientist-in-charge at the USGS Hawaiian Volcano Observatory (HVO), told the Associated Press Thursday.

As of Friday morning, current lava flows in the northeastern rift zone of the volcano were only reaching 1.2 miles from the F3 vent producing them. The USGS noted that other lava channels appeared drained and no longer capable of feeding the main flow front.

“We don’t expect that the new lava coming out on the surface to be able to replenish the supply to the flows that are closest to Daniel K. Inouye Highway,” HVO geologist Frank Trusdell told the Associated Press.

The areas around the lava flow continued to be closed for public safety reasons, although a viewing route remains open for cars on older sections of the Saddle Road. Some visitors, however, have littered in the lava, drawing the ire of officials.

“We’ve been seeing people being really disrespectful, putting trash out there, throwing marshmallows into the lava. Not only is that bad for the environment and people are trespassing, but it’s disrespectful to Hawaiians and their love for Madame Pele and the culture of Hawaii,” Hawaii County Mayor Mitch Roth said, according to news site SFGATE.

Pele is the native Hawaiian goddess of lava and fire, and eruptions are considered a sacred sign of change and natural cycles for many indigenous Hawaiians.