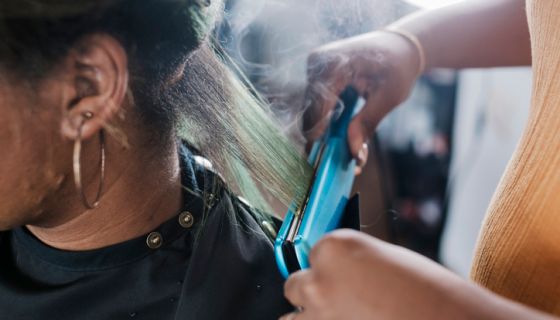 You might have heard that a Black woman is suing L’Oréal USA and four other hair relaxer manufacturers whose products she alleges caused uterine cancer, and here are all the details.

According to Good Morning America, 32-year-old Jenny Mitchell said she was in the third grade when she first started using chemical hair-straightening products in 2000. She said her condition left her no choice but to undergo a full hysterectomy to remove her uterus, which meant she would never have children.

“Not being able to carry my own children has been the hardest thing that I’ve ever had to deal with,” she told GMA. “This is a dream of mine that I’ve always wanted.”

Mitchell, who is represented by civil attorney Ben Crump, filed her lawsuit in Illinois about a week after a new study published in the Journal of the National Cancer Institute found people who use a lot of hair-straitening products are disproportionately vulnerable to developing uterine cancer.

To be clear, scientists involved in the study, which was funded by the National Institutes of Health, say it’s not yet clear whether these products directly cause cancer and that, as of now, their research only points toward a possible link.

Still, Mitchell said she was “shocked” when she learned of the study.

“But at the same time, I also thought that maybe this could be an answer to my diagnosis,” she said.

Mitchell also talked about the pressure put on Black women to placate a eurocentric standard of beauty by straitening their hair.

“As an African American woman, it is the societal norm to have your hair look a certain way,” she said. “‘Don’t wear your natural hair because it looks unprofessional.’ A lot of women deal with that in all types of settings. I’m hoping to be the voice for millions of other African American women out there because we start so young, getting these chemical relaxers in our hair.”

There’s really no lie to be found in that statement. There’s a reason the CROWN Act is 100% necessary.

Crump and other attorneys representing Mitchell allege that L’Oréal and the other manufacturers were aware their products are toxic and put people, especially young Black girls” at significant risk for cancer.

“At the end of the day, what we’re hoping to do is use this platform not just for this litigation, but more importantly if you’re out there and have little Black girls, stop today using these chemical relaxers,” Crump said during a press conference.