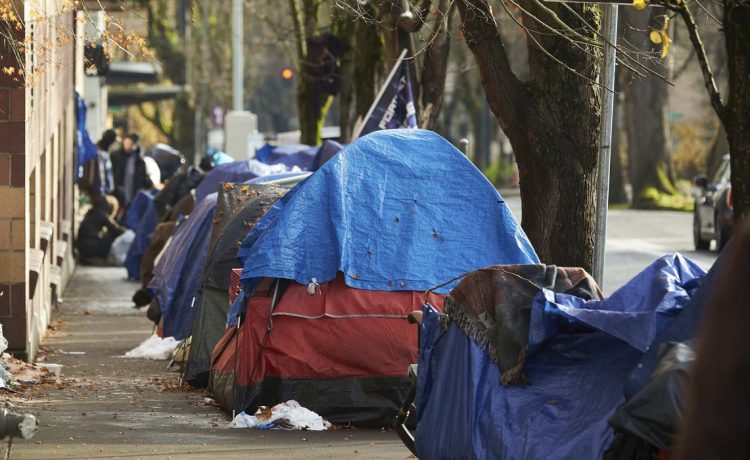 Ten plaintiffs have filed a class action complaint against the city of Portland, Oregon, for allowing homeless people’s tents to block sidewalks.

The suit says the city is violating the Americans with Disabilities Act (ADA) by failing to keep the sidewalks clear, citing in the complaint a provision calling sidewalks a “service, program, or activity of the City within the meaning of Title II.”

The suit charges that Portland’s major business thoroughfares, including the area in front of the city’s Amtrak station, are clogged with homeless tents that impair the mobility of the plaintiffs.

These neighborhoods include “Old Town, Chinatown, Downtown, the Pearl District, Central Eastside, [and] Laurelhurst Park,” among others, according to the Portland Tribune.

“The city has failed and continues to fail to maintain its sidewalks clear … They are blocked by tent encampments and attendant debris, rendering the sidewalks inaccessible, dangerous and unsanitary for people with mobility disabilities,” the suit reads.

Portland’s options are somewhat restricted by the 2017 9th U.S. Circuit Court of Appeals ruling in Martin v. City of Boise, which prohibits cities from banning homeless camps if there are not enough shelter beds in place ready to take them in.

To accommodate this, the complaint also calls for “an order requiring the city to construct, purchase, or otherwise provide for emergency shelters in which to house the unsheltered persons affected by the court’s judgment.”

At a press conference, according to Portland NBC affiliate KGW-TV, plaintiff Steve Jackson, a blind man, said that “often there’s tents blocking the entire sidewalk where I don’t see them, because they weren’t there the day before. And then I hit the tent and people are mad at me and they might think I’m attacking them, but really I don’t see them.”

Fellow plaintiff Barbara Jacobsen, who uses an electric wheelchair, told the Associated Press that she often has to ride in the street to avoid people on the sidewalks.

“The city has abandoned us and the homeless,” Ms. Jacobsen said.