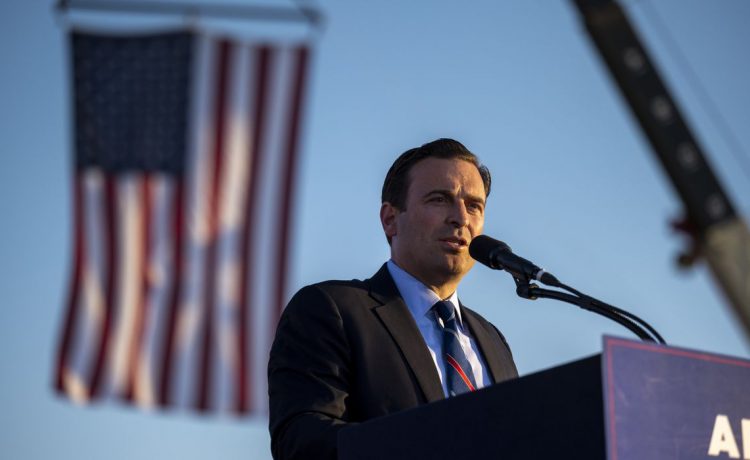 LAS VEGAS — Adam Laxalt, the GOP nominee for the U.S. Senate, is making a play for Hispanic voters in his bid to unseat Democratic incumbent Sen. Catherine Cortez Masto.

On the surface, Ms. Cortez Masto, the first Latina elected to the Senate, appears to have the upper hand with these voters. Mr. Laxalt and his GOP allies maintain this slice of the electorate is more up for grabs this year thanks to a combination of President Biden’s unpopularity and Democrat-inspired pandemic lockdowns that decimated the service industry.

“Hispanic voters … they became seriously disillusioned with Democrat policies, and I always start with COVID,” Mr. Laxalt told The Washington Times ahead of a recent “Latinos for Laxalt” event.

Mr. Laxalt said the COVID shutdowns decimated Hispanic-owned small businesses and made life difficult for working-class families with school children who were shut out of the classroom.

“That was really, really tough for the Hispanic community,” he said.

Republicans are working to improve their fortunes with Hispanics after the success former President Trump had with Latino voters in 2016 and 2020. Democrats, however, are confident they are still best positioned to connect with Latino voters given their intense focus on elevating candidates of color.

The margin between the parties, though, is shrinking.

In Nevada, Hispanic voters can swing the election. They accounted for almost 20% of the electorate in recent elections. Mr. Biden carried 61% of those voters to win Nevada in 2020, which matched Hillary Clinton’s performance from four years earlier.

Another survey from OH Predictive Insights showed Ms. Cortez Masto has a 50% to 45% edge over Mr. Laxalt with Latino voters and that 39% of those same voters have a “very unfavorable” view of the incumbent.

Jobs and the economy were far and away the top issues.

The Cortez Masto campaign did not respond to a request for comment.

Edgar Flores, a member of the Arizona Assembly and former chair of the Nevada Hispanic Legislative Caucus, said the Hispanic voters are by no means monolithic, but said he still sees this voting bloc as Democrat-leaning.

Mr. Flores said Democrats have had a far greater presence than Republicans in the state’s Latino communities, though he said their candidate’s message sometimes “misses the mark.”

He said Democratic candidates could be doing more to highlight the positive impact the federal coronavirus relief funds had on their lives.

They could focus more on the economic challenges facing the community and perhaps less so on the issue of abortion, which may resonate more in other communities, he said.

“I think we don’t focus enough on that,” Mr. Flores said of the economy.  “I think the conversations are very different among Latinos because a lot of them — whether they entered the country lawfully or unlawfully or whatever it may be — the conversations are usually, ‘I had to sacrifice everything. I had to leave my parents behind, I missed weddings. I missed this in order for you to be here. So you better work hard. You better make sure all that sacrifice was worth it.’”

The National Republican Senatorial Committee, the campaign arm for Senate Republicans, has been running ads casting Ms. Cortez Masto as soft on violent crime and a consistent supporter of the Biden administration’s failed policies.

The Democratic Senatorial Campaign Committee, the campaign arm for Senate Democrats, also has been involved, spending millions on ads casting Mr. Laxalt as an ally of big oil companies profiting from the pain voters face at the pump.

The group also has been focused on reaching out to communities of color, including Latino voters. The Culinary Workers Union also is speaking with Spanish-speaking voters on the doorsteps, urging them to rally behind Ms. Cortez Masto and other Democrats on the ticket.

At a campaign event here at a strip mall, Jaime Flores, the Hispanic communications director for the Republican National Committee, told Laxalt’s supporters that polls show Democrats are losing their edge among Hispanic voters “by giant leaps.”

“The polls also reveal that most Hispanics believe that Republicans will do a better job in the economy, border security, and crime,” he said. “Obviously the two most important issues that Hispanics take into consideration are economic well-being and the fight against crime.”

“If Democrats believe that Hispanics are going to stop worrying bout inflation because of the abortion issue, the election results will show them the colossal size of their mistake,” he said.

Mr. Laxalt, meanwhile, opened up his remarks by focusing on the southern border, saying it is a national security imperative to stop the flow of illegal immigrants and drugs coming into the country.

He said the “unnecessary COVID shutdowns” crushed Hispanic-owned businesses, stripping families of the opportunity to fulfill the American dream.

“I hope we never shut down our economy again for something like COVID,” he said. “The other thing that is killing Hispanic businesses and the Hispanic community all across the valley are Democratic policies that are increasing inflation, making everything cost more, making everything unaffordable.”

“It is making people change their lifestyles to adapt to Biden-Masto policies,” he said. “She never stood against these policies. … We need a Senator who is going to be independent, and who will stand for this community and this state.”