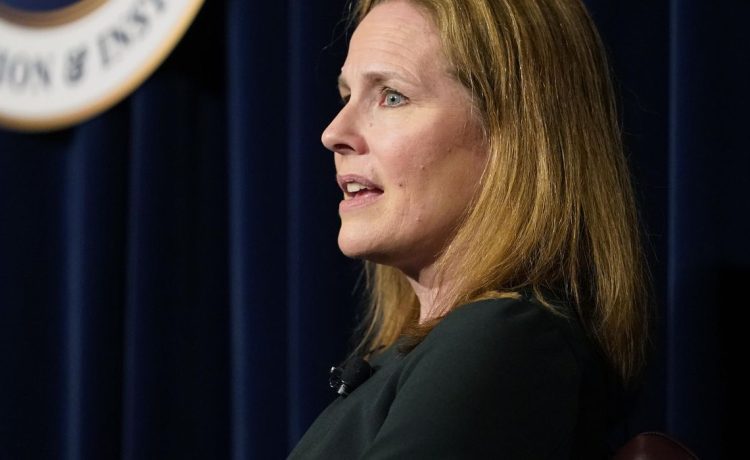 As culture becomes increasingly secular, there’s a growing hostility toward religion that seeks to threaten the very fabric of civility and constitutionality.

Amid the growing toxicity of cancel culture, there’s also a seemingly more benign — but equally troubling — pattern developing in which secularists and liberals have begun to openly proclaim that Christians are ill-equipped for government posts and appointments.

In other instances, they’ll argue that religious views preclude Christian public servants from weighing in on various court cases or issues of import.

The latest example surrounds Supreme Court Justice Amy Coney Barrett, whose association with People of Praise, a Christian group, led some disaffected former members of the organization to claim she should recuse herself from 303 Creative LLC v. Elenis.

The case, argued before the Supreme Court on Monday, surrounds Lorie Smith, a graphic designer in Colorado, who is seeking to avoid making same-sex wedding websites for clients. Ms. Smith has taken her grievances to the high court to settle the matter and establish clearer religious freedom parameters.

This case is incredibly consequential in an era of never-ending battles surrounding Christian bakers, photographers and others who serve the wedding industry. And that’s precisely why it should be no surprise that some want Justice Barrett — a person many assume will back the graphic designer on religious freedom grounds — out of the running to weigh in on the matter.

One former member of the People of Praise told The Guardian the organization has “anti-gay values” that harm “real people.” The resulting argument essentially states: Justice Barrett has a traditional, biblical view on marriage and, thus, shouldn’t be permitted to weigh in on cases centered on the issue.

But here’s the problem: Every human being has a perspective on virtually every issue. If we took this argument to its extreme, no Supreme Court justice could weigh in on any matter.

That’s why Kellie Fiedorek, an attorney with Alliance Defending Freedom who is representing Ms. Smith, told me calls for Justice Barrett’s recusal are “despicable.”

“It’s despicable, and it’s unfortunate that we’re at a time in our society where we’re doing this to justices,” Ms. Fiedorek said. “Each of the justices have their own personal faith. And to do that is religious discrimination.”

Ms. Fiedorek is correct that the recusal argument constitutes an erosion of personal rights for justices and is a push for a religious litmus test that is impermissible under the law.

None of these blatant realities, though, has stopped some liberals and secularists from forming a troubling pattern on this issue.

Consider that Justice Barrett was at the center of a similar debacle in 2017 when she was up for an appeals court position and Sen. Dianne Feinstein, California Democrat, delivered a remark that immediately sparked bipartisan reaction and rebuke.

“The dogma lives loudly within you,” Mrs. Feinstein said, with her questions seeming to ponder how the judge’s Catholic faith would impact her position. And Justice Barrett is hardly the lone victim of such bizarre antics.

Others, such as Russell Vought, former President Donald Trump’s choice for deputy director of the Office of Management and Budget, also faced similar questioning in 2017. Sen. Bernard Sanders, one of the most liberal politicians around, hammered Mr. Vought over comments he wrote about Islamic and Christian theology after a dispute at Wheaton College, a Christian university.

“Muslims do not simply have a deficient theology,” Mr. Vought wrote. “They do not know God because they have rejected Jesus Christ his Son, and they stand condemned.”

This led Mr. Sanders to ponder whether the post was Islamophobic, to which Mr. Vought said it was not and explained he was detailing his biblical faith. Mr. Sanders kept pushing, though, wondering if Jews, too, “stand condemned.”

“Senator, I wrote a post based on being a Christian and attending a Christian school that has a statement of faith that speaks clearly with regard to the centrality of Jesus Christ in salvation,” Mr. Vought said.

For Mr. Sanders, though, this was an unacceptable response and he openly said Mr. Vought’s statements made him ineligible for the government post.

“I would simply say … that this nominee is really not someone who is what this country is supposed to be about,” he said. “I will vote no.”

The idea that central Christian teachings make someone ineligible, unqualified or unable to fulfill political appointments is not only preposterous, it’s also dangerous. Under such a worldview, sways in the cultural winds could make any individual or group a sudden target.

And yet this reality is lost on those who continue to make these proclamations and ask such blatantly unconstitutional questions. Justice Barrett, Mr. Vought and many others like them are simply guilty of following a moral code that liberals and secularists dislike.

A failure to defend their rights, regardless of where one stands, is a failure to stand by the values that have consistently made America the greatest nation in the world.

Billy Hallowell is a digital TV host and interviewer for Faithwire and CBN News and the co-host of CBN’s “Quick Start Podcast.” He is the author of four books, including “Playing with Fire: A Modern Investigation into Demons, Exorcism, and Ghosts,” and “The Armageddon Code: One Journalist’s Quest for End-Times Answers.” He was formerly the director of content and communications at Pure Flix and the former faith and culture editor at TheBlaze.