Lil Wayne Announces ‘Tha Carter VI’ Is On The Way 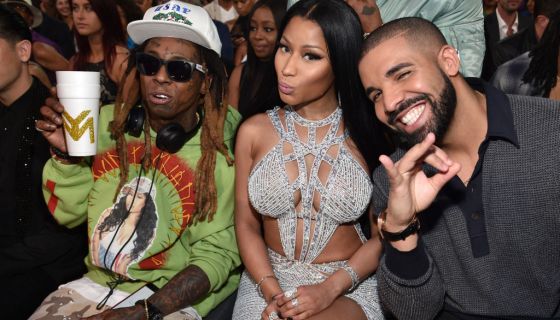 Drake made it happen and followed through with his promise to Toronto!

Saturday night (August 6), the Young Money Reunion concert had the sold-out crowd on the edge of their seats. Megastars such as Lil Wayne and Nicki Minaj took the stage to take fans on a nostalgic ride down memory lane.

This was the first time in almost a decade that the YMCMB trio shared a stage together. There was no better time than last night for Lil Wayne to announce that Tha Carter VI album is on the way. “I’m working on Carter VI, coming soon!” he told the crowd.

In the background “Tha Carter VI” appeared on the Jumbotron as the night came to a close.

Tha Carter VI is the follow-up to 2018’s oft-delayed Tha Carter V, which was allegedly the final installment in Lil Wayne’s flagship series and has been in the works since at 2020.

The trio performed some of their greatest collaborations including “Every Girl,” “The Motto,” “Moment 4 Life,” “Up All Night” and “HYFR.”

Everyone on stage made sure to give credit where credit was due and give each other their flowers. Drake took a moment to reflect on the beginning stages of his career and highlight the impact of Lil Wayne in his life.

“I’ll never forget, I was sitting outside of the old Four Seasons Hotel,” he remembered. “I always wanted to impress you, I always wanted you to be proud of me, I always wanted to live up to all the things that we’ve learned from you. The most selfless man on planet Earth. I came on your tour bus … and you gave me $30,000 that I was able to bring home to my mother, and that changed the next, like, six months for us. That’s the most important amount of money I’ve ever made in my life. You’re the most important man to each and every one of us.”

Drake then proceeded to highlight Nicki Minaj and all of her accomplishments. He told the crowd, “Are these b***s serious? Nobody can f*** with Nicki. It gets on my nerves. It’s like, the originator. It starts here, ends here — all that s***t.”

Other members of the YMCMB group hit the stage such as Mack Maine, Gudda Gudda, and Jae Millz as well as dancehall star Skillibeng, who joined Nicki Minaj to perform their “Crocodile Teeth” collaboration.

The highly anticipated reunion was scheduled to take place on Aug. 1, the third and final day of October World Weekend, however, just hours before the concert’s kickoff, Drake announced he had tested positive for COVID-19 and, therefore, had to reschedule the gig.

“I am truly devastated to say that I tested positive for Covid and the Young Money Reunion show scheduled for tonight is being rescheduled to the SOONEST date possible,” he wrote on Instagram this week. “I will keep the city posted and share the new date whenever we have it locked. Until then I hope everyone stays safe and healthy.”

The first night consisted of Drake bringing out over a dozen Canuck Hip Hop and R&B pioneers including Kardinal Offishall, Saukrates, and k-os, as well as surprise guest Nelly Furtado.

Night 2 kicked off with Chris Brown and Lil Baby for their “One of Them Ones” Tour, where Detroit rapper Icewear Vezzo was unveiled as Quality Control Music’s newest signing.

Drake then announced that he’s “currently working on bringing OVO FEST around the world in 2023 for the 10th Anniversary.”

Check out more clips from the concert below.