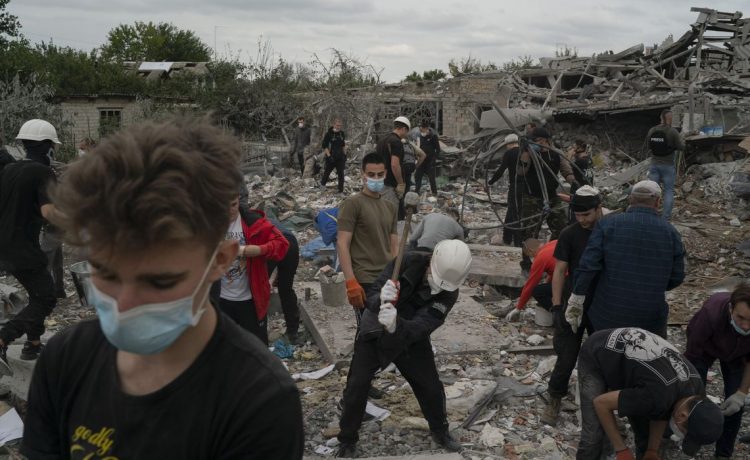 Russia has declared its intention to increase its targeting of Ukraine’s power, water and other vital infrastructure in its latest phase of the nearly 8-month-old war.

He gave no other details.

Russian forces also struck a school in Zaporizhzhia region early on Thursday, the deputy head of the president’s office Kyrylo Tymoshenko on Telegram.

BRUSSELS – European Union leaders head into a two-day summit with opposing views if and how the bloc could impose a gas price cap to contain the energy crisis caused by Russia’s invasion of Ukraine and its strategy to choke off gas supplies to the bloc.

The need for rock-solid EU unity in confronting Russia will be underscored by Ukrainian President Volodymyr Zelenskyy. He is set to address the 27 national leaders by video conference from Kyiv asking for continued help to get his nation through the winter.

BERLIN – Chancellor Olaf Scholz is underlining Germany’s concerns about the idea of a cap on natural gas prices, which many other European Union nations are prepared to embrace.

Scholz told Germany’s Parliament before an EU summit starting later Thursday that “a politically set price cap always carries the risk that producers then sell their gas elsewhere – and we Europeans ultimately don’t get more gas, but less.”

He said the EU must consult closely with other gas consumers, such as Japan and South Korea, so that they don’t compete with each other; and that it’s important to talk with gas producers about “an appropriate price.”

Scholz added: “I am convinced that countries such as the U.S., Canada or Norway, which stand by Ukraine in solidarity together with us, have an interest in energy in Europe not becoming unaffordable.”

The German leader said that the best answer to short energy supplies is to expand renewable energy quickly. But he said that in order to replace Russian gas, “we must also work with countries where there is a possibility to develop new gas fields,” within countries’ commitments under the Paris climate accord.

BERLIN – Chancellor Olaf Scholz says Germany will train a brigade of up to 5,000 Ukrainian troops as part of a European Union training mission approved earlier this week.

The EU on Monday approved the mission, which will run for two years initially. Its immediate aim is to train about 15,000 troops, chiefly in Poland and Germany, and it’s hoped that the mission will be up and running by mid-November.

Scholz told lawmakers in Berlin on Thursday that one of the headquarters will be in Germany and “by spring, we will train a complete brigade with up to 5,000 soldiers.”

He said that “with this, we are underlining are readiness to participate in the long-term building of strong Ukrainian armed forces, hand in hand with our partners.”

“They only strengthen the determination and staying power of Ukraine and its partners,” said Scholz. “Russia’s bomb and missile terror is ultimately an act of desperation, just like the mobilization of Russian men for the war.”