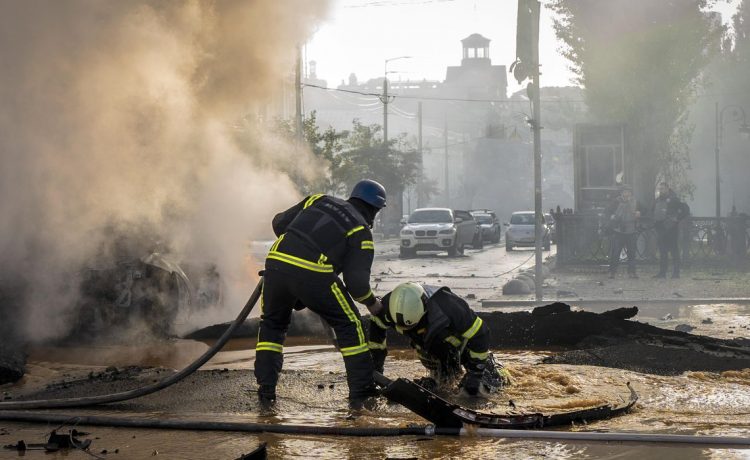 KYIV, Ukraine – Ukraine’s State Emergencies Service says that 19 people were killed and 105 others were wounded in Monday’s Russian missile strikes across Ukraine.

It said Tuesday that critical infrastructure facilities were hit in Kyiv and 12 other regions, and 301 cities and towns were without power.

Russia on Monday retaliated for an attack on a critical bridge by unleashing its most widespread strikes against Ukraine in months. They hit at least 14 regions, from Lviv in the west to Kharkiv in the east. Many of the attacks occurred far from the war’s front lines.

Follow all AP stories on the war in Ukraine at https://apnews.com/hub/russia-ukraine

TALLINN, Estonia – Moscow’s barrage of missile strikes on cities across Ukraine has elicited celebratory comments from Russian officials and pro-Kremlin pundits, who in recent weeks have actively criticized the Russian military for a series of embarrassing setbacks on the battlefield.

Commentators lauded Monday’s large-scale attack as an appropriate and long-awaited response to Kyiv’s successful counteroffensives and a weekend attack on a key bridge between Russia and the annexed Crimean Peninsula.

Many argued, however, that Moscow should keep up the intensity of the strikes in order to win the war. Some analysts suggested that President Vladimir Putin is becoming a hostage of his own allies’ views on how the military campaign in Ukraine should unfold.

HONG KONG – Hong Kong leader John Lee says he will only implement United Nations sanctions, after the U.S. warned the territory’s status as a financial center could be affected if it acts as a safe haven for sanctioned individuals.

Mordashov, who is believed to have close ties to Russian President Vladimir Putin, was sanctioned by the U.S., U.K. and the European Union in February after Russia’s invasion of Ukraine. Hong Kong authorities have said that they do not implement unilateral sanctions imposed by other governments.

“We cannot do anything that has no legal basis,” Lee told reporters. “We will comply with United Nations sanctions, that is our system, that is our rule of law,” he said.

A U.S. State Department spokesperson said in a statement Monday that “the possible use of Hong Kong as a safe haven by individuals evading sanctions from multiple jurisdictions further calls into question the transparency of the business environment.”