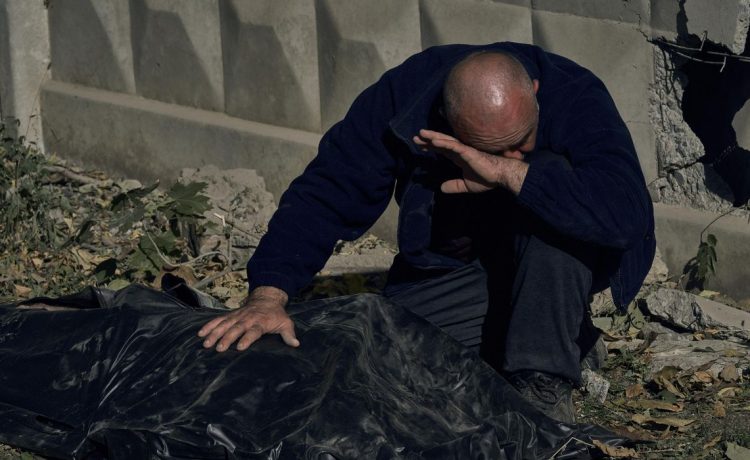 KYIV, Ukraine – Russia is keeping up its targeted attacks on critical infrastructure across Ukraine, in a fifth straight day of intensified bombardments.

Multiple Russian missile strikes shook the capital of the Zaphorizhzhia region overnight as the city continued to be a focal point for Russian fire.

Russian forces have struck the regional capital and the surrounding area continuously in recent days and weeks, creating concerns about the safety of the nearby nuclear power plant.

The regional capital is about 100 miles (160 kilometers) from the plant, which is the largest nuclear power facility in Europe.

The heavier Russian barrage began last Monday and comes as Ukraine pushes its military counteroffensive on the southern front.

– How Moscow grabs Ukrainian kids and makes them Russians

– Follow all AP stories on the war in Ukraine at https://apnews.com/hub/russia-ukraine

Russia is promising free accommodation to residents of the partially occupied Kherson region who want to evacuate to Russia.

The move suggests that Ukrainian military gains along the southern front are worrying the Kremlin.

Russian Deputy Prime Minister Marat Khusnullin made the announcement shortly after the Russia-backed leader of Kherson, Vladimir Saldo, asked the Kremlin to organize an evacuation from four cities of the region.

Kherson is one of four Ukrainian regions illegally annexed by Moscow last month.

KYIV, Ukraine – Ukrainian armed forces are reporting steady territorial gains along the southern front in the country’s battle against invading Russian forces, including the recapture of 75 settlements in the Kherson region in the last month.

The Ministry for Reintegration of Temporarily Occupied Territories announced late Thursday that Ukraine’s armed forces have recaptured 502 settlements in the Kharkiv region, 43 in the Donetsk region and seven in the Luhansk region.

Russian officials say Ukrainian shelling on Thursday evening blew up an ammunition depot in Russia’s Belgorod region on the border with Ukraine.

Russia’s Investigative Committee said Friday that an unspecified number of people were killed and wounded in the incident.

KYIV, Ukraine – The director general of the IAEA, Rafael Mariano Grossi, told journalists in Kyiv that the situation around the Zaporizhzhia Nuclear Power Plant remains “concerning.”

“It hasn’t improved in any way,’ he said on Thursday evening in Kyiv shortly after returning from Russia.

The International Atomic Energy Agency keeps pushing for a demilitarization zone around the nuclear plant, which means “no attack against the plant and the plant not to be used as a tool to attack,” Grossi explained. The plant is in an area occupied by Russia but those working at the plant are Ukrainian.

At the same time, he said the IAEA believes Russians want to create the security, because “they are working with him.”

However, Grossi said he still didn’t receive any indications from Russian President Vladimir Putin that he is ready to discuss with IAEA the definitive “parameters” that will allow finding a safe solution for the biggest nuclear power plant in Europe amid the war.

Ukrainian Foreign Minister Dmytro Kuleba said on Twitter that he met with Grossi in a bomb shelter in Kyiv “while Russian terrorists kept firing missiles at Ukraine.” His post included a photo of the two men meeting in what appeared to be an underground room with pipes hanging from the ceiling.

“I reiterated that Russia must withdraw from the ZNPP to ensure its nuclear safety and security, immediately stop abductions and intimidation of the Ukrainian personnel,” he tweeted.