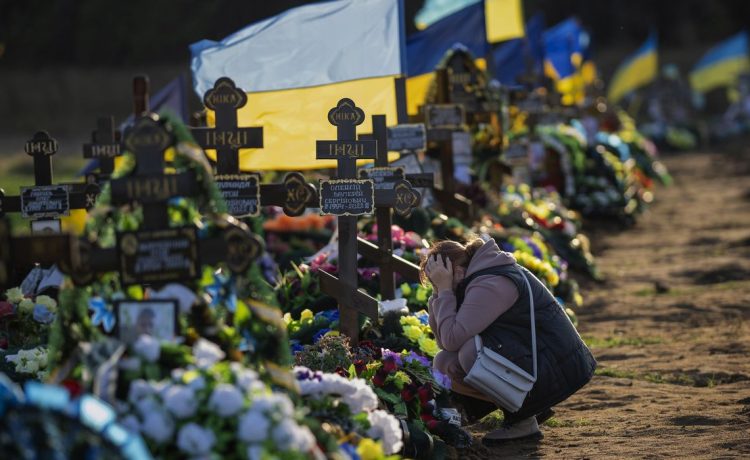 MOSCOW – The Moscow-appointed authorities in the southern region of Kherson say that tens of thousands of people have been evacuated in the face of Ukraine’s offensive.

Kherson Gov. Vladimir Saldo said Thursday that over 70,000 residents of Kherson and nearby areas have moved to the left bank of the Dnieper river. The regional authorities have urged residents to evacuate as Ukraine has pushed its offensive to reclaim Kherson, which was captured by Russian forces during the first days of the conflict.

Regional authorities have also removed monuments to Russia’s 18th century military chiefs Alexander Suvorov and Fyodor Ushakov from the city. Saldo said that the remains of Grigory Potemkin, the Russian general who founded Kherson in the 18th century and was his governor, were also removed from the St. Catherine Church in Kherson and moved to safety.

Vice Gov. Kirill Stremousov said Thursday that the regional administration also has been evacuated from Kherson. Despite that, Stremousov said that Ukrainian attempts to advance on Kherson have been thwarted and insisted that Russian troops will keep their hold on the city.

– UN steps up satellite tracking of damage to Ukraine culture

– Takeaways from investigation of Russian general in Ukraine

MOSCOW – The head of the Crimean city of Sevastopol said a power plant just outside the city has come under a drone attack.

Crimea, which was annexed by Russia in 2014, has faced drone attacks and explosions from supporters of Ukraine.

In a major setback for Russia on Oct. 8, a powerful truck bomb blew up a section of a strategic 19-kilometer bridge linking Crimea to Russia’s mainland.

KYIV, Ukraine – Ukraine’s presidential office said that that at least four civilians have been killed and another eight have been wounded in the latest Russian attacks across the country.

“The Russians are using drones and missiles to destroy Ukraine’s energy system ahead of the winter and terrorize civilians,” Kuleba said in televised remarks.

An energy facility was also struck by Russian rockets in the Zaporizhzhia region, according to local authorities.

MOSCOW – A Russian diplomat has strongly protested the use of Western commercial satellites in support of Ukraine and warned that they could be targeted.

Konstantin Vorontsov, a deputy head of the Russian delegation at a United Nations arms control panel, said in remarks delivered Wednesday that the use of U.S. and other Western commercial satellites for military purposes during the fighting in Ukraine is “extremely dangerous” and effectively means their involvement in the conflict.

Vorontsov warned that “the quasi-civilian infrastructure could be a legitimate target for a retaliatory strike,” adding that the Western action raises risks for stability of space assets serving civilian needs.

Follow AP’s coverage of the war in Ukraine: https://apnews.com/hub/russia-ukraine