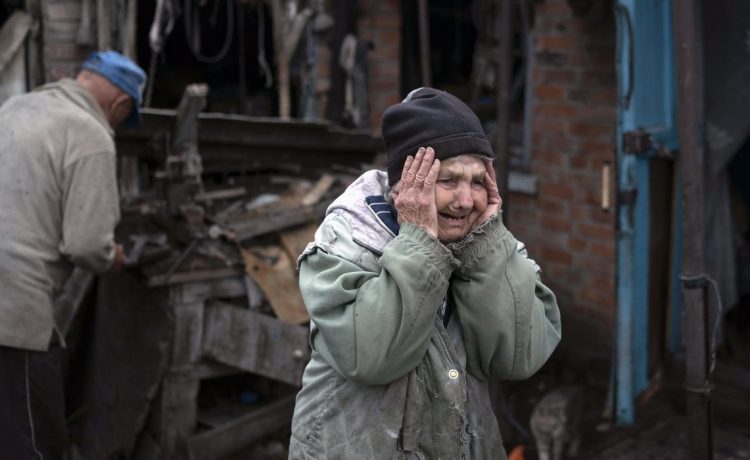 Kremlin-installed governments in the four areas have all declared landslide victories.

In a message posted on Twitter, the high representative of the EU for foreign affairs, Josep Borrell, said: “This is another violation of Ukraine’s sovereignty + territorial integrity, amidst systematic abuses of human rights. We commend the courage of Ukrainians, who continue to oppose & resist Russian invasion.”

– Ukraine’s president: No talks with Putin if its land annexed

KYIV, Ukraine – Russian-installed officials in occupied regions of Ukraine said Wednesday they would ask President Vladimir Putin to incorporate the territories into Russia.

Separatist officials in the Donetsk region, large swaths of which still remain under Ukrainian control, are expected to follow suit.

Pro-Moscow administrations of all four occupied regions of Ukraine said Tuesday night that their residents had voted to join Russia. Western officials have dismissed the referendums as illegal, but Putin is likely to use them to declare annexation of the four regions.

BRUSSELS – The European Union’s top diplomat says the bloc suspects that damage to two underwater natural gas pipelines was sabotage and is warning of retaliation for any attack on Europe’s energy networks.

Josep Borell said Wednesday that “all available information indicates those leaks are the result of a deliberate act,” He added that any deliberate disruption of European energy infrastructure “is utterly unacceptable and will be met with a robust and united response.”

Seismologists reported Tuesday that explosions rattled the Baltic Sea before unusual leaks were discovered on two underwater natural gas pipelines running from Russia to Germany. Three leaks were reported on the Nord Stream 1 and 2 pipelines. They are not currently delivering fuel to Europe.

The Institute for the Study of War cited one online video by a man who identified himself as a member of the 1st Tank Regiment, visibly upset, saying that he and his colleagues wouldn’t receive training before shipping out to the Russian-occupied region of Kherson in Ukraine.

“Mobilized men with a day or two of training are unlikely to meaningfully reinforce Russian positions affected by Ukrainian counteroffensives in the south and east,” the institute said.

In a daily briefing, the Ukrainian military’s general staff also said the 1st Tank Regiment of the 2nd Motorized Rifle Division of the 1st Tank Army has received new troops coming without any training.

The Ukrainian military also claimed prisoners were arriving in Ukraine to reinforce the Russian lines. It offered no evidence to support the claim.

KYIV, Ukraine – Authorities in the southern Ukrainian city of Nikopol say Russian rockets and artillery have pounded the city overnight.

The city, across the Dnipro River from Russian-occupied territory, saw 10 high-rises and private buildings hit, as well as a school, power lines and other areas, said Valentyn Reznichenko, the head of the local military administration.

He said there were no immediate casualties reported from the attacks.

In the eastern Ukrainian region of Donetsk, which is partially occupied by Moscow, Russian fire killed five people and wounded 10 others over the past 24 hours, said Pavlo Kyrylenko, the head of the local military authority.

He said four people died in Kurakhovo and one person in Bakhmut from the attacks.

KYIV, Ukraine – The British military say Ukrainian advances near the eastern hub of Lyman have been slower than previously.

“Units are making slow advances on at least two axes east from the line of the Oskil and Siverskyy Donets rivers, where forces had consolidated following their previous advance earlier in the month,” the British Defense Ministry said in an intelligence briefing Wednesday.

“Russia is mounting a more substantive defense than previously, likely because the Ukrainian advance now threatens parts of Luhansk … as voting in the referendum on accession to the Russian Federation closes.”

The British added that fighting remains intense around Kherson in Ukraine’s south as the Russian military “remains vulnerable” on the eastern banks of the Dnipro River.

“Russia continues its grinding attempts to advance near Bakhmut in the Donbas even while it faces severe pressure on its northern and southern flanks,” the British said. “This is likely due to political pressure as Russia is using forces that could otherwise reinforce the other flanks.”