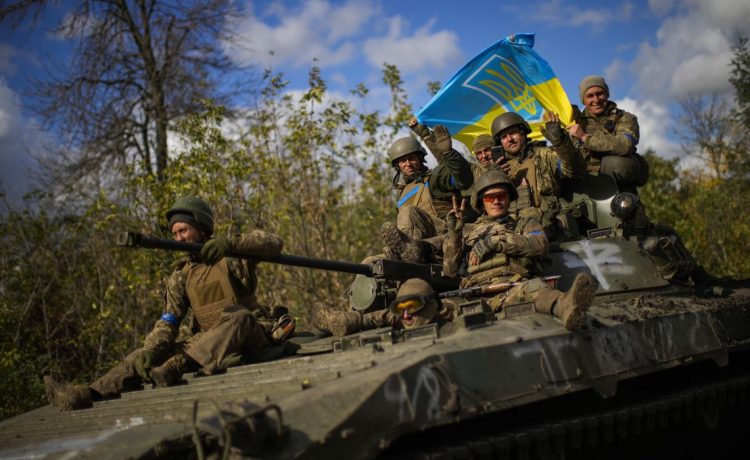 KYIV, Ukraine – Ukraine’s presidential office says that at least five civilians have been killed and eight have been wounded by the latest Russian shelling.

The strikes were the first on the town since March when the Russians retreated from the areas near the Ukrainian capital after a failed attempt to capture it.

Russian forces also shelled the areas on the western bank of the Dnieper facing the Russia-held Zaporizhzhia nuclear power plant, and in the Donetsk region.

In Sviatohirsk, which was reclaimed by Ukrainian forces, a burial ground for civilians was found and bodies of four civilians were discovered, according to Donetsk Gov. Pavlo Kyrylenko.

Luhansk Gov. Serhiy Haidai said the Ukrainian forces were pressing their offensive from Lyman toward Kreminna snd Svatove. In the Kherson region, the Ukrainian troops captured eight towns and villages so far this week during their counteroffensive, according to the presidential office.

KYIV, Ukraine – Kyiv has dismissed as “worthless” the laws that Russian President Vladimir Putin signed on Wednesday formalizing the annexation of four Ukrainian regions into Russia.

“The worthless decisions of the terrorist country are not worth the paper they are signed on,” the head of the Ukraine President’s Office, Andriy Yermak, said on Telegram messaging application. “A collective insane asylum can continue to live in a fictional world.”

President Volodymyr Zelenskyy earlier said in his nightly address that he has signed a decree rendering void any of Putin’s acts designed to annex Ukrainian territories since the annexation of Crimea in 2014.

“Any Russian decisions, any treaties with which they try to seize our land – all this is worthless,” Zelenskyy said at the end of his video address.

MOSCOW – Russian energy company Gazprom says it is resuming gas supplies to Italy after reaching an agreement for transit through Austria.

The Russian government-controlled company had suspended delivery to Italy through Austria last week citing regulatory changes that came into effect in the Alpine nation last month.

In a statement Wednesday, Gazprom said the operator of an Austrian pipeline has indicated its willingness to handle the transit of gas to Italy “making it possible to resume the supplies of Russian gas across Austria.”

Russian President Vladimir Putin has signed laws formally absorbing four Ukrainian regions into Russia, even as its military is struggling to hang on to control of the regions it illegally annexed.

The documents finalizing the annexation carried out in defiance of international laws were published on a Russian government website on Wednesday morning.

Earlier this week, both houses of the Russian parliament ratified treaties making the Donetsk, Luhansk, Kherson and Zaporizhzhia regions part of Russia. That followed Kremlin-orchestrated “referendums” in the four regions that Ukraine and the West have rejected as a sham.

On the ground, Moscow’s war in Ukraine has entered a new, more dangerous phase. Russia faces mounting setbacks, with Ukrainian forces retaking more and more land in the east and in the south – the very regions Moscow has pushed to annex.

KYIV, Ukraine – The Ukrainian army has recaptured a number of villages in Kherson region as a part of its massive counteroffensive in the south of the country, the regional military command said.

The villages are all concentrated on the right bank of the Dnipro river in the northern part of the region.