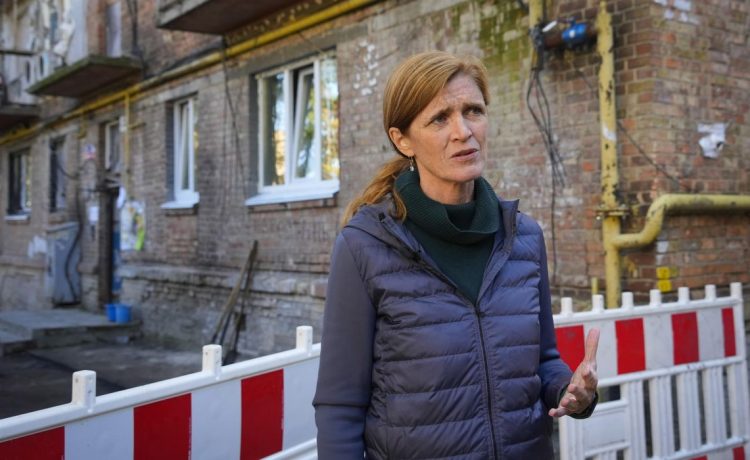 KYIV, Ukraine (AP) – KYIV – Ukraine’s emergency service says the death toll from a Russian missile attack on an apartment building in the Ukrainian city of Zaporizhzhia has risen to 11.

The service said Friday 21 people were rescued from the rubble of residential buildings that were hit with modified S-300 missiles.

Regional Governor Oleksandr Staruch posted on his Telegram channel that this was not random, but a deliberate strike on multi-story buildings.

Follow all AP stories on the war in Ukraine at https://apnews.com/hub/russia-ukraine.

KYIV – The Ukrainian military says its forces have shot down more than 20 Russian drones over the last 24 hours.

Most of the drones were the Iranian-made Shahed-136 that are packed with explosives and are designed to crash into targets.

The military also said that 500 former criminals have been mobilized to reinforce Russian ranks in the eastern Donetsk region, where Ukrainian forces have been retaking territory. The new units are commanded by officers drawn from law enforcement.

The Washington-based Institute for the Study of War says Russia has increasingly deployed the cheaper an less sophisticated Iranian-made drones in recent weeks, but the weapons are unlikely to significantly affect the course of the war.

Nikopol is situation along the Dnieper River, opposite Russian-held territory. Russian forces are trying to blunt recent Ukrainian advances along the southern front.

PRAGUE – European Union leaders are meeting in Prague to try to bridge significant differences over a natural gas price cap as winter approaches and Russia’s war on Ukraine fuels the energy crisis.

It’s hoped that a price cap will contain a crisis that is driving up prices for consumers and business. It could lead to rolling blackouts, shuttered factories and a deep recession over the winter.

As Europeans bolster their support for Ukraine in the form of weapons, money and aid, Russia has reduced or cut off natural gas to 13 member nations.

Standing in the way of an agreement at Friday’s summit is the simple fact that each member country depends on different energy sources and suppliers.

NEW YORK – U.S. President Joe Biden says the risk of nuclear “Armageddon” is at the highest level since the 1962 Cuban Missile Crisis.

Biden’s remarks came as Russian officials speak of the possibility of using tactical nuclear weapons after suffering massive setbacks in the eight-month invasion of Ukraine.

Speaking at a fundraiser Thursday for the Democratic Senatorial Campaign Committee, Biden said Russian President Vladimir Putin was “not joking when he talks about the use of tactical nuclear weapons or biological or chemical weapons.”

Biden added that “we have not faced the prospect of Armageddon since Kennedy and the Cuban Missile Crisis.”

KYIV, Ukraine – The head of the U.S. Agency for International Development has met with Ukrainian President Volodymyr Zelenskyy to discuss Ukraine’s humanitarian, economic and development needs.

At a briefing in Kyiv on Thursday, USAID director Samantha Power said that “this war will be won on the battlefield, but it is also being won in Ukraine’s ongoing efforts to strengthen its democracy and its economy.”

Power says her visit included meetings with Ukrainian farmers, civil society activists, journalists and groups that USAID has been supporting to identify and document war crimes.

Earlier in the day, Power announced that USAID has committed an additional $55 million to assist Ukraine with repairs to heating pipes and other infrastructure and equipment. USAID has since February given $9.89 billion in aid to Ukraine.

UNITED NATIONS – Russia is calling for a secret ballot next week in the U.N. General Assembly on a Western-backed resolution that would condemn Moscow for its “attempted illegal annexation” of part of four Ukrainian regions and demand an immediate reversal.

Russia apparently hopes it would get more support from the 193 nations if their votes are not made public.

The General Assembly has announced that its emergency special session on Ukraine will resume Monday when the draft resolution will be presented. Diplomats say they expect the vote on the resolution likely on Wednesday.

Votes on resolutions in the world body are traditionally public and illuminated with different colored lights on a large board which has the name of every country.

KYIV, Ukraine – The head of the U.N.’s atomic energy agency says it’s doubling to four the number of inspectors that it plans to deploy to the Zaporizhzhia nuclear power plant in a Russian-controlled area of southern Ukraine as fighting continues in the region, threatening its safety.

He said he would take up that issue and hopes of establishing a secure protection zone around the nuclear power station during talks with an unspecified “very high-level” official when he travels soon to Moscow.

Grossi emphasized that despite Russia’s proclaimed – and widely criticized – annexation of the Zaporizhzhia oblast, or region, the plant remains a Ukrainian facility that belongs to state-run company Energoatom.