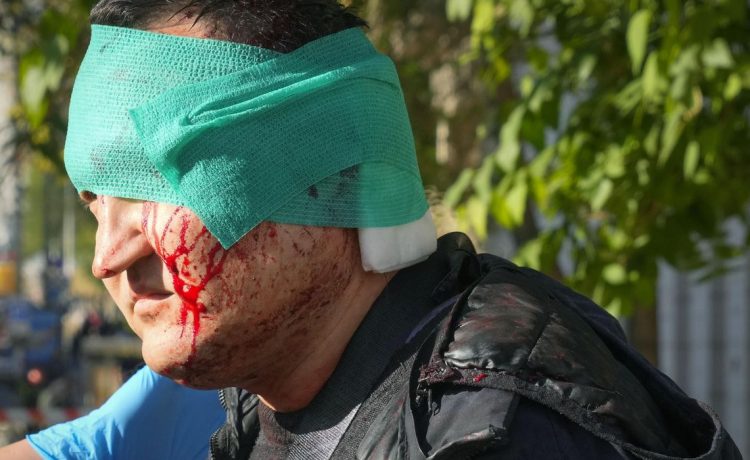 KYIV, Ukraine – Kyiv Mayor Vitali Klitschko says that there are casualties and damage to several objects of critical infrastructure as a result of strikes on the Ukrainian capital on Monday.

The strikes on Kyiv injured several residents who were seen on the streets with blood on their clothes and hands. A young man wearing a blue jacket was sitting on the ground as a medic wrapped a bandage around his head.

A woman with bandages wrapped around her head had blood all over the front of her blouse. Several cars were also damaged or completely destroyed.

Singer driven from Belarus for speaking out tries to rebuild

Follow all AP stories on the war in Ukraine at https://apnews.com/hub/russia-ukraine.

KHARKIV, Ukraine – The eastern city of Kharkiv was struck multiple times Monday morning, knocking out power in parts of the city.

Mayor Ihor Terekhov said that the energy infrastructure building was hit. There is no electricity and water in some of the districts of the city.

Local officials say that an electricity station was hit. Meanwhile there were also problems with internet.

The strikes come two days after a series of explosions rocked the city on Saturday, sending towering plumes of illuminated smoke into the sky and triggering a series of secondary explosions.

Kyiv Mayor Vitali Klitschko reported explosions in the city’s Shevchenko district, a large area in the center of Kyiv that includes the historic old town as well as several government offices.

Lesia Vasylenko, a member of Ukraine’s parliament, posted a photo on Twitter showing that at least one explosion occurred near the main building of the Kyiv National University in central Kyiv.

The spokesperson for Emergency Service in Kyiv told the AP that there are killed and wounded people. Rescuers are now working in different locations, said Svitlana Vodolaga.

Ukrainian media reported explosions in a number of other locations, including the western city of Lviv that has been a refuge for many people fleeing the fighting in the east, as well as Ternopil, Khmelnytskyi, Zhytomyr and Kropyvnytskyi.