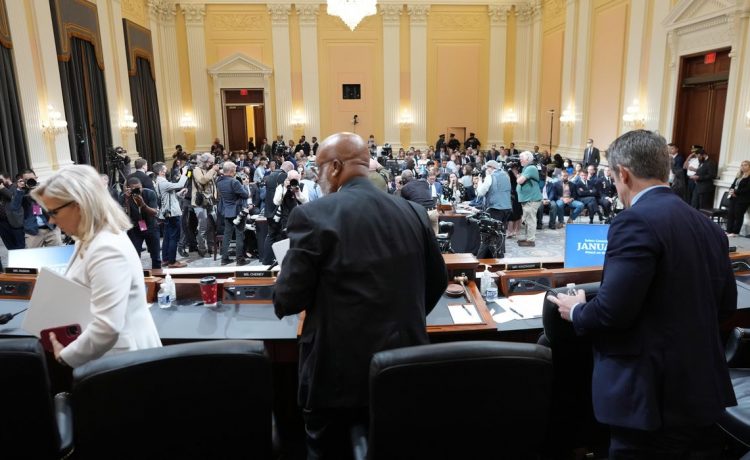 The House Jan. 6 committee defended the credibility of star witness Cassidy Hutchinson on Sunday and upped the ante after a roller-coaster week of bombshell testimony, saying criminal referrals against former President Donald Trump are a distinct possibility.

Rep. Liz Cheney, one of two Republicans on the committee, said the panel has “significant evidence” and more details about a range of issues, including Mr. Trump’s anger at not being allowed to go to the U.S. Capitol after he rallied with supporters at the White House Ellipse on Jan. 6, 2021.

Secret Service officials have said they are ready to dispute a story that Ms. Hutchinson — an aide to former White House chief of staff Mark Meadows — heard about Mr. Trump reaching for the steering wheel and lunging at an agent because they would not drive him to the Capitol ahead of the vote to certify President Biden’s victory in the Electoral College.

Ms. Cheney, of Wyoming, said “the committee is not going to stand by and watch [Ms. Cassidy’s] character be assassinated by anonymous sources.”

The other GOP member — Rep. Adam Kinzinger, of Illinois — said no one has disputed the core thrust of Ms. Hutchinson’s testimony, including allegations that Mr. Trump knew some of his supporters might be armed.

He said Americans should stay tuned for “way more information” in future hearings and that people come forward with information for the committee every day.

Ms. Cheney said there could be more than one criminal referral against Mr. Trump but the Department of Justice does not have to wait for lawmakers to weigh in on charges.

“Ultimately the Justice Department will decide that. I think we may well as a committee have a view on that,” Ms. Cheney told ABC’s “This Week.” “What kind of man knows that a mob is armed and sends the mob to attack the Capitol and further incites that mob when his own vice president is under threat? When the Congress is under threat? It’s very chilling.”

Mr. Trump and his allies have decried the Jan. 6 hearings as a one-sided witch hunt set up by Democrats and GOP opponents to sink his political future.

The ex-president is reportedly considering the launch of a 2024 presidential bid this summer. A criminal prosecution would put a major ripple in that plan, though it would also let Mr. Trump paint the probe as a politically motivated attempt to thwart his return to the White House.

Legal pundits have said the DOJ would face a high bar in attempting to prosecute the former president.

Rep. Adam Schiff, California Democrat, said declining to prosecute Mr. Trump because of his status would suggest that some figures are above the law.

“Donald Trump is someone who has shown when he’s not held accountable, he goes on to commit worse and worse abuses of power,” Mr. Schiff told CBS’ “Face the Nation.”

Ms. Cheney on Sunday said the point of the Jan. 6 hearings is to uncover the facts and not just scuttle Mr. Trump’s political fortunes, even if she has been blunt about her opposition to the ex-president.

“He can’t be the party nominee and I don’t think the party would survive that,” Ms. Cheney said.

She declined to say whether she plans to run for the GOP nomination, saying she is focused on the Jan. 6 committee and a tough reelection fight in Wyoming.

Panel members toured the Sunday talk shows five days after Ms. Hutchinson offered her account of events at the White House on Jan. 6.

Ms. Hutchinson, 26, had a front-row seat to White House reactions to the Capitol attack and offered testimony that painted Mr. Trump in a very poor light. She suggested the president knew people who gathered at the White House Ellipse, prior to the march on the Capitol, had weapons.

Secret Service officials have signaled that Mr. Ornato and other agents are ready to deny the account, raising a debate over who is credible.

Mr. Kinzinger was coy about what kind of corroborating evidence the committee but said Ms. Hutchinson was not in the vehicle and was relaying a story she heard. He also said other people heard a similar story about Mr. Trump’s actions that day.

“He clearly has information about concerns about criminal violations, concerns about the president going to the Capitol that day, concerns about the chief of staff having blood on his hands if they didn’t do more to stop that violent attack on the Capitol,” Mr. Schiff said. “Hard to imagine someone more at the center of things, and I hope that he will demonstrate the same courage we saw Cassidy Hutchinson display.”