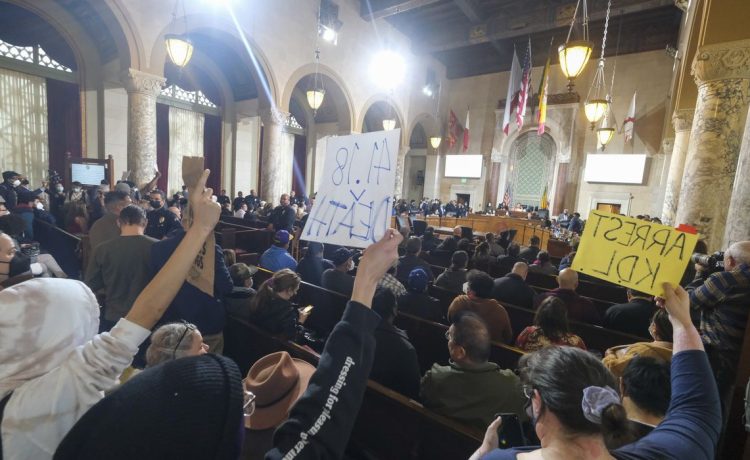 The furor over racist comments by Los Angeles City Council members at a closed-door meeting has exposed Democrats’ failure to live up to their self-professed title as the party of tolerance.

Democratic Councilman Kevin de Leon has resisted calls to resign, even from President Biden. Another Hispanic council member, Gil Cedillo, blamed the scandal on the two vastly different targets — former President Donald Trump and the left’s “cancel culture.” He complained that Blacks have too much representation on the city council compared with Hispanic residents.

Blacks in the city have responded with bitter condemnations against the offending Hispanic leaders in the nation’s second-largest city, and disbelief that not all of the council members involved have stepped down.

Mr. de Leon made a rare public appearance at a recent holiday party, donning a Santa hat, when he was confronted by critics shouting, “Resign! You’re a racist.” The confrontation ended with Mr. de Leon shoving a male activist onto a table and then to the floor, while his Santa hat flew off in a different direction.

When Mr. de Leon showed up at a council meeting on Tuesday, he was jeered by protesters who again demanded his resignation. Some council members walked out.

“Los Angeles City Council is in shambles,” said Compton Jay, host of the Revolutionary Blackout podcast, on Thursday. The show is run by a Black-led group of activists, organizers and political educators.

“In a democracy, the voters make the decision — not the peanut gallery,” he said on CNN.

That comment prompted James Fauntleroy, another host of Revolutionary Blackout, to respond, “The balls of this motherf—er to sit here and make a racist remark, an anti-Black remark in a city that has a sh— ton of Black people.”

“Years of receiving a public paycheck have jaded the councilman to the point that he has forgotten that he is supposed to be a servant,” Mr.  Petersen wrote in a blog post. “The public is nothing more to him than a way to hold onto the trappings of power.”

The uproar began in October when an audio tape surfaced of Mr. de Leon, Mr. Cedillo, then-Council President Nury Martinez and Los Angeles County Federation of Labor President Ron Herrera in a closed meeting where some of them made disparaging and racist remarks while they discussed redistricting maps.

Ms. Martinez said of Councilmember Mike Bonin, who is White, “Bonin thinks he’s f—king Black.” Mr. Bonin has adopted a Black son, and Ms. Martinez mocked him for appearing with the eight-year-old boy on a float in a Martin Luther King Jr. Day parade, saying he “handled his young Black son as though he were an accessory.”

She said in Spanish of Mr. Bonin’s child, “Parece changuito,” or “He’s like a monkey.” She also said the boy “needs a beatdown.”

“Mike Bonin won’t f—-ing ever say a peep about Latinos. He’ll never say a f—-ing word about us,” Mr. de Leon said in the recording.

Ms. Martinez has apologized and resigned. Mr. de Leon has said he is “profoundly sorry.” Mr. Cedillo served out the end of his term this month, saying it would have been wrong for him to resign when his transgression was to remain silent while his colleagues were uttering slurs.

“This modern version of McCarthyism is a danger to democracy, not a defense. It’s ‘cancel culture’ at its worst,” he said Monday. “My critics’ warped zealotry isn’t a sign of a growing movement for racial justice. It’s a glaring problem.”

He said the conversation with the other council members “crossed a line at several points, and I deeply regret not speaking up when it did. Both Black and Latino voices have been historically marginalized and silenced, and the subject can easily raise the temperature in a room.”

Mr. Cedillo said the issue of Census-based redistricting in the city “was especially difficult this cycle because former President Donald Trump and his lackeys intentionally intimidated immigrants so they wouldn’t fill out their Census questionnaires.” He said his district “‘lost’ untold thousands of residents, and I have yet to see the media outrage for that crime against our Latino communities.”

The White House has said that Mr. Biden believes all the city council members who took part in the racist conversation should step down. But White House press secretary Karine Jean-Pierre tried to draw a distinction between racism from Democrats and racism from Republicans.

“It’s been a disaster, a total catastrophe, a real nightmare covering the Biden White House,” Mr. Ateba said on “Tucker Carlson Tonight” on Fox News. “Right now I’m the voice of Africa in the U.S. But I can confirm that the level of discrimination against me and against African journalists in the White House is astounding, it’s disgraceful. You know, it’s been three months that we don’t have questions at the White House. Even as President Biden is about to receive 50 African heads of state in D.C. for the U.S.-African summit, she didn’t give us even a single question.”

Mr. Cedillo, the former Los Angeles councilman, complained about a perceived double standard among Democrats when it comes to racism. He said Blacks and the media treat Hispanic officials differently from Black leaders on the subject.

Mr. Cedillo pointed to the example of Los Angeles Mayor Karen Bass, who accused her rival in the campaign, Rick Caruso, of purchasing the endorsement of a local Hispanic political group.

“The largest Latino democratic club, one of the largest in the country, endorsed me,” Mr. Caruso said in their debate.

Ms. Bass later apologized: “I shouldn’t have said what I said.”

Mr. Cedillo said San Francisco Mayor London Breed, who like Ms. Bass is Black, “has a history of outlandish remarks about Latinos and Asians.”

“We [Hispanics] clearly are not being held to the same standards,” Mr. Cedillo said.