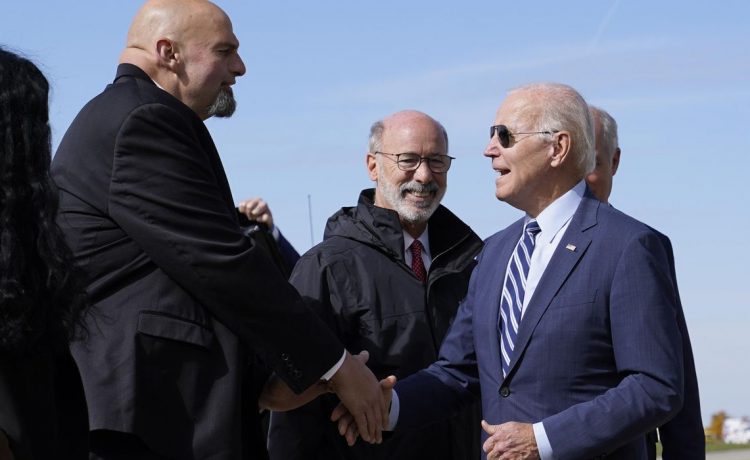 President Biden became defensive on Thursday when asked why so few Democrats have asked him to campaign with them ahead of the Nov. 8 midterm elections.

While on his way to Pennsylvania to campaign alongside the Democratic Senate hopeful Lt. Gov. John Fetterman, a reporter pressed him about why so few other candidates want to be seen with him.

The president’s sore spot was revealed on the South Lawn of the White House as he prepared to board Marine One to begin the Pennsylvania outing.

Democrats face stiff headwinds heading into the midterms with persistent inflation and an economic outlook that grows more gloomy by the day. That’s another reason Democratic candidates in tough races have not campaigned alongside the low-polling Mr. Biden.

Mr. Biden, who completed a three-state trip out west last week, notably steered clear of stops in Arizona and Nevada, where his presence could hurt Democrats in tight Senate races critical in determining which party controls the upper chamber.

The president’s swing through Pennsylvania with stops in Pittsburgh and Philadelphia is part of the administration’s full-court press in the state to drum up support for Mr. Fetterman in a crucial Senate race that will help determine which party controls the upper chamber.

Mr. Fetterman, whose health is under intense scrutiny since a stroke in May that left him with auditory processing difficulties. He’s in an increasingly tight race against Republican Mehmet Oz.

On Thursday, Mr. Biden appeared alongside Mr. Fetterman in Pittsburgh before both heading to Philadelphia for a closed-door fundraiser.

Next week, Vice President Kamala Harris will join the mix for another Democratic fundraiser in Philadelphia alongside Mr. Biden.

A reporter asked Mr. Biden while in Pittsburgh if he plans to travel to Nevada to campaign alongside Democrat Sen. Catherine Cortez Masto or Georgia to help Democrat Sen. Raphael G. Warnock.

SEE ALSO: Biden gets testy when asked if he supports any restrictions on abortions

“I’ve got about 16 to 18 requests” from around the country, Mr. Biden said, adding that his staff was still figuring out his travel plans.