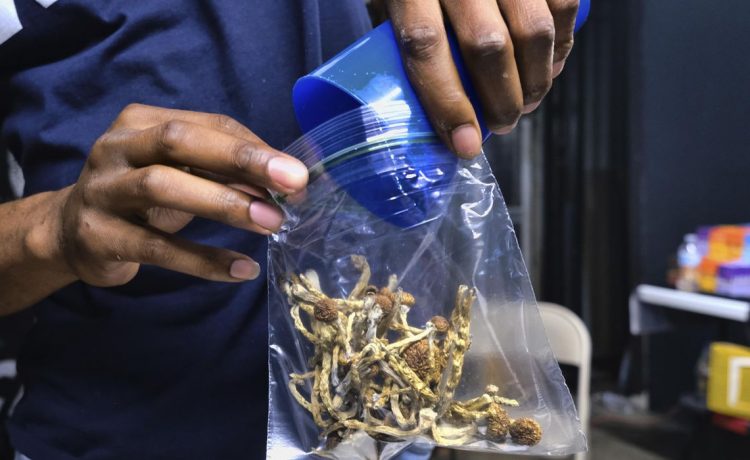 A new study of patients with hard-to-treat depression found that psilocybin, the active component in “magic mushrooms,” is capable of easing depression.

The study, published in the New England Journal of Medicine Thursday, looked at the effects that one of three dosage sizes of psilocybin had on 233 patients during and after a six-to-eight-hour single session.

Hallucinogenic mushrooms, also called “shrooms” informally, induce hallucinations and associated effects for a few hours, depending on the amount ingested. While the mushrooms can be dried and ingested in full or in capsules, the study used synthetic psilocybin instead.

The study is the “largest psilocybin therapy clinical trial ever conducted,” according to COMPASS Pathways, the company whose synthetic psilocybin researchers used in the trial study.

The 233 patients tested had what is known as treatment-resistant depression. 79 patients took 25mg doses, 75 took 10mg doses, and 79 took a one-milligram dose, according to the study.

Results for those in the highest and medium dosages were compared within the study to those with the lowest dosage. There were no control groups using placebo dummy drugs or standard antidepressants within the study, according to the Associated Press.

Use of psilocybin was accompanied by psychological support and therapy. 94% of the patients had no prior experience using psilocybin, according to COMPASS Pathways.

Depression symptoms declined in the short term among all three groups, with the best results occurring in the high-dosage group. Results were taken in intervals after the initial psilocybin dose to measure more long-term effects.

“COMP360 psilocybin has a true pharmacological effect … We look forward to starting our phase 3 programme later this year, moving us closer to providing COMP360 psilocybin with psychological support for patients who desperately need it,” said Guy Goodwin, chief medical officer of COMPASS Pathways.

Other scientists uninvolved with the study vouched for its results.

Anthony Cleare, a professor of psychopharmacology at King’s College London, told CNN that “The maximum effect [was] seen the day after receiving the treatment. This contrasts with standard antidepressants, which take several weeks to reach maximum effect.”

Negative side effects also occurred for many patients during their hallucinatory sessions.

“Adverse events occurred in 179 of 233 participants (77%) and included headache, nausea, and dizziness. Suicidal ideation or behavior or self-injury occurred in all dose groups,” the abstract reads, although the latter two symptoms occurred in patients with a history of those behaviors, The Associated Press noted.

One patient had to be sedated due to having a “bad trip,” according to the Financial Times.

Some scientists were also skeptical about the methodology and results of the trial.

“There were an uneven number of severely depressed patients in each group; with significantly fewer severely depressed people in the apparent ‘effective’ (25mg) dose group,” Ravi Das, a professor of educational psychology research methods and statistics at University College London, told CNN.

COMPASS Pathways is now planning a third phase, which will compare a 25 dose with a placebo in one trial, and will repeatedly dose patients on one milligram, 10mg, and 25mg tracks in a second trial.

No psilocybin trial has ever reached a third phase, which is considered the last step before an experimental drug can go before regulators to be approved.