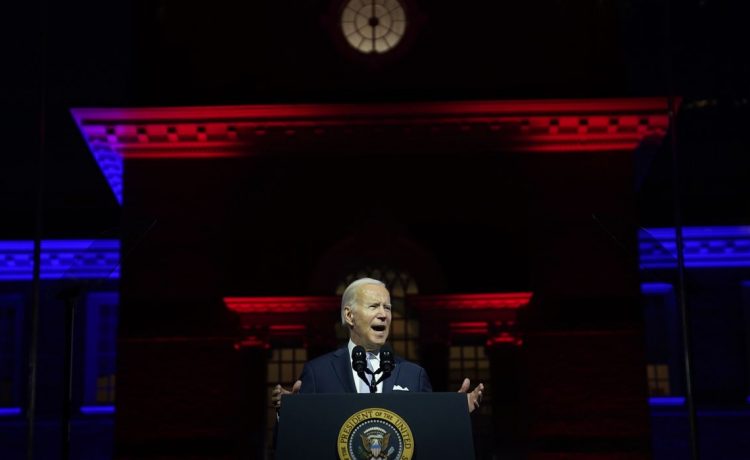 A majority of Americans think President Biden’s prime-time speech last week framing Republicans as anti-democratic extremists was a “dangerous escalation in rhetoric,” according to a new poll.

In a nationwide survey by the Trafalgar Group, 56.8% of respondents viewed the speech as dangerous and said it was “designed to incite conflict among Americans,” while 35% viewed the rhetoric as “acceptable campaign messaging” in an election year.

A few respondents, 7.7%, said they were unsure when asked to provide their opinion of the speech.

Among third-party and independent voters, 62.4%, viewed the speech as dangerous, compared to 31.2% who said it was acceptable campaign rhetoric.

The survey, which was conducted from Sept. 2 through Sept. 5, polled 1084 likely general election voters. The poll had a 2.9% margin of error.

In the speech last week in Philadelphia, Mr. Biden struck a somber note, framing the upcoming midterm elections as an eternal battle for “the soul of America.” He cast supporters of former President Donald Trump and his Make America Great Again movement as a threat to the nation’s rule of law, civil rights and standing in the world.

“Too much of what is happening in our country today is not normal. Donald Trump and the MAGA Republicans represent an extremism that threatens the very foundation of our republic,” Mr. Biden said.

He accused “MAGA Republicans” of refusing to recognize free and fair elections, talking about violence in response to political policies they don’t like and working to thwart “the will of the people.”

Mr. Biden tore into Trump loyalists for refusing to accept the outcome of the 2020 election, saying “democracy cannot survive” under their belief system.

The president took great pains to underscore that he wasn’t painting Republicans with a broad brush, but rather targeting Mr. Trump’s followers, whom he said “dominated” and “intimidated” mainstream Republicans.

While Mr. Biden campaigned on a promise to unite the country, his tough rhetoric raised fears that America has become even more divided on his watch.

The Trafalgar Group’s polling following the speech shows a stark divide among the parties on how the rhetoric was received.

Nearly three-quarters of Democrats polled, 70.8%, said the speech was acceptable campaign messaging while 18.7% said it represented “a dangerous escalation in rhetoric designed to incite conflict amongst Americans.” About 10% of Democrats said they were unsure.

An overwhelming majority of Republicans, 89.1%, viewed the speech as a dangerous escalation and just 4.7% said it was acceptable campaign messaging. About 6.2% of Republicans said they were unsure.

— Jeff Mordock contributed to this story