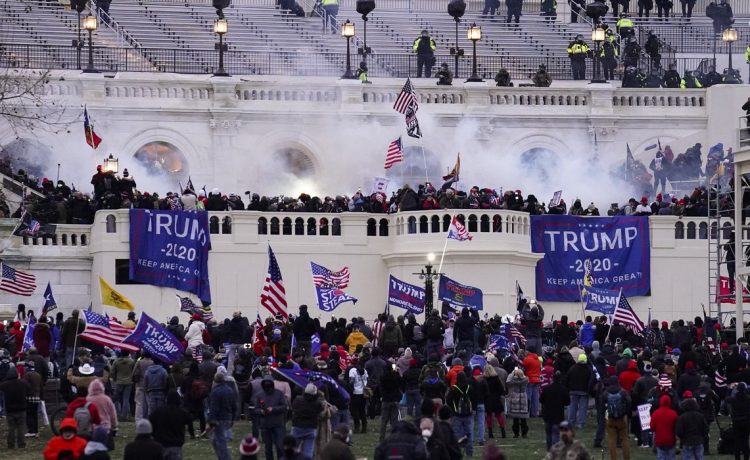 A Pennsylvania man pleaded guilty on Monday to attacking police officers and an Associated Press photographer during the Jan. 6, 2021 riot on the U.S. Capitol.

In a deal with prosecutors, Alan Byerly, 55, admitted to wielding a stun gun while confronting officers who were trying to protect the Capitol from the angry mob. He also admitted to assaulting AP photographer John Minchillo, who was documenting the chaos and violence outside the building where lawmakers were meeting to certify President Joe Biden’s election victory.

In exchange for pleading guilty to two charges stemming from the attacks, prosecutors agreed to drop several other charges Byerly was facing, including civil disorder. An email seeking comment was sent to his attorneys after the hearing in Washington’s federal court.

Federal guidelines recommend a sentence between about three and four years behind bars, U.S. District Judge Randolph Moss said. Byerly, of Fleetwood, is scheduled to be sentenced in October.

Byerly, who was arrested last year, is among three people who have been charged with assaulting Minchillo, who was wearing a helmet-style gas mask when he was pushed, pulled and punched by a group of men outside the Capitol. The assault was captured on video by a colleague.

Byerly was seen on camera standing behind a group of people who pulled Minchillo backward down a set of stairs leading up to the western front of the Capitol building, according to charging documents.

At the bottom of the stairs, Byerly and three other people grabbed the photographer and pushed, shoved and dragged him, authorities say. Byerly grabbed Minchillo with both hands and pushed him backwards before continuing to push and drag him away from the stairs, prosecutors say.

Minchillo found himself backed up against a stone wall by the attackers. Authorities say another man, Benjamen Scott Burlew of Miami, Oklahoma, lunged toward the photographer and shoved him over the wall, causing Minchillo to land on his back. Burlew was arrested last August and is scheduled to go to trial in October.

A third man charged in the assault was arrested in May. Rodney Milstreed is accused of grabbing Minchillo by his backpack and pulling him backward down the stairs and then shoving him. In a Facebook post a few days later, Milstreed said attacking the photographer was “worth it,” adding “Hit him with everything god give. The crowd cheered,” according to the court papers.

Authorities say shortly after assaulting Minchillo, Byerly approached police officers standing behind a row of bike racks who were trying to hold back the pro-Trump mob. Byerly approached the officers while holding up a stun gun and activated the weapon, but police were able to knock it out of his hand, prosecutors say.

Byerly continued to charge at the officers, striking and pushing them, and grabbed one officer’s baton, authorities said. Officers were eventually able to restrain Byerly, but he got away with the help of another rioter, according to charging documents.

Byerly is among more than 300 people who have pleaded guilty so far to federal crimes stemming from the riot. More than 840 people have been charged with crimes ranging from low-level misdemeanors to serious felony charges such as seditious conspiracy.