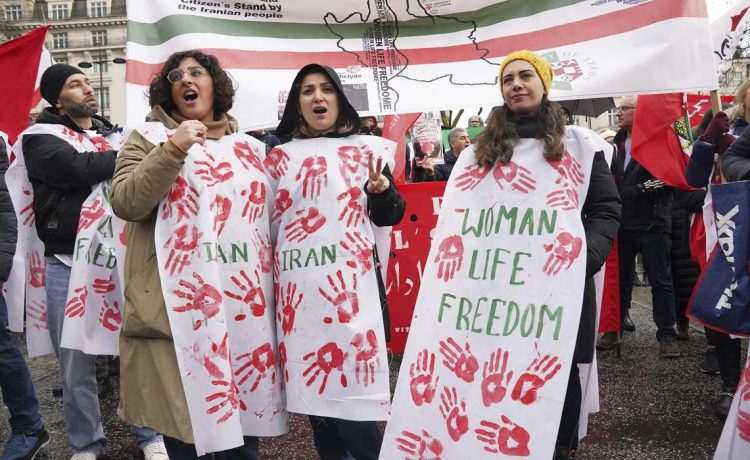 LYON, France — Hundreds of people marched Sunday in France to honor an Iranian Kurdish man who took his own life in a desperate act of anguish over the nationwide protests in Iran.

French police estimated the size of the crowd that gathered for Mohammad Moradi at about 1,000 people. They marched in the city of Lyon, where the 38-year-old Moradi took his own life in December, drowning in the Rhone river.

In videos in Farsi and French recorded before his death, Moradi criticized Iran’s leadership and called for solidarity from Western governments against it. The recordings featured him saying, “When you see this video, I will be dead.”

The protesters Sunday marched with placards that read “stop executions in Iran” and other slogans. Some traveled from other parts of France.

Hundreds of protesters also gathered in Rome and London in support of the Iranian protest movement.

Moradi arrived in France in 2019 with his wife and was pursuing a Ph.D. in history. His death resonated among the Iranian diaspora.

“Mohammad took his life with incredible courage,” said Lili Mohadjer, one of the Lyon march organizers, who addressed the crowd. “His hope was that the media and Western governments continue to support the Iranian people.”

The protests in Iran began in mid-September, over the death of Mahsa Amini. The 22-year-old woman died after being arrested by Iran’s morality police for allegedly violating the Islamic Republic’s strict dress code.

Women have played a leading role in the protests, with many publicly removing the compulsory Islamic headscarf, known as the hijab.

Sunday’s marchers in Lyon shouted Moradi’s name. They also observed a minute of silence for him and for two men that Iran said it executed on Saturday for allegedly killing a paramilitary volunteer during a demonstration.

Iran’s judiciary identified those executed as Mohammad Mehdi Karami and Mohammad Hosseini, making it four men known to have been executed since the demonstrations began in September. All have faced internationally criticized, rapid, closed-door trials.

In London, protesters waved Iran’s pre-revolutionary flag as they marched to Trafalgar Square and carried banners with pictures of demonstrators killed by the Islamic Republic’s authorities. They chanted “woman, life, freedom,” a slogan of the Iranian movement.

Outside the Iranian Embassy in Rome, demonstrators chanted “killers!” and stacked up boxes outside its closed doors containing signed petitions.

The Turin daily La Stampa spearheaded the collection of 300,000 signatures against what it decried as “unjust incarcerations, torture, death sentences of those in Iran demonstrating peacefully to change their own country.”

Turin and other Italian cities and towns also saw protests against Iran’s crackdown.

Among the demonstrators in Rome was opposition lawmaker Mara Carfagna. In a tweet, Carfagna decried the death sentences and “the brutal repression against women and young people.” She asked Premier Giorgia Meloni to press for a European Union initiative when the Italian leader meets in Rome on Monday with European Commission President Ursula von der Leyen.

Frances D’Emilio in Rome, Jill Lawless in London, and John Leicester in Le Pecq, France, contributed to this report.

This story includes discussion of suicide. If you or someone you know needs help, please call 988 in the U.S. or contact 988lifeline.org. Helplines in other countries can be found on befrienders.org.