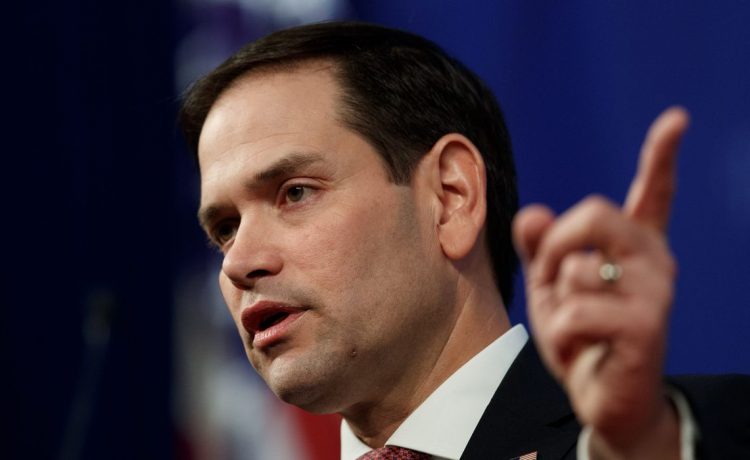 Democrat Val Demings and incumbent Republican Marco Rubio debated crime, inflation, hurricane damage, the economy and abortion in their only debate ahead of the Nov. 8 election, where the two are vying for a seat in the U.S. Senate.

Mr. Rubio, who is seeking a third term, came to the debate stage at Palm Beach State College in Lake Worth with consistent lead in the polls over Ms. Demings, who represents the 10th District in Congress and who has been unable to get ahead of her GOP opponent despite raising far more money.

But the race is considered competitive and the clash between the two on key issues was heated.

Mr. Rubio denounced “crazy policies that are coming from the left,” and said Ms. Demings has never passed a substantial bill outside of renaming post offices.

Ms. Demings accused her rival of “lying, cheating and trying to steal,” and she defended her legislation naming post offices after heroic figures.

The two clashed over abortion with Mr. Rubio saying that he is “100 percent pro-life” but has always backed exceptions to abortion restrictions. He said Ms. Demings backs taxpayer-funded abortion “on demand for any reason at any time, up until the moment of birth.”

Ms. Demings again accused Mr. Rubio of lying and said he is the extremist on abortion.

“Senator, you know you have said you don’t support any exception,” Ms. Demings said. Mr. Rubio responded, “What limits on abortion do you support?”

Ms. Demings said, “I support a woman’s right to choose up until the time of viability.”

Mr. Rubio called that “the vague line they all give.”

Abortion is considered an important issue in Florida, particularly among Democratic and independent voters, and Ms. Demings, 65, has tried to use the issue against Mr. Rubio.

She saw hopeful signs over the summer, when a couple of polls showed her within a point or two of Mr. Rubio — a statistical tie given polls’ error margins.

Her campaign attributed the uptick in support for Ms. Demings to campaign ads in which she rejected the far-left “defund the police” movement and promoted her tenure as Orlando’s police chief.

Mr. Rubio, 51, has tried to define Ms. Demings as a far-left politician who has abandoned law enforcement, rejected border security and sided with President Biden, who is unpopular in the state and is blamed for inflation and high gas prices.

The two argued about the state’s embattled property- and flood-insurance programs, which have been in a state of collapse. Ms. Demings said Mr. Rubio has done nothing to reform the state’s property insurance, which has become unaffordable for many after six companies have left the state.

Mr. Rubio cited roofing scams that have forced out many companies, but warned the federal government should not get involved, noting it has difficulty delivering the mail.

Ms. Demings accused Mr. Rubio of doing nothing to “get guns out of the hands of dangerous people,” despite several mass shootings in Florida occurring while Mr. Rubio has served in the Senate.

He has accomplished “nothing to help address gun violence and get dangerous weapons out of the hands of dangerous people,” Ms. Demings said, accusing him of using the Second Amendment as an excuse not to control guns.

“How long will you watch people being gunned down in first grade, fourth grade, high school, college, church, synagogue, a grocery store, a movie theater, a mall, at a nightclub,” Ms. Demings said. “He thought he would get a pass … and do nothing significantly about it.”

On immigration, Ms. Demings defined herself as supporting “a nation of laws,” and called for additional agents and to secure the border, but she also said those who come to the border should be allowed to claim asylum.

She called for more processors on the border to separate “those who need to be turned back from those who are asylum seekers.”

Mr. Rubio said Ms. Demings is calling for a system that will lead to a faster release of the thousands of illegal immigrants who cross into the United States every day.

“They’re usually held in detention for two to three days while you’re processing,” Mr. Rubio said. “What she’s arguing is ‘Let’s hire more processors so we can get them through faster.’”

Ms. Demings said Mr. Rubio has fallen short in his nearly 12 years in the Senate.

“What we have been left with is skyrocketing property insurance, lack of affordable housing, health care gone through the roof, we haven’t expanded Medicaid,” Ms. Demings said. “People are hurting and you know what, senator? When I talk to your voters around the state, they don’t know what you stand for.”

Ms. Demings said she backed a Democratic proposal aimed at expanding voting access by making it easier to cast a ballot in response to “unbelievable voter suppression efforts that were going on by the senator and his party.”