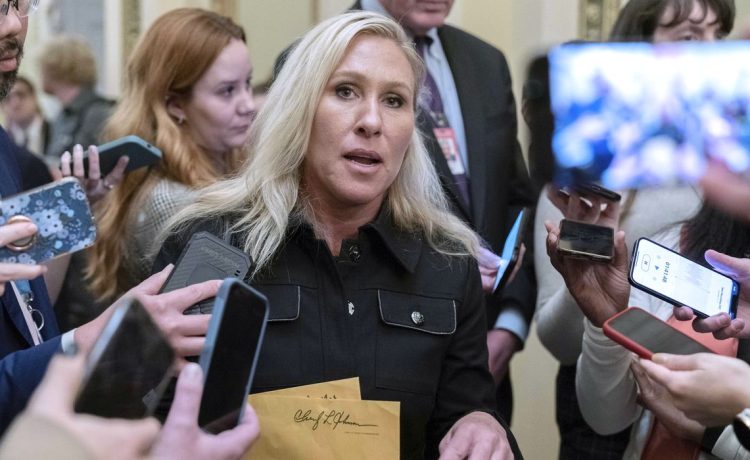 Rep. Marjorie Taylor Greene went from being an accused insurrectionist stripped of committee assignments as a freshman congresswoman to a key negotiator in the House Republican Conference who helped persuade fellow conservatives to vote to elect Speaker Kevin McCarthy.

She says her transformation is all in the eyes of the beholders.

“Now y’all are seeing who I really am. And I think people are finding out that this is the person I am, and they shouldn’t have treated me bad,” she told The Washington Times. “They shouldn’t have written all the stories they did about me. They should have found out who I am and written about this person versus all the garbage that’s really just political attacks.”

Since the conference nominated Mr. McCarthy for speaker in November, Ms. Greene has rallied on behalf of the California Republican through Tweets and private conversations with fellow Freedom Caucus members who withheld their support for him for more than four days and left the House in limbo.

So determined was Ms. Greene to help Mr. McCarthy finally win the gavel, she rang up one of the group’s top allies, former President Donald Trump, during a late-night vote on the House floor and pleaded unsuccessfully with one of the holdouts, Matt Rosendale of Montana, to take the call.  Ultimately, Mr. Rosendale voted “present” in the final ballot round, which helped Mr. McCarthy get the majority of votes he needed.

Ms. Greene cautioned conservatives that if they did not vote for Mr. McCarthy it threatened to empower Democrats. She even resorted to the scare tactic of warning that a prolonged speaker vote would open the door to “weak RINO, sell-out Republicans” joining with Democrats to elect former Rep. Liz Cheney to lead the chamber.

A day before Mr. McCarthy snagged the speakership, Ms. Greene excitedly talked about the deal on the table for the remaining conservative holdouts.

“Strike the deal. It’s great. It’s what any successful person does in business. You work a deal, strike the deal,” she said. “But I also say this. … We keep doing this garbage all the time going into 2024, we aren’t gonna get anybody to trust the Republican Party to win back the White House and the Senate.”

Ms. Greene showed other signs she is ready to soften her attack-dog reputation.

She offered a rare kind word on social media to longtime Democratic foe, Rep. Jamie Raskin of Maryland, who she often tangled with because he played a key role in impeaching Mr. Trump.

On Dec. 30, Mr. Raskin announced he was diagnosed with a form of lymphoma.

“We disagree often, but I’ll be praying for Jamie Raskin,” Ms. Greene tweeted. “Cancer is a terrible disease. I watched my father die from it, and it broke my heart. It’s good Rep Raskin has hope and his form of cancer is curable with the treatment he will be starting.”

“I’m grateful for your concern and very sorry to learn that you lost your father to cancer,” Mr. Raskin said. “Wishing you happy holidays with loved ones.”

By supporting Mr. McCarthy for speaker early on, Ms. Greene split early from many Freedom Caucus members such as Reps. Andy Biggs of Arizona, Scott Perry of Pennsylvania, Bob Good of Virginia and Lauren Boebert of Colorado.

Ms. Greene has explained that the early friction between her and Mr. McCarthy dissipated over two years of conversations in which they found common ground on a conservative agenda of House Republicans.

Ms. Greene, 48, was shunned by fellow lawmakers two years ago when the Georgia Republican first arrived on Capitol Hill. She was an outspoken and brash ultra-conservative who had bought into QAnon and other conspiracy theories floated on the internet.

A loyal supporter of President Trump, she was elected the year he lost his reelection bid, and protesters on his behalf, attacked the Capitol on Jan. 6, 2021, in an attempt to prevent the certification of President Biden’s win.

House Democratic, who had the majority in the chamber, took the unprecedented action to vote to remove Ms. Greene from her committee assignments over her past inflammatory comments and endorsing violence against Democrats in social media posts before her election to Congress.

Ms. Greene would later walk back those comments and apologize for condoning the violence. When asked recently about the QAnon conspiracy theory on Fox News Channel’s “Media Buzz,” she said that like many other Americans, she had gotten “sucked into” things she saw online.

“That was dealt with quickly, early on. I never campaigned on those things. That was not something I believed in, that’s not what I ran for Congress on, so those are so far in the past,” she said.

Eleven Republicans joined all 230 Democrats to back a resolution that removed Ms. Greene from her assignments on the Budget Committee and the Education and Labor Committee.

Rep. James McGovern of Massachusetts, the top Democrat on the Rules Committee who led the effort to kick Ms. Greene off committees, said he didn’t believe she was never a radical right-wing kook or that she has changed.

“Obviously, McCarthy has sold his soul to get votes, and the idea that he has to try to find ways to appease and please people like her, I think, is a sad commentary on where things are right now,” he said. “Don’t give her credit for being reasonable.”

Without committee assignments, Ms. Greene found other ways to spend her time on Capitol Hill.

“I talk to a lot of people. And so what people have seen out of me is I develop relationships. And that’s what I’ve done over the past two years. And I really had a lot of time to learn how things work,” she said. “Not having committees, honestly, was the best. I think as an incoming freshman, it’s probably good to have a little time on your hands to spend time watching the process and seeing what works and what fails.”

A month after losing her committee assignments, she began disrupting key Democratic legislation including a gun-control bill and President Biden’s $1.9 trillion spending bill by calling for a motion to adjourn. This required every member to stop whatever they were doing and come to the floor and vote on the motion.

The tactic angered Democrats, who ultimately passed their legislation, but also frustrated some Republicans who voted against the motions. At the time, Ms. Greene insisted she had overwhelming support in the conference. Mr. McCarthy never penalized her for it.

Even back then, Ms. Greene insisted that she had more support in the Republican conference than her foes would admit.

Despite her lack of committee assignments, Ms. Greene became one of the Freedom Caucus’ most active members over the last two years. She met with Mr. McCarthy on a routine basis and advocated for Jan. 6 detainees in the D.C. jail.

She also made key staffing changes.

In late 2021, she hired Ed Buckham as her chief of staff. Mr. Buckham served in the same post 20 years ago for House Republican leader Tom DeLay whose hardball legislative tactics earned him the nickname “The Hammer,” though the Texas congressman would eventually resign in disgrace and was convicted in 2010 of money laundering and illegal campaign finance schemes.

By contrast, Ms. Greene previously hired gay right-wing provocateur Milo Yiannopoulos as an intern in June. He became toxic among conservatives after defending pedophilia in 2017. He no longer worked for Ms. Greene as of early 2022.