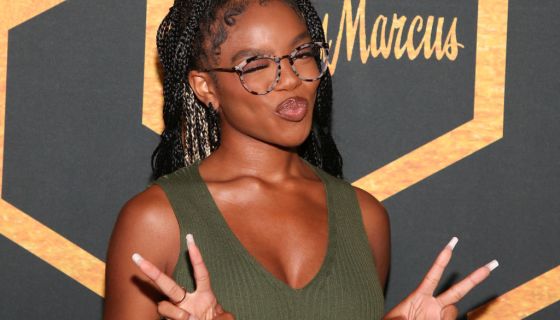 The theme for the affair was “Far Far Away” a kingdom in the Shrek universe, and Marsai and her celebrity guests were expertly outfitted for the occasion.

Marsai, born Caila Marsai Martin in Plano, Texas, took some time off from taking over Hollywood to celebrate herself at the lavish bash.

Marsai stunned in a custom forest green ball gown and dramatic overcoat crafter by celebrity designer Da Shoné By DaSh. She was also styled by Byron Javar and donned an orange wig via Jared “JStayReady” Henderson.

The always stunning Kelly Rowland posted her “Far, Far Away” away look via Instagram…

and later gave a sweet shoutout to Marsai who she labeled a “genius.”

and actress/comedic influencer Lala Milan nailed the party theme in a bedazzled pink ball gown before recounting a hilarious account of the night’s events on her Instagram.

and Skai Jackson who was styled by Monica Rose donned all black.

Never one not to stun, Lori Harvey wore a deep red bodysuit by designer Laquan Smith.

Also seen on the scene was songwriter Stacy Barthe and Puff Daddy’s youngest children “The Combs Twins”; D’Lila and Jessie.

City Girl “JT” posed for pics with the birthday girl in a pewter body-con dress with a built-in cone bra reminiscent of 1980s Madonna.

Marsai and her family know how to throw a party and that’s great news as Marsai will continue to have much to celebrate.

Marsai Martin Is Starring In A New Paramount+ Film