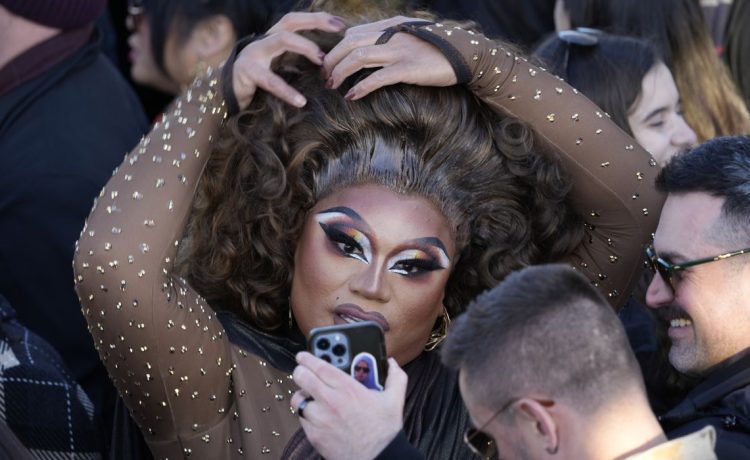 Marti G. Cummings, a New York City drag queen and political activist, and Brita Filter, who was featured on season 12 of “RuPaul’s Drag Race,” were among those in the audience for President Biden’s signing of the Respect for Marriage Act on the South Lawn.

Both performers shared photos afterward on social media that showed Brita Filter decked out in drag and Marti G. Cummings, who identifies as a “nonbinary drag artist,” wearing men’s clothes at the ceremony.

“Proud to be a drag artist in politics w my sister @thebritafilter representing at @whitehouse for the signing of the Respect for Marriage Act,” said Marti G. Cummings on Instagram.

The invitations from the White House drew pushback on the right from those who pointed out that the two have performed for children.

“Biden invited a drag queen to the White House today for the signing of the Respect for Marriage Act. This drag queen performs and puts on shows for kids. The Biden admin encourages this,” tweeted Libs of TikTok.

Drag queens Marti Cummings and Brita Filter at the signing of the so-called Respect for Marriage Act. pic.twitter.com/O9VjLA24VN

“Despite what conservatives say, this family friend[ly] event is a way to spread joy, teach acceptance & love,” said the post. “A way to bring people together. Kids just want to hear their favorite stories … keep spreading hate because I’m gonna keep spreading joy.”

President and Dr. Biden have invited renowned NYC drag artist Marti Gould Cummings to the White House for the signing of the Respect for Marriage Act. pic.twitter.com/qepHF8T9FV

Brita Filter, the stage name of Jesse Havea, drew headlines earlier this year for a performance during a chapel service at the Grace Church School in Manhattan.

“I am honored to be at The White House in full drag representing my community and witnessing this historical moment,” said Brita Filter in a Tuesday post on Instagram.

The newly signed law repeals the 1996 Defense of Marriage Act and requires states to recognize same-sex marriages performed in other states.

The Supreme Court made marrying a person of one’s own sex a constitutional right in its 2015 Obergefell v. Hodges decision.

But supporters were alarmed by Justice Clarence Thomas saying the court should reconsider the ruling in a concurring opinion earlier this year in Dobbs v. Jackson Women’s Health Organization, the decision that overturned the federal right to abortion.