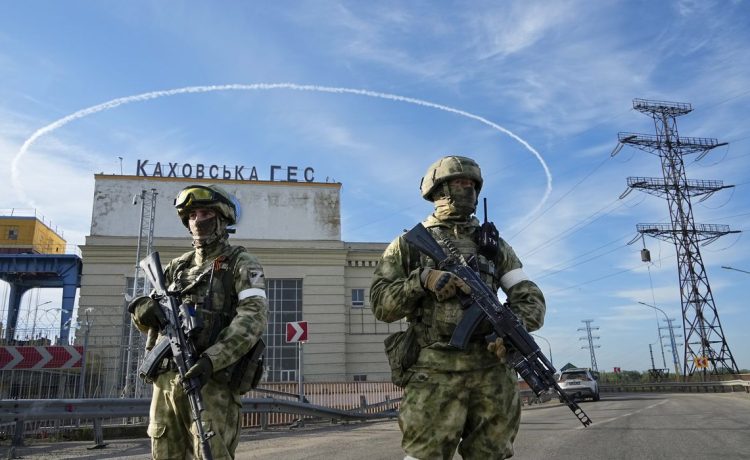 Russian military commanders said Wednesday their troops will retreat from the Ukrainian city of Kherson and set up defensive lines on the other side of the Dnieper River, marking perhaps the most embarrassing defeat for Moscow so far in the eight-month war and fueling hope that Ukraine may actually be able to recapture the bulk of its territory now in the hands of Russia and pro-Moscow separatist groups.

It was both a strategic and symbolic retreat — Kherson was one of the first major Ukrainian cities to fall to Russian forces in the days after the Feb. 24 invasion and had been the only regional capital still in the Kremlin’s hands.

Russian Defense Minister Sergei Shoigu ordered the withdrawal from Kherson after a meeting Wednesday with Gen. Sergei Surovikin, who leads Russia’s integrated forces in Ukraine. While Ukrainian officials quickly cast doubt on the sincerity of the announcement, Gen. Surovikin painted a bleak picture for Russian troops in Kherson, a city of about 280,000 and one that Russia has held since late February.

He said Russian troops could face “complete isolation” amid a Ukrainian counterattack that has pummeled Russian supply lines over the past several weeks, and he pleaded with Gen. Shoigu to reposition forces rather than fight a losing battle in Kherson.

“I understand that this is a very uneasy decision. At the same time, we will preserve … the lives of our service men and, as a whole, the combat capability of the group of forces,” he said, according to Russia’s state-run Tass News Agency. “In addition, this will release a part of forces and capabilities that will be involved in active operations, including for offensives in other directions in the zone of the operation.”

Mr. Shoigu agreed with the recommendation and ordered the withdrawal for “the life and health of Russian service men” inside the city. Russian media painted the move as a full withdrawal, with Russian personnel, vehicles, armaments and hardware being pulled from the city.

For Russian President Vladimir Putin, it’s arguably the most humiliating setback so far in his Ukraine campaign. The city of Kherson is located in a province of the same name, one of four provinces that Mr. Putin in September claimed to have “annexed” into Russia. Virtually every government on the planet rejected that supposed annexation, but the move signaled that Moscow was prepared to fight tooth and nail to control Kherson and other territories in southeastern Ukraine.

Instead, Russia appears to be walking away, at least temporarily. With a winter pause in operations looming, the recapture of Kherson could open up a major opportunity for Ukrainian forces to push past Kherson and perhaps all the way to Crimea, the peninsula which Russia forcibly annexed in 2014. Ukrainian President Volodymyr Zelenskyy has insisted that all Ukrainian territory, including Crimea, must be returned as a precondition for peace.

The Russian withdrawal will likely have another impact — strengthening the resolve of U.S. and Western nations to continue backing and bankrolling Ukraine in the fight. While Republicans before Tuesday’s midterm vote talked of taking a tougher line on administration and Pentagon requests for support for Kyiv, a key House Republican said the Kherson report was a strong argument for keeping the aid pipeline flowing.

“A Russian retreat will confirm what I and many of my colleagues have been stressing for months: with the right weapons, Ukraine can defeat Russia’s invading forces and further expose the absurdity of Putin’s attempted ‘annexation’ of Kherson and three other regions in Ukraine,” said Texas Rep. Michael McCaul, the ranking Republican on the House Foreign Affairs Committee and the likely chairman if the party re-takes the House.

“It is far past time for the Biden administration to provide Kyiv with all the weapons it needs, … to ensure Putin, and all aggressors, understand they cannot win unprovoked wars of aggression,” Mr. McCaul said in a statement.

The withdrawal from Kherson is the third massive, high-profile defeat for Russian troops in the war so far.

Last spring, Moscow abandoned a disastrous campaign to take the Ukrainian capital of Kyiv after its invading force ran out of food and fuel, leaving them exposed to Ukrainian air and artillery assaults. And in September, a fierce Ukrainian counterattack pushed Russian troops out of the northeastern city of Kharkiv, the second-largest city in the country.

Even before Wednesday’s official announcement from Moscow, U.S. defense officials were seeing signs that Russia was preparing for a withdrawal from Kherson. They cast the developments as further proof that Mr. Putin and his military leaders have failed to achieve virtually any of their major aims so far in Ukraine.

Speaking to the Defense Writers’ Group on Tuesday, U.S. Undersecretary of Defense for Policy Colin Kahl said the situation on the ground remains fluid, and the looming winter weather could complicate Ukraine’s counteroffensive.

“But I can say one thing with confidence, which is [that] Russia has already suffered a massive strategic failure,” he said. “That’s not going to change.”

“Putin has failed,” Mr. Kahl said. “Russia will emerge from this war weaker than it went in.”

But Ukrainian officials quickly raised doubts about the sincerity of the Russian move, openly speculating that perhaps Moscow was feigning a retreat in order to lure Ukrainian troops into an ambush in Kherson. Ukrainian presidential adviser Mykhailo Podolyak said on Twitter Wednesday that so far, Ukraine has seen “no signs that Russia is leaving Kherson without a fight.”

Yaroslav Yanushevych, Kyiv’s appointed governor in Kherson, told residents “not to give in to euphoria” yet before more evidence that the Russian withdrawal is actually taking place.

Despite that caution, other Ukrainian officials celebrated the announcement as proof that its counteroffensive is gaining momentum and that morale in the Russian ranks is sinking rapidly.

“For [Russia’s] army, retreating from Kherson might be the worst military defeat since 1991, as of now,” Anton Gerashchenko, an adviser to the Ukrainian Ministry of Foreign Affairs, wrote in a Twitter post Wednesday. “Kherson is strategically important. Not being able to hold it under the pressure of [Ukraine’s] army will worsen their positions in war. It can demotivate [Russia’s] population more than sanctions ever did.”

Earlier this week, for example, the Russian military blog Grey Zone published a letter allegedly written by members of Russia’s 155th Marine Brigade, who blasted military commanders after a disastrous attack on Ukrainian positions in the Donetsk province.

“As a result of the ‘carefully’ planned offensive by the ‘great generals’, we lost about 300 people killed, wounded and missing in the course of four days. (And) half of our equipment,” the Russian troops wrote, according to Reuters.

The Russian Defense Ministry publicly denied the claims that it had suffered massive losses in Donetsk.

But there have been a host of other such criticisms lobbed at Mr. Putin and his generals throughout the campaign. Moscow’s only major tangible successes in recent months have come in the form of attacks on Ukrainian energy and water infrastructure using Iranian-made drones. That drone campaign has knocked out power and clean-water stations across Ukraine over the past several weeks as the Kremlin seeks to use the coming winter season as a weapon against its foe.

Ukrainian leaders say that effort, too, will ultimately fail.

“We clearly understand: turning winter into a weapon is the plan of a terrorist state against our state, as well as against the whole of Europe,” Mr. Zelenskyy said in a televised address Tuesday. “But we are doing everything so that this Russian plan also fails, like various previous ones.”

— This article was based in part on wire service accounts.