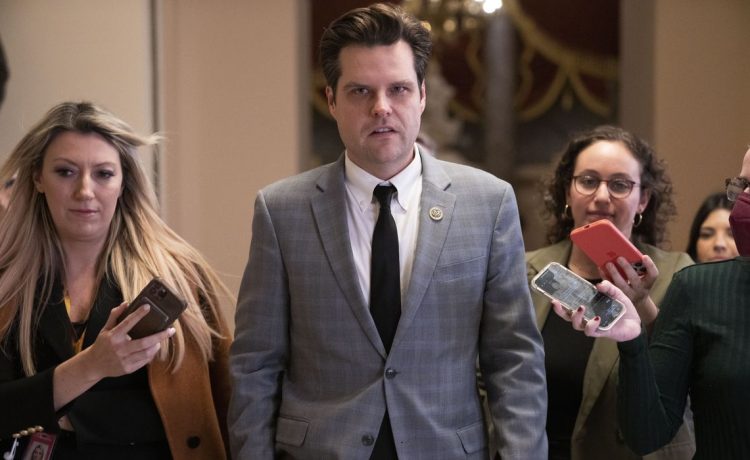 Rep. Matt Gaetz said now that House Speaker Kevin McCarty has won the chamber’s top job, it’s unlikely that he or the other GOP rebels will try to eject him, despite new rules making it much easier to toss the speaker out.

But Mr. McCarthy will face a threat to his leadership if he seeks retribution against those who tried to block him from wielding the gavel, Mr. Gaetz said, promising “mutually assured destruction,” within the slim GOP majority.

Mr. Gaetz, the Florida Republican who led the GOP rebellion, told The Washington Times that he believes none of the 20 conservatives who helped him try to prevent Mr. McCarthy from winning the gavel will make use of a new rule that allows a single lawmaker to call up a vote to eject the speaker.

“It’s very unlikely that the motion … will be used this Congress because it is in place,” Mr. Gaetz said in an interview. “Everybody is playing this hand with all their cards face up. Speaker McCarthy knows he has a four-seat majority.”

The reinstated rule was a top demand made by Mr. Gaetz and a band of 19 other Republicans who held back their support for Mr. McCarthy, delaying his election to speaker for nearly five days and leaving the House in a rare state of limbo.

Former Speaker Nancy Pelosi, California Democrat, got rid of the provision years ago and the conservative holdouts rejected Mr. McCarthy’s initial offer that would have reinstated the rule but would have required five people to call up a vote to eject the speaker.

It’s back to its original, centuries-old form, requiring just one lawmaker to call up such a vote and it now hangs out there as a possible threat to Mr. McCarthy if the Gaetz faction decides he’s straying too far from conservative principles, particularly on the effort to rein in federal spending.

Mr. Gaetz said that while he believes no one will try to push Mr. McCarthy out, the hard-fought change will serve as a check on him and the promises he made to win their support.

The motion to eject the speaker, known as a motion to vacate the chair, was among a long list of concessions Mr. McCarthy made to the rebels last week to end a historic 15 ballots of voting for speaker, a four-day ordeal that brought withering criticism from Democrats and even some in the GOP that the Republican takeover of the House majority was a chaotic mess.

Mr. Gaetz disagreed with critics. He said the negotiations yielded important changes to the House rules that will give conservative voices a greater say in the Republican agenda, more ability to rein in federal spending, and an increased presence on key committees.

“We know that he’s made strong commitments to us on certain policy, procedures, and specific personnel and if those commitments are honored, the House will be a stronger institution and Speaker McCarthy will be a more effective speaker,” Mr. Gaetz said.

Mr. Gaetz was among Mr. McCarthy’s most vocal opponents last week, at one point publicly accusing him of “squatting” in the speaker’s office before winning the gavel. The accusation, lodged at Mr. McCarthy in the House chamber, prompted cheers and laughter from Democrats.

Despite his relentless attacks on Mr. McCarthy last week, Mr. Gaetz said the rule change that makes it easier to eject the speaker keeps him safe from retribution from the most powerful Republican in the House.

“There’s no real fear of retaliation because there’s mutually assured destruction,” he said. “That’s why that was such an important provision. If there’s any effort to retaliate against me or to retaliate against anyone who took a principled stance, there would be tools at our disposal to dislodge leadership.”

Mr. McCarthy has assured the group of former holdouts there will be no punishment, such as losing their committee assignments.

In fact, one of the holdouts, Rep. Byron Donalds of Florida, was appointed to the GOP Steering Committee, which helps determine committee assignments and advises the leadership.

Others in the group are expected to win seats on the powerful Appropriations and Rules panels.

He said he spoke with the former president, who told Mr. Gaetz he was pleased with the outcome.

Mr. Gaetz said he plans to continue to foster his brand of being an “America First” Republican and will continue to tout the policies of the Trump administration.

“Trumpsim will far outlast Trump in our politics,” Mr. Gaetz said. “I’m here to make sure that we have a border that is secure, trade policies that are fair, and foreign policy that is focused.”