The Great Days > News > McCarthy detractor says others ready to challenge him, as GOP moderates call for party to unite
News

McCarthy detractor says others ready to challenge him, as GOP moderates call for party to unite 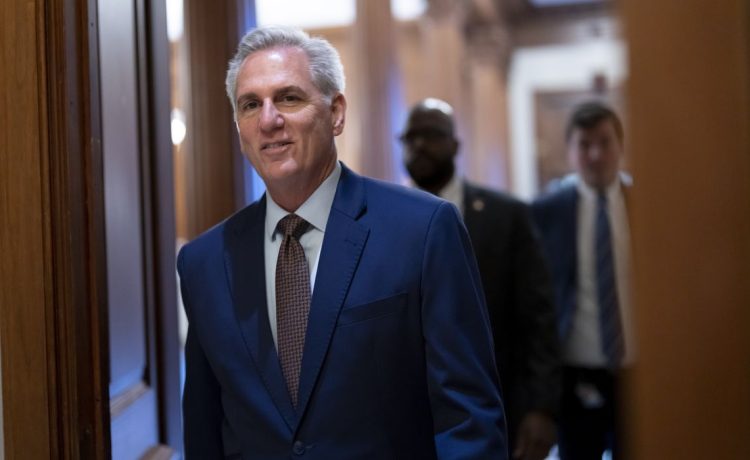 Republicans supporting House Minority Leader Kevin McCarthy to become speaker are calling for his detractors to unite behind him, but one of his main critics says others are ready to challenge the California Republican.

House Republicans nominated Mr. McCarthy to be speaker in a closed-door conference meeting Tuesday after he faced a last-minute protest challenge from Rep. Andy Biggs of Arizona, a former chairman of the ultra-conservative House Freedom Caucus. Mr. McCarthy easily defeated Mr. Biggs, 188 to 31.

But the challenge from the right flank was only to show that the California Republican has failed to attain the necessary 218 votes from the incoming slim GOP majority to win the speaker’s gavel in January.

In a letter sent to the conference Thursday from the Republican Governance Group, a faction of moderate GOP lawmakers, lawmakers called upon opponents of Mr. McCarthy to unite with the rest of their fellow Republicans for the sake of pushing their party agenda forward.

“If we do not immediately put the posturing aside and focus on responsible governance, we will have failed to fulfill the great responsibility they [voters] have bestowed upon us before the 118th Congress begins,” stated the letter, spearheaded by the group’s chairman, Rep. David P. Joyce of Ohio.

“Many of us — if not all — have newfound power in the slim majority we now find ourselves in,” the letter said. “But governing is fundamentally a team sport. It comes down to a simple choice: do you want to make a point or a difference? If your answer is the latter, then Kevin McCarthy deserves your full support.”

The letter continued, “We have many challenges to tackle as a team on behalf of the American people in these next two years. Our Democratic colleagues would only be too happy if we contributed to their efforts to derail our agenda with self-inflicted snags, like not rallying around our already elected leadership.”

However, Mr. McCarthy has continued to be dogged by several GOP lawmakers within the Freedom Caucus who say they will not support him for speaker on the floor of the House. Rep. Bob Good of Virginia and Mr. Biggs have been the most vocal in their concerns about Mr. McCarthy’s potential elevation to speaker.

Mr. Good told Steven K. Bannon in his War Room podcast last week that there is no way he would consider Mr. McCarthy for speaker, and there are other candidates being talked about for speaker now.

“They are competent, capable leaders that reflect the conservative center of the conference. There’s a number of good candidates that we can consider,” he said. “There’s quiet discussions going on for those candidates. Those can become public once the reality sets in that it’s not going to be Kevin.”

Only two prominent Freedom Caucus members are outspoken in their support of Mr. McCarthy, and one of them is a lawmaker that McCarthy cynics want as a candidate to run against him: Rep. Jim Jordan of Ohio.

Rep. Marjorie Taylor Greene of Georgia, the other pro-McCarthy Freedom Caucus member, cautioned her fellow Republicans that if they do not support Mr. McCarthy, Democrats may pull a maneuver and manage to elect outgoing Rep. Liz Cheney of Wyoming, since a person does not have to be a member of Congress to be speaker.

Her concern is that Democrats could nominate Ms. Cheney, since their caucus will not support whomever the GOP unites behind, and that there may be at least a handful of Republican lawmakers who will support Ms. Cheney.

“There will NOT be a Liz Cheney Speakership. She’s looking for a job, but she won’t get that one. Any Republican who would vote for Liz Cheney would be voting for Biden’s agenda,” she tweeted last month following a report that some Democrats were discussing nominating Ms. Cheney from the floor.

However, Mr. Good called such speculation unrealistic during an interview on the John Fredricks podcast.

According to Mr. Good, 10 to 12 Republicans are not ready to support Mr. McCarthy.

Mr. Good called it a “scare tactic” by Republicans supportive of Mr. McCarthy that Ms. Cheney or any Democratic lawmaker would win the speaker’s gavel over a Republican on Jan. 3.