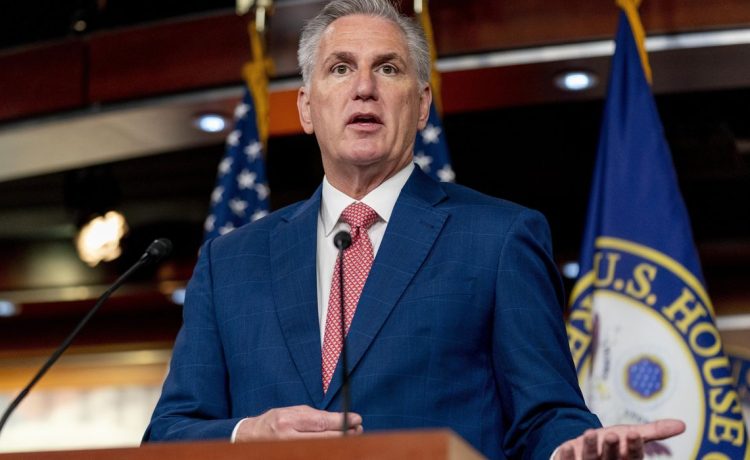 House Republican leader Kevin McCarthy is battling a handful of disgruntled conservatives who want someone else to govern their tiny House majority in 2023, and his refusal to cut a deal with the group is putting his quest for the speaker’s gavel in jeopardy.

Five Republicans say they’ll refuse to vote for Mr. McCarthy — a number that’s just big enough to sink his election on Jan. 3, when both Democrats and Republicans vote for the speaker.

The “fed-up five” are backed by the Freedom Caucus, which wants significant changes in the House rules to restore more power to rank-and-file lawmakers and put an end to runaway government spending.

The 57-year-old Mr. McCarthy has shown little enthusiasm for the rules changes the group is seeking, among them the restoration of a floor motion that would make it easier to remove the House speaker and another that would prohibit large, combined spending packages that Congress has passed nearly every year for two decades to fund the government.

Rep. Andy Biggs, an Arizona Republican, and at least two others in the group who oppose McCarthy say nothing can change their decision to vote against him, while an additional two Republicans may be open to voting for Mr. McCarthy if he agrees to the House rules changes.

The five, in addition to Mr. Biggs, include Reps. Matt Gaetz of Florida, Ralph Norman of South Carolina, Matt Rosendale of Montana and Bob Good of Virginia

The lawmakers say they are fed up with McCarthy, in part because Republicans underperformed on Election Day, falling far short of winning dozens of new GOP seats that polls had predicted.

Mr. McCarthy is also refusing to get on board with some of the more conservative proposals for cutting spending, including raising the retirement age.

The group also wants a speaker who will more aggressively seek the removal of top Biden administration officials despised by the right — including Attorney General Merrick Garland and Homeland Security Secretary Alejandro Mayorkas.

While several House races remain undetermined, it’s expected Republicans will control 222 seats in January which will provide Mr. McCarthy of California a four-seat majority and very few votes to spare when he runs for speaker and will need to win a majority of all votes cast on the House floor.

“Kevin McCarthy doesn’t have 218 votes and he’s still well short of that,” Matt Tragesser, a spokesman for Mr. Biggs, told the Washington Times.

Mr. Biggs ran for speaker against Mr. McCarthy in a closed-door GOP election earlier this month, picking up 31 votes. Overall, Mr. McCarthy lost 36 votes, although the number of defections is likely to shrink by Jan. 3.

House Republicans will vote this week in a closed-door meeting on all proposed rules changes for the new Congress, including those sought by the House Freedom Caucus.

The Freedom Caucus list includes reinstating the ban on spending earmarks, ending “same day” consideration of bills and requiring at least five days for lawmakers to read legislation before voting, and the restoration of targeted spending cuts that would allow Congress to cut money from programs or the salaries of federal employees they oppose.

“If McCarthy wants to be speaker, he needs to work with the Freedom Caucus to make sure that those changes are not only considered, but also implemented,” Cesar Ybarra, vice president of policy at the conservative group FreedomWorks, told The Times. “A lot of members of the House Republican Conference will follow McCarthy’s lead if he’s able to broker a deal with the House Freedom Caucus.”

But Mr. McCarthy has been reluctant to make concessions to Mr. Biggs and the rest of the small group of Republicans who oppose him out of concern it will empower them to make more demands, according to sources with knowledge of Mr. McCarthy’s thinking.

Republicans seeking changes to the House rules point out that past speakers have often negotiated with the rank-and-file members to get votes in the speaker’s election on the opening day of the new Congress.

“If McCarthy is smart,” one Republican source said, “he would know that this is the kind of risk he runs if he doesn’t accept some of these demands for changes. The writing’s kind of on the wall there.”

Still, Mr. McCarthy can pull off a win without the five GOP lawmakers if some of them vote “present,” which would lower the number of lawmakers who make up a majority in the chamber under the House rules.

“That certainly is a possibility,” Mr. Tragesser said. “But it would certainly be frowned upon and it has not been done historically, at a level like this.”