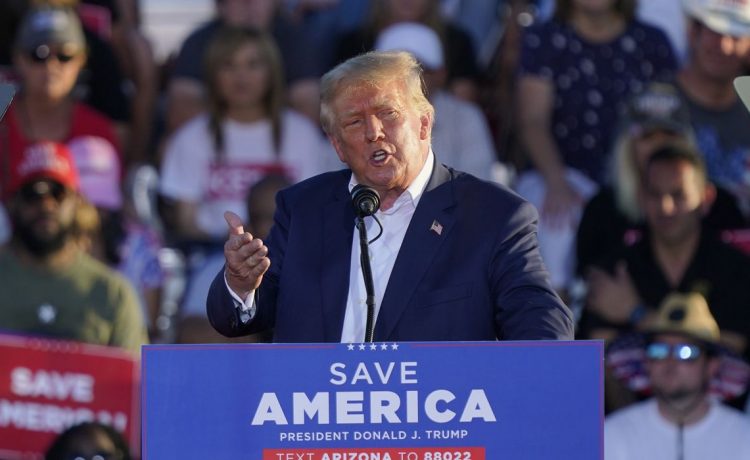 JACKSONVILLE, Fla. — He’s running … but when?

Everyone in Trump World is convinced the former president will launch a third White House run, but his team of advisers has different ideas about whether he should jump in right after the Nov. 8 elections or hold off for a while.

Complicating matters for former President Donald Trump is a looming criminal indictment that may be handed down over his role in the Jan. 6, 2021, attack on the U.S. Capitol and the removal of classified documents from the White House when he left office.

No matter what happens, say his closest allies, Mr. Trump is all in on 2024.

“He’s clearly going to be getting in the race for president, and shortly after the midterms,” a close associate told The Washington Times, requesting anonymity to discuss Mr. Trump’s plans.

The thinking goes, according to those in Trump’s inner circle, that the former president will launch his presidential bid off of big wins on Tuesday, when many of the 243 GOP candidates he endorsed nationwide, and who ran on his “America First” platform, are expected to prevail against their Democratic opponents in the midterm elections.

“President Trump is looking to a big victory for the America First agenda as part of the momentum that will carry him back into not only the race but into the White House,” the Trump associate said.

Mr. Trump hasn’t officially declared he will run, but he regularly drops big hints on his Truth Social media site or at the dozens of raucous “Save America” political rallies he has staged this year in support of GOP candidates.

The country is beckoning him to a second term, the former president often tells supporters, because only he can reverse the damage done by the Biden administration, which has presided over high inflation, rising energy prices, record illegal immigration and sinking stock portfolios.

“In order to make our country successful, safe and glorious again, I will probably have to do it again,” Mr. Trump told supporters at a recent rally in Texas.

Nobody knows the exact timing of Mr. Trump’s announcement and he is getting conflicting advice on exactly when he should get in.

“There are a lot of different perspectives,” another Trump adviser told The Times, including the view that Mr. Trump should “be a candidate in the shortest amount of time possible.”

Former Arkansas governor and GOP presidential candidate Mike Huckabee told The Times there are good reasons why Mr. Trump may want to delay an announcement.

“The very moment that they declare candidacy, they immediately subject themselves to all kinds of legal and accounting responsibilities with the Federal Election Commission,” Mr. Huckabee said on The Time’s “Countdown to the Midterms” livestream broadcast. “It gets expensive, it gets tedious and the longer that a person can hold off making that announcement, the better off they really are.”

But Mr. Trump appears poised to not follow that advice, say others who know the president well.

Kellyanne Conway, a former senior Trump administration official who continues to work closely with the former president, said last month that Mr. Trump plans to announce his candidacy before Thanksgiving, which is three weeks away.

On Thursday, she was less specific, telling reporters that he won’t wait very long after Tuesday’s election is over.

“I think you can expect him to announce soon,” Mrs. Conway told Washington reporters at a breakfast interview hosted by the Christian Science Monitor.

Mrs. Conway suggested members of his inner circle “who frankly need him for their next meal, and their next gig, and their next center of power” pushed Mr. Trump to declare his candidacy much sooner — before the midterm elections — which would have detracted from GOP efforts to retake the House and Senate.

“He would like to have announced by now, and I think the fact that he hasn’t is really a big credit to him and his restraint and him wanting to help with these midterms and not step on them,”  Mrs. Conway said.

Mr. Trump’s candidacy could be hobbled or potentially helped by Attorney General Merrick Garland, who is under pressure by Democrats to quickly indict the former president.

Democrats want Mr. Trump prosecuted over the Capitol riot, which they say was an attempted coup. Mr. Trump is also under investigation over the removal of classified material from the White House. The documents were seized on Aug. 8 in an unprecedented FBI raid on the former president’s office and residence at his private Mar-a-Lago club in Palm Beach, Florida.

An indictment could rally the base behind Mr. Trump, or it could dampen his overall support from a weary party base.

A poll released this week by Politico/Morning Consult found nearly half of Republican primary voters nationwide are either opposed or reluctant to back Mr. Trump if he runs for president a third time.

But Mr. Trump is by far the most popular GOP presidential candidate, according to nearly all 2024 polling. In the Politico/Morning Consult poll, he leads the next most popular choice, Florida Gov. Ron DeSantis, 49% to 24%.

Mr. Trump this week launched a final push for candidates he endorsed with a tour through four states to stump for Republican Senate hopefuls.

Mr. Trump, who lost the 2016 Iowa Caucus to Sen. Ted Cruz, but won the state in the 2016 and 2020 presidential elections, held a rally for Republican Sen. Chuck Grassley, a close ally who has helped shine a spotlight on the politicization of the Justice Department and its misguided probe of Mr. Trump spurred by a phony dossier linking Mr. Trump to Russia.

Mr. Trump will also campaign in Ohio for J.D. Vance, a Republican he helped propel into a race against Democrat Tim Ryan for the state’s open U.S. Senate seat, and in Pennsylvania, where Republican Mehmet Oz is in a neck-and-neck race with Democrat John Fetterman for U.S. Senate.

Mr. Trump’s planned rally in Miami on Sunday for Republican Sen. Marco Rubio raised new speculation about his rivalry with Mr. DeSantis, a potential 2024 candidate who was noticeably left off the list of rally attendees.

Mr. DeSantis has raised near-historic levels of funding in his bid for a second term as Florida’s governor. The money is flowing into his campaign in part because he is a top choice among wealthy GOP donors who want an alternative to Mr. Trump in 2024.

Ford O’Connell, a GOP strategist based in Florida with ties to both the Trump and DeSantis camps, said Mr. Trump’s final midterm rallies are aimed at ensuring big wins on Tuesday and are not about 2024. At least not yet.

“Trump’s going to run,” Mr. O’Connell said. “The idea that this is a shot across the bow against DeSantis is about generating headlines. Ron is probably going to run, too. Either way, your nominee is a Floridian. The only question is whether it’s Trump or DeSantis.”

Mr. Trump is clearly keeping Mr. DeSantis in his sights as a potential 2024 adversary.

In yet another signal he plans to run for president, Mr. Trump used his Truth Social media site to respond to a clip of Megyn Kelly, appearing on Blaze TV, discussing a potential presidential primary matchup between Mr. Trump and Mr. DeSantis.

“You really think the hardcore MAGA is going to abandon Trump for DeSantis?” Ms. Kelly asked. “They’re not. They like DeSantis. But they don’t think it’s his turn.”

Mr. Trump soon reposted the clip, adding his own commentary: “I AGREE!”

• Ramsey Touchberry and Dave Boyer contributed to this report.