Migrants using Catholic Charities to shield themselves from ICE 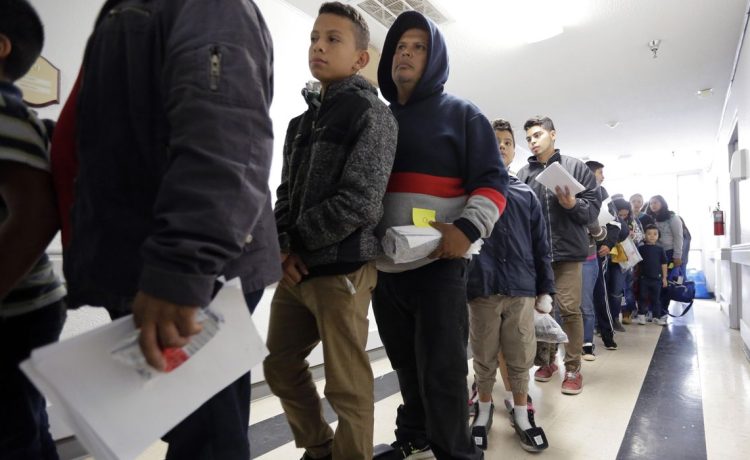 Immigrants crossing the border illegally are shielding themselves from ICE by listing Catholic Charities addresses as their intended destinations.

That makes it nearly impossible for U.S. Immigration and Customs Enforcement to serve them with their initial immigration court summons, gumming up the courts and giving the migrants a way to avoid the initial step in their deportation cases.

The result is when ICE does catch up, officers have to start the deportation process anew.

Catholic Charities and Homeland Security both acknowledged the practice is happening, but disagreed on who was to blame. The department said it has to accept any valid addresses migrants provide. The nonprofit group said it’s a symptom of a “broken” immigration system.

Immigration officers, though, said the nonprofit and the migrants appear to be acting in concert to shield the newcomers. The summons, officially known as a Notice to Appear or NTA, is what alerts the immigration courts that a migrant has been put into deportation proceedings.

“If we don’t serve a notice to appear to them, they aren’t placed into proceedings,” one officer said. “So the true backlog is not being accurately portrayed.”

That officer figured more than 10% of migrants in their region were using the tactic.

If that were true nationally, it would mean tens of thousands of migrants each month are using Catholic Charities and other nonprofits to avoid the initial steps in their deportation.

The issue could become even more pronounced as soon as this week when the Title 42 pandemic border policy, which had allowed the government to quickly expel some migrants, is slated to expire.

The number of new immigrants crossing the southern border illegally, which has already been running at a record-high sustained pace of roughly 7,000 a day, could double.

In October, roughly a third of immigrants without documentation encountered at the border were expelled under Title 42. Most of the rest were caught and released.

Some were served with immigration court summonses before release, but many were set free on “parole” with the expectation they would collect their summonses from ICE at a later time.

That’s where the bogus addresses come into play.

Before being released, the migrants are asked for their intended destinations so NTAs can be sent to them to start their deportation cases. They are listing real addresses, but ones at which they have no intention of living.

When ICE follows up with an NTA, it lands in a black hole.

For migrants who have valid asylum claims, it means they don’t get to prove their case. For the majority whose claims are bogus, though, it means they duck the first step on the path toward their eventual deportation.

“If you keep them off the docket there’s never a court hearing, which means the next time ICE gets them, they’re just then beginning that process. This is to delay as long as possible the removal of illegal aliens,” said Rob Law, who served as a senior official at U.S. Citizenship and Immigration Services in the Trump administration.

Catholic Charities said it became aware of the issue in April.

A spokesman said the issue “has caused us great concern,” and he said the situation extends to other nonprofit groups besides Catholic Charities.

“Incorrect addresses will cause those seeking asylum to miss court appearances and jeopardize their status because they may never receive their documents. It causes legal, logistical and resource concerns for Catholic Charities agencies. And it disrupts the docket by denying the court the ability to notify asylum-seekers about important court dates and proceedings,” he said.

The organization wrote a letter to President Biden and top congressional leaders in September demanding that Homeland Security stop using its addresses, and also asked for more federal money to welcome the migrants it is helping.

Catholic Charities said it has been in negotiations with Homeland Security and Mr. Gangluff said they believe the department is working on a fix.

The department gave no such indication in its response to The Times.

Indeed, Homeland Security said listing Catholic Charities or another nonprofit group will be accepted by border officers and agents as long as it is a “verifiable address.”

“Those who are released pending the outcome of their immigration proceedings must provide an address and follow strict immigration reporting requirements,” Homeland Security said in a statement to The Times.

“Those who do not have a supporter in the U.S. may provide the address of an NGO or other location in their destination city that may not be a residential address,” the department said.

The migrants are then supposed to update their addresses when they reach their destinations and check in with ICE.

For immigrants who got here illegally, counting on them to check in is often a vain hope. ICE follows up with its NTA, but if they aren’t at the address, it ends up going into a virtual black hole.

Mr. Gangluff said some Catholic Charities agencies will return ICE’s documents while others might flag the documents as “misaddressed” for the immigration court.

That does little for ICE, according to the officer, who said the immigration court case can’t begin until the document reaches the migrant.

Mr. Law also said Catholic Charities is off base in blaming the feds.

“Not only are they complicit in this, they’re actively encouraging the border crisis but they want to hide any level of public accountability,” said Mr. Law, who is now director of homeland security at the America First Policy Institute.

“This is what happens when you refuse to detain aliens and you rely on NTAs and alternatives to detention. It becomes this honor system, but when you already have a population that’s violated several immigration laws just to get to that point, you’re asking for further exploitation,” he said.

Mr. Abbott said legislation might be needed to rein in the NGOs.

And the Heritage Foundation earlier this month released a report showing that Homeland Security has essentially outsourced some of its border functions to NGOs in order to process and release migrants more quickly.

Heritage said it identified more than 30 NGOs that are involved in welcoming the migrants.

“Under the guise of altruism or humanitarian focus, they are the final leg of the smuggling network. They are the ones that are oftentimes being reimbursed by taxpayer dollars, they encourage illegal aliens to come here, and they become the landing spot,” he said.