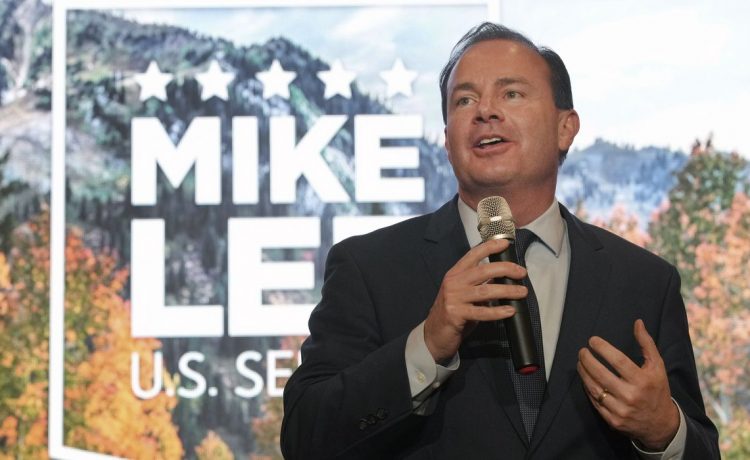 Sen. Mike Lee defeated two Republican challengers seeking to deprive him of a third term in the U.S. Senate, but he now faces a steeper challenge in November from an independent candidate with Democratic backing.

with 64% of the vote reported, Mr. Lee was leading with 59% of the vote. Former GOP state Rep. Becky Edwards trailed with 33% and tech executive Ally Isom was in third place with 8%.

Mr. Lee now faces independent Evan McMullin in November in a race that some analysts believe could be more competitive than is typical in the deep red Beehive State.

Mr. McMullin, who is a vocal opponent of former President Donald Trump, has the backing of the state’s Democratic Party, which took the unusual step of pulling its own candidate to bolster Mr. McMullin. Mr. McMullin ran against Mr. Trump in 2016 as an independent and picked up more than 20% of the presidential election vote in Utah.

Mr. Mullin has tried to tie Mr. Lee to Mr. Trump’s bid to stop Joe Biden from becoming president in 2020.

He seized on texts messages leaked to the media in April that show Mr. Lee on Nov. 7, 2020 offering “unequivocal support” to Mr, Trump’s chief of staff, Mark Meadows, “to exhaust every legal and constitutional remedy at your disposal to restore America’s faith in our elections.”

Mr. Lee’s support of the Trump campaign’s election challenge was short-lived and he voted to certify Joe Biden’s win on January 6, 2021,  but Mr. McMullin continues to accuse Mr. Lee of something akin to treason. “Mike Lee conspired directly with the Trump administration to overturn the 2020 election and override the will of the American people,” Mr. McMullin tweeted Thursday.

Mr. McMullin faces significant challenges in winning over the electorate in Utah, particularly as he tries to court Democratic and independent voters, while still trying to appeal to disaffected Republicans.

Utah voters have not elected a Democrat to statewide office since 1996.

Mr. McMullin voted for Mr. Biden and said he did not favor the Supreme Court overturning the 1973 ruling legalizing abortion. The high court overturned Roe v. Wade on Friday.

Mr. McMullin issued a statement pledging his opposition to  states that impose “extreme laws,” such as total bans on abortion, limits on birth control and “criminalization of women in desperate situations.”