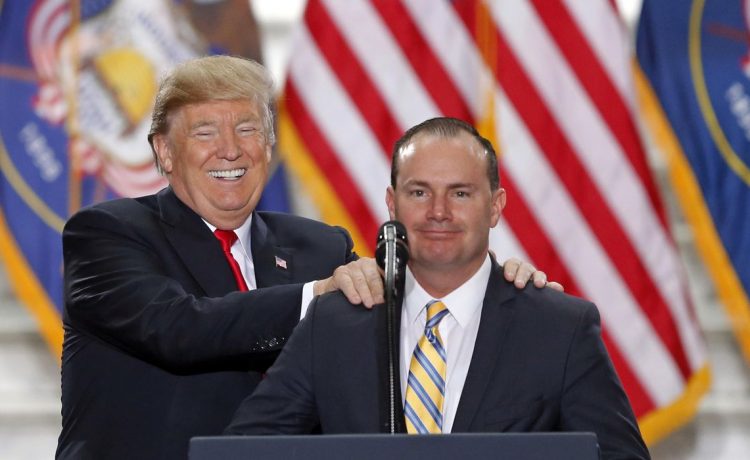 Sen. Mike Lee wants voters to know that when it comes to the former president, his work in Washington is not as in line with Donald Trump as many of his GOP Senate colleagues.

“Only two senators — Susan Collins and Rand Paul — voted less with President Trump than I did. I’ve stood against my party time and time again to oppose reckless spending,” Mr. Lee, a Utah Republican running for reelection this year, said during a debate this week. “I called [Mr. Trump] out in public and in private, on a train in the rain, with a Fox in a box, every time I got the chance.”

Mr. Lee distanced himself from the de-facto leader of the party amid a stronger-than-expected challenge from anti-Trump independent Evan McMullin, a former Republican and failed presidential candidate who boasts middle-of-the-road solutions to America’s problems.

The contest in Utah has been largely fixated on Mr. Trump.

“Lee is not very popular, and the Republican Party in the state of Utah is quite deeply divided, in large part because of Mitt Romney’s rather staunch opposition to Donald Trump,” said Utah State University political science professor Michael Lyons. “Lee did a very effective job of driving home the point that a victory for McMullin might conceivably enable the Democratic party control of the Senate. At times, I got the feeling Lee was debating Joe Biden himself rather than Evan McMullin.”

They spent nearly a third of their hour-long debate discussing the 2020 election or the U.S. Capitol attack. Mr. McMullin tried to capitalize on anti-Trump sentiment while Mr. Lee warned a vote for his opponent could mean more power for Democrats in Washington.

Observers never would have guessed that Mr. Lee cast his vote for Mr. McMullin’s independent presidential run in 2016 out of spite against Mr. Trump.

The debate’s most contentious moments came while discussing the former president. Mr. Lee acknowledged that President Biden won the election fairly but Mr. McMullin accused him of the “most egregious betrayal of our nation’s Constitution” for challenging the election results before ultimately voting to certify them. He called Mr. Lee a partisan “bootlicker” for the GOP and Mr. Trump.

Mr. Lee demanded an apology, shooting back that Mr. McMullin had a “cavalier, reckless disregard for the truth” and was forced to “adopt” the Democratic Party to make it as far as he has.

While Mr. McMullin is running as an independent, the Utah Democratic Party endorsed him over a field of its own candidate. He has vowed to be a one-man caucus and not join either party. Both of the chamber’s independent senators, Angus King of Maine and Bernie Sanders of Vermont caucus with Democrats.

Major polling for the race has been limited, but most surveys show Mr. Lee with a several point lead — sometimes double digits — that is usually outside the margin of error. An outlier came last week from Hill Research Consultants, which showed Mr. McMullin with a six-point lead.

While it is one of the most competitive races in decades in Utah, neither of the national parties believes it’s close enough to warrant major spending.

Notably, Utah Republican Sen. Mitt Romney has refused to endorse either Mr. Lee or Mr. McMullin, citing his friendship with both. This is despite a recent plea from Mr. Lee for him to “get on board” with his reelection, which has been endorsed by every other Senate Republican.

“I don’t think the endorsement matters one way or the other. I think they’re both tired of being asked about the endorsement,” said Boyd Matheson, a Utah radio host and former chief of staff to Mr. Lee. “Lee isn’t a big endorser, either.”

Federal fundraising records show that at the end of September, both candidates had roughly the same amount of cash in the bank: $1.4 million for Mr. Lee compared to Mr. McMullin’s $1.3 million. But the incumbent has eclipsed his opponent in total money raised with $9.7 million as opposed to Mr. McMullin’s $5.8 million.