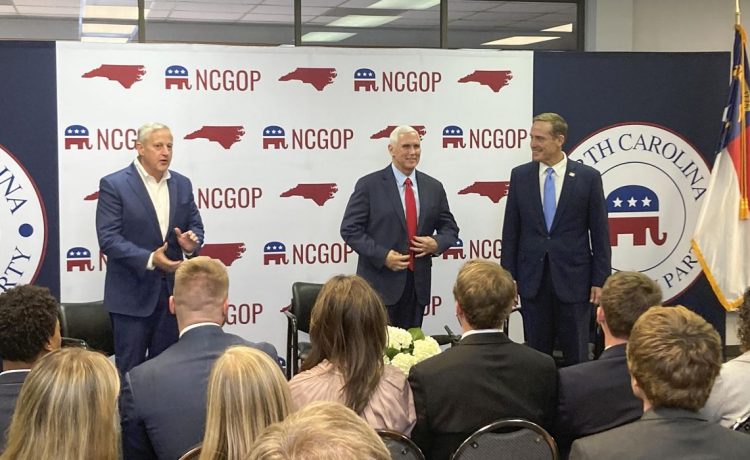 RALEIGH, N.C. — Former Vice President Mike Pence stumped in North Carolina on Wednesday in the final days before the midterm elections with U.S. Senate candidate Ted Budd, calling him one of the “strongest conservative voices” in the House, where he’s served for the past six years.

“I’m here to say just one thing and one thing only, and that is that North Carolina and America need Ted Budd in the United States Senate,” Pence said after he and Budd answered questions on the economy and education from state GOP chairman Michael Whatley before a few dozen Republican activists.

Earlier Pence attended a luncheon fundraiser for the Senate candidate, who is in a highly competitive race with Democratic rival Cheri Beasley. The race is one of several that could determine whether Democrats hold onto power in the narrowly divided Senate.

Pence became a leading target of former President Donald Trump’s ire after refusing to help him block certification of Democrat Joe Biden’s win while Pence served as the presiding officer of those formal proceedings on Jan. 6, 2021. The anger spilled over to Trump supporters, who considered him a turncoat.

Budd condemned the violence that prompted Pence and lawmakers to rush to safety that day. Still, he voted against certifying the election hours later. Months later, he called the insurrection a “bad day for America,” but also said it was “just patriots standing up.”

Pence has become increasingly in demand among Republican candidates in the midterms – an effort that is rebuilding his credentials within the GOP as he considers a 2024 presidential campaign. He’s been portrayed as someone who can help other Republican candidates win support beyond Trump’s voting base. Trump endorsed Budd for the Senate last year and has held two rallies this year to help his candidacy. Budd has said Biden is the elected president.

Pence called Budd a “man of integrity – his family, his faith, his commitment to conservative principles is known far beyond the state of North Carolina.”

Pence campaigned Tuesday with Georgia Gov. Brian Kemp, who also refused to help the defeated president overturn the state’s results in 2020. And he recently campaigned for Arizona Republican Senate candidate Blake Masters, who embraced Trump and his false narrative about the last presidential election.

During her own campaign event in Raleigh on Wednesday, Beasley said Budd shares the same “extreme” views as Pence when it comes to prohibiting abortion.

In the wake of the Supreme Court’s decision to strike down Roe v. Wade, Beasley, a former chief justice of the state Supreme Court, has made protecting abortion rights a significant part of her platform.

Pence “recently said that he doesn’t want to just make abortion illegal. He wants to make it unthinkable,” Beasley said in a downtown park surrounded by several dozen supporters. “The only thing that’s unthinkable is electing Ted Budd who wants to take away our rights.”

The question-and-answer session with Budd and Pence didn’t touch on abortion, focusing instead on criticizing the Biden administration for policies they said have contributed to high inflation and gas prices. “Everything they have done has driven this economy into a ditch,” Pence said. He and Budd didn’t address the media after their event at state GOP headquarters.

Members of Congress have campaigned in person with Beasley in recent weeks but not Biden, who has low approval ratings in the state. Former President Barack Obama last week endorsed Beasley, who would be the first Black U.S. senator for North Carolina if elected.

Budd has gotten in-person campaign support over the past week from U.S. Sens. Ted Cruz of Texas, Tom Cotton of Arkansas and Lindsey Graham of South Carolina.