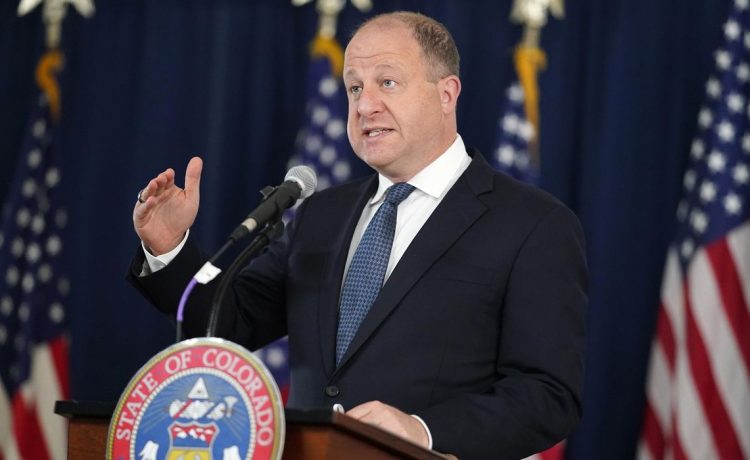 DENVER—Faced with the highest stolen-car rate in the nation, Colorado Gov. Jared Polis has sought to backtrack on a year-old law downgrading penalties for vehicular theft – and promptly ran into a Republican dragnet.

Republican Heidi Ganahl, who’s running to unseat Mr. Polis in November, pointed out that the Democratic governor himself signed last year Senate Bill 271, a sweeping sentencing overhaul that included a provision making it a misdemeanor to steal a car valued at under $2,000.

“In an election year about-face, Polis is now asking for his own law to be reversed,” said Colorado Republican Party chairwoman Kristi Burton Brown in a statement.

The episode encapsulated the challenge for Mr. Polis and Colorado Democrats as the state grapples with an avalanche of auto thefts after years of “soft-on-crime” measures, including repealing capital punishment, limiting cash bail, and making possession of fewer than 4 grams of most narcotics a misdemeanor instead of a felony.

Mr. Polis is favored to win a second term in a race rated “leans Democrat” by RealClear Politics, but Ms. Ganahl has hammered the governor on rising crime and drug overdoses. Lethal fentanyl overdoses soared by 260% from 2019-21, according to the Denver-based Common Sense Institute.

“Things are really bad in Colorado. A lot of people outside Colorado don’t understand how terrible things have gotten,” said Ms. Ganahl on Fox’s “The Ingraham Angle.” “We have skyrocketing crime, we’re number one in auto theft, we’re number two in fentanyl overdoses because Jared Polis made us a sanctuary state and has been soft on crime.”

She called the governor’s walk-back of SB 271 “embarrassing.” The governor’s office swung back by pointing out that the bill passed unanimously in the Senate, meaning that it garnered Republican votes and that the measure reflected the recommendations of the Colorado Commission on Criminal and Juvenile Justice.

“The governor is taking the lead on encouraging the CCJJ to align their approach with his goal of making Colorado one of the top ten safest states in five years,” said Polis spokesperson Katherine Jones. “In the interest of improving public safety in Colorado, he is pressing the CCJJ to reexamine some of the most pressing criminal justice issues, and also providing notice that if they do not act he will work directly with Republicans and Democrats in the legislature to reduce automobile theft.”

Mr. Polis asked the commission in a Sept. 15 letter to provide recommendations on “enhanced penalties associated with auto theft, including prolific auto thieves,” as well as the classification system for sentencing.

“The Commission should revisit the criminal classification of auto theft as it relates to the monetary value of a stolen vehicle and instead examine whether to elevate the severity of the crime based on the number of prior offenses, especially targeting prolific auto thieves,” said the governor.

Don’t be fooled… There’s NOTHING moderate about Jared Polis. Thank you @IngrahamAngle for having me on tonight to talk about just how dangerous and unaffordable @jaredpolis has made Colorado. #HeidiForGov #PolisIsTheProblem #copolitics @FoxNews https://t.co/8U4tOJw8Bc

Colorado led the nation in motor-vehicle theft last year with a rate of 661 thefts per 100,000 people, ahead of Washington, D.C., California and New Mexico, the Common Sense Institute said in a Sept. 8 report.

In the first six months of the year, Colorado saw auto thefts rise again by 17.3%, for a rate of 502 auto thefts per capita, placing the state ahead of every U.S. jurisdiction except Washington, D.C.

The theft rate has risen steadily since 2014, which is “not just some random year that was chosen,” said George Brauchler, an institute criminal justice fellow.

In 2014, before Mr. Polis took office, the state legislature reduced the penalties for thefts of vehicles worth less than $20,000 to a lower-level felony, which Mr. Brauchler characterized as a primary driver of the car-theft tsunami.

“That’s even before we got to the latest reduction, which eliminated $2,000-and-less vehicles from felony consideration,” said Mr. Brauchler, the former Arapahoe County district attorney. “You can call it correlation or coincidence or causation, it kind of doesn’t matter, because the timing is perfect. When we change the law to make it less punitive to steal a car, as it turns out, car thefts began to explode, and they’re continuing unabated.”

Four of the nation’s top 10 auto-theft cities are in Colorado – Denver, Aurora, Westminster and Pueblo – and not all of them are waiting for the state legislature to act.

In July, the Aurora City Council passed an ordinance providing a mandatory minimum 60-day jail sentence for first-term offenders and 120 days for repeat offenders. The city notched a 71% increase in car thefts from 2019-20 and 40% from 2021-22.

“It’s time to decide,” said Mr. Morrissey, an institute criminal justice fellow. “What are we going to do about auto theft in the state of Colorado? The people that pass the laws and the individual who signs the laws that get passed need to get serious about this.”

The RealClear polling average shows Mr. Polis leading by 11% over Ms. Ganahl, a member of the University of Colorado Board of Regents and founder of the Camp Bow Wow dog-daycare business.