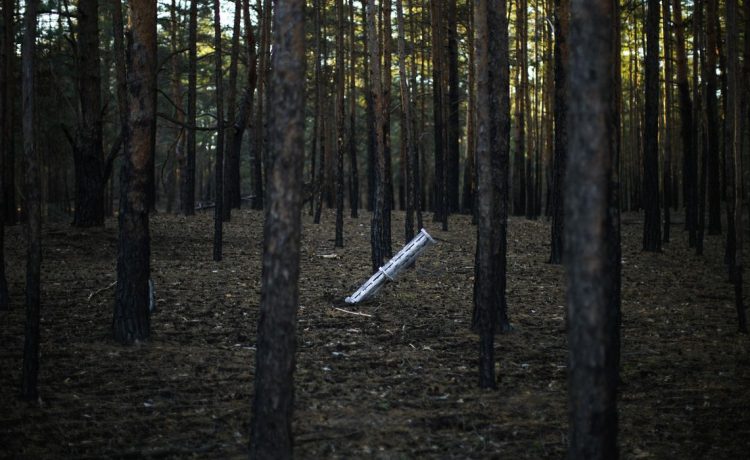 KYIV, Ukraine (AP) — The death toll from a missile attack on apartment buildings in a southern Ukrainian city rose to 11 as more Russian missiles and — for the first time — explosive-packed drones targeted Ukrainian-held Zaporizhzhia on Friday.

As the war sparked by Russia’s February invasion of its neighbor ground on, the Norwegian Nobel Committee awarded the Nobel Peace Prize to human rights organizations in Russia and Ukraine, and an activist jailed in Russian ally Belarus.

Asked by a reporter whether the prize shared by Belarus rights activist Ales Bialiatski, the Russian group Memorial and the Ukrainian organization Center for Civil Liberties should be seen as a “birthday gift” to Russian President Vladimir Putin, who turned 70 on Friday, committee chair Berit Reiss-Andersen said no.

“The prize is not addressing President Putin, not for his birthday or in any other sense, except that his government, as the government in Belarus, is representing an authoritarian government that is suppressing human rights activists,” Reiss-Andersen said.

Putin this week illegally claimed four regions of Ukraine as Russian territory, including the Zaporizhzhia region that is home to a sprawling nuclear power plant under Russian occupation; the city of the same name remains under Ukrainian control.

With its army losing ground to a Ukrainian counteroffensive in the country’s south and east, Russia has deployed Iranian-made drones to attack Ukrainian targets. The unmanned, disposable “kamikaze drones” are cheaper and less sophisticated than missiles but have proved effective at causing damage to targets on the ground.

The regional governor, Oleksandr Starukh, said Iranian-made Shahed-136 drones damaged two infrastructure facilities in the city of Zaporizhzhia, the first time they were used there. He said missiles also struck the city again, injuring one person.

The Emergency Services of Ukraine said the toll of Russian S-300 missile strikes on the city a day earlier rose to 11 and another 21 people were rescued from the rubble of destroyed apartments.

“This was not a random hit, but a series of missiles aimed at multi-story buildings,” Starukh wrote on his Telegram channel.

Russia was reported to have converted the S-300 from its original use as a long-range antiaircraft weapon into a missile for ground attacks because of a shortage of other, more suitable weapons.

The Ukrainian military said most of the drones it shot down Thursday and into Friday were the Iranian-made Shahed-136. The weapons are unlikely to significantly affect the course of the war, however, the Washington-based Institute for the Study of War said.

“They have used many drones against civilian targets in rear areas, likely hoping to generate nonlinear effects through terror. Such efforts are not succeeding,” analysts at the think tank wrote.

Meanwhile, Ukraine’s ability to capture and put back into service Russian tanks and other equipment continues to be an important factor in its forces’ push to repel the invasion.

Ukrainian forces have captured at least 440 tanks and about 650 armored vehicles since the start of the war, Britain’s Ministry of Defense said Friday.

“The failure of Russian crews to destroy intact equipment before withdrawing or surrendering highlights their poor state of training and low levels of battle discipline,” the British said. “With Russian formations under sever strain in several sectors and increasingly demoralized troops, Russia will likely continue to lose heavy weaponry.”

The Ukrainian military also said Friday that 500 former criminals have been mobilized to reinforce Russian ranks in the eastern Donetsk region, where Ukrainian forces have retaken some territory. The new units are commanded by officers drawn from law enforcement, the military said.

U.S. President Biden warned Thursday that Putin has driven the risk of nuclear “Armageddon” to the highest level since the 1962 Cuban Missile Crisis. Russian officials have spoken of the possibility of using tactical nuclear weapons to defend Russia’s territory, including the newly annexed regions of Ukraine.

Speaking at a fundraiser for the Democratic Senatorial Campaign Committee, Biden said Putin was “not joking when he talks about the use of tactical nuclear weapons or biological or chemical weapons.”

Turkish President Recep Tayyip Erdogan held another telephone call with Putin on Friday to discuss bilateral ties and the war in Ukraine.

Erdogan told Putin that Turkey was ready to fulfill its part in a “peaceful resolution of the Ukraine issue in a manner that would be to the benefit of everyone,” according to a statement from the Turkish leader’s office.

In the Czech capital, European Union leaders converged on Prague Castle to try to bridge significant differences over a natural gas price cap as winter approaches and Russia’s war on Ukraine fuels a major energy crisis.

As the Europeans bolster their support for Ukraine in the form of weapons, money and aid, Russia has reduced or cut off natural gas to 13 member nations, leading to surging gas and electricity prices that could climb higher as demand peaks during the cold months.