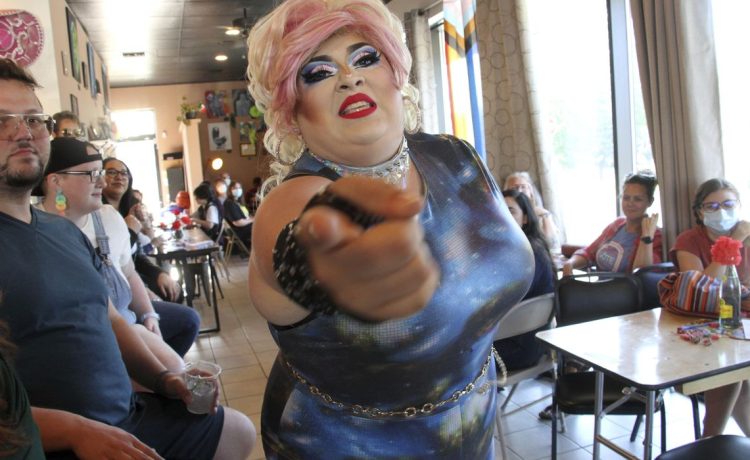 A concert venue in the suburbs of St. Louis has barred children from attending an “all ages” Christmas drag show, as states have moved to restrict cross-dressing public displays.

The Factory in Chesterfield announced hours before “A Drag Queen Christmas” that no ticket holders under 18 would be allowed to attend. The production is touring 18 states with performers from the reality television show “RuPaul’s Drag Race.”

“We specifically in the City of Chesterfield have ordinances. Protecting minors and not allow[ing] minors to be exposed to certain types of entertainment of a sexual orientation, etc.,” Chesterfield Mayor Bob Nation told news outlet KMOV on Wednesday.

The cancellation comes amid a growing backlash against the production and other “family friendly” drag shows, which critics argue sexualize young children.

Drag events advertising themselves as “family friendly” have sparked 141 protests in 47 states this year, the Gay and Lesbian Alliance Against Defamation (GLAAD) reported Friday.

In the St. Louis suburb, the mayor dispatched city police to control protesters and said the production would refund the money of children who had purchased tickets.

Protests against “A Drag Queen Christmas” have swept the nation this week in response to viral social media videos of the production’s recent Austin, Texas, performance.

The presence of children at the Austin performance underscores the reason for the protests, said Gregory T. Angelo, president of the conservative New Tolerance Campaign.

“As a gay man myself, I remain flummoxed that LGBT advocates seem fixated on this idea of drag shows for kids,” said Mr. Angelo, a former head of the Log Cabin Republicans LGBTQ group. “It would not be the end of the world or of the LGBT rights movement if folks hit pause and focused on issues of real consequence.”

According to GLAAD, at least 20 of this year’s protests against family drag events have occurred in Texas, where the backlash against “A Drag Queen Christmas” started.

Other disruptions in Texas included “significant threats” from neo-Nazi protesters at a drag brunch in Pflugerville, armed Proud Boys disrupting a drag bingo in Katy and protesters shouting “pedophiles” at events in Arlington.

Lawmakers in Arizona, Florida, Idaho, Michigan, Montana, Tennessee and Texas have filed or discussed legislation to ban drag shows for children in response to the protests.

Several Texas state legislators have proposed a “drag tax” that would reclassify any establishment hosting the performances as a “sexually oriented business.”

That classification, which levies a tax on every customer that enters an establishment, currently applies only to adult entertainment venues.

“Desensitizing kids to overt depictions of adult sexuality isn’t just inappropriate, it’s plainly dangerous territory that borders on the criminal,” Mr. Covey said in an email. “State legislators have a duty to protect vulnerable children from this politically-disguised evil.”

In Tennessee, lawmakers filed a similar bill the day after the midterm elections. It would define drag as an “adult cabaret performance” and classify drag queens with topless dancers.

“Costumes, dancing, and lip-synching are not inherently sexual,” Mr. Sanders said in an email. “Some other element would need to be present in a performance to make it adult-only.”

Anti-drag legislation is growing in popularity as “an element of the radical right’s culture warfare,” said Bob Witeck, president of the LGBTQ marketing firm Witeck Communications.

“It is indisputable that children are many times more likely to be sexually assaulted by a member of the clergy or a family member than be sexualized at a drag performance or book reading in a public setting that is intended to be age-appropriate,” Mr. Witeck said in an email.

Some parental rights groups disagree with this narrative, however.

“States with political will and common moral decency should take appropriate legal steps to stop children from exposure to drag queen shows,” Ms. Few said in a statement. “It is appalling that drag queen show organizers and others driving this agenda believe exposure to vulgar sexual conduct is acceptable for children.”

Part of the problem is the lack of a commonly accepted definition of “family friendly” entertainment, said Mr. Angelo, the New Tolerance Campaign president.

That makes it easier to understand the protests against “A Drag Queen Christmas” while rejecting any use of violence at them, he said.

“To the extent that legislators are able to define ‘family-friendly,’ that might be a good thing,” Mr. Angelo said. “We have a history of government intervention in the United States when children are at risk. To the extent we’ve seen drag shows that by any measure are not appropriate for children, it doesn’t surprise me that legislators would step in.”