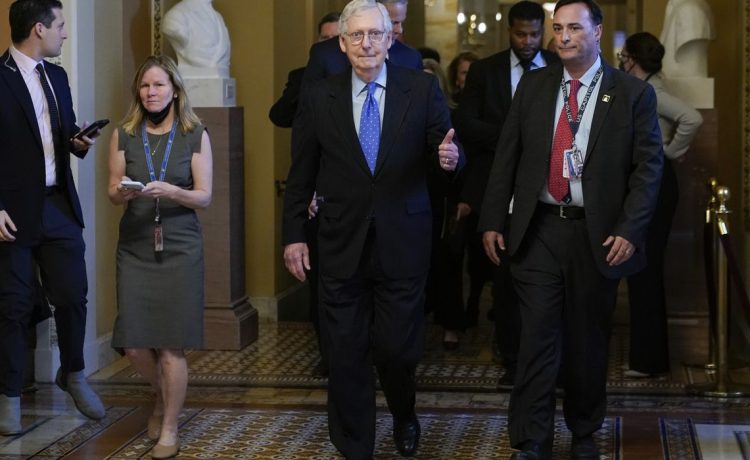 While Speaker Nancy Pelosi and House Majority Leader Steny Hoyer are stepping down after decades in top leadership posts, another octogenarian leader across the Capitol is pledging to stay in charge.

Senate Minority Leader Mitch McConnell, 80, who was reelected to a record-shattering ninth term as head of the GOP conference last week, will not be stepping aside from leadership, his top aides said.

The statement refutes speculation from anonymous Senate Republicans outside of his inner circle who are predicting Mr. McConnell won’t stick around for long in leadership but may remain in the Senate in another role, perhaps serving in a senior position on the powerful appropriations committee.

“If they had to bet money, if they were doing a pool, that would be what they would be betting on,” one Republican source said, characterizing the chatter among some in the Senate GOP world.

But Mr. McConnell appears to be settling in for the long haul.

“I’m not going anywhere,” he told reporters when asked if this would be his final term as leader after his victory in the closed-door Senate GOP leadership election. And those off Capitol Hill who are closest to Mr. McConnell’s thinking told the Washington Times that predictions of his departure are “wildly unfounded.”

His reelection came just as Mrs. Pelosi, 82, and Mr. Hoyer, 83, announced their plans to step aside from House Democratic leadership to allow for a new generation to take over. Mr. McConnell will turn 82 in February, which will make him among the oldest party leaders in the history of the Senate.

Some in his own party’s conservative base are clamoring for new blood and a new direction at the top of the Senate GOP.

Mr. McConnell earlier this month faced a mini-revolt within his conference from a group of Republicans who challenged his leadership following disappointing midterm election results that will relegate the party to the minority for another two years.

Sen. Rick Scott, 69, of Florida, who had been head of the Senate GOP campaign arm, picked up the support of nine Republican colleagues in his effort to unseat Mr. McConnell, representing a significant chunk of the 48-member conference.

Mr. McConnell won the race in a closed-door vote, 37-10, but it marked the first challenge to his leadership in 15 years and showcased growing discontent with the status quo among the party’s younger, conservative base.

Some in the party blamed Mr. McConnell for midterm losses after his well-funded super PAC shifted critical campaign cash away from states where GOP candidates had a shot at winning.

The Alaska Republican Party last month voted to censure Mr. McConnell for funding “divisive and misleading ads” against Ms. Tshibaka, who they have endorsed in the still-undecided race.

The PAC hardly shortchanged key swing races, however, pouring a record $178 million on advertising for the critical Senate contests in Georgia, Nevada, North Carolina, Ohio and Pennsylvania, where Trump-endorsed candidates were also on the ballot.

In addition to discontent within the Senate’s GOP ranks, Mr. McConnell faces a 2024 Republican presidential primary field led by former President Trump, who is perhaps his top political GOP foe.

The former president, 76, announced another White House bid last week and is likely to be the leading GOP primary candidate even if other Republicans jump in, some polling showed.

Mr. Trump’s entry into the Republican primary promises a constant clash with Mr. McConnell, who the former president has regularly attacked since Mr. McConnell blamed him for the Jan. 6, 2021, riot at the U.S. Capitol. Mr. McConnell also denounced Mr. Trump’s claim that the 2020 presidential election was stolen by Democrats.

Mr. Trump this month ramped up his criticism of Mr. McConnell after Mr. Bolduc and Mr. Masters lost their races, which not only cost the GOP the Senate majority but significantly diminished the former president’s clout in picking party winners.

Mr. Trump has lodged multiple racist attacks against Mr. McConnell’s wife, Elaine Chao, who served as Mr. Trump’s transportation secretary and resigned from office following the riot at the Capitol.

Mr. McConnell, Mr. Trump said, “blew the midterms, and everyone despises him and his otherwise lovely wife, Coco Chow!”

Mr. Trump has accused Ms. Chao of enriching the couple through her family’s U.S. shipping company’s ties to China, but the claim is unfounded.

Conservative media figures have also attacked Mr. McConnell, among them popular radio show host Mark Levin, who frequently criticizes Mr. McConnell and other longtime Senate GOP leaders as out of touch with the base of the party.

“It’s time for McConnell and this gang to go,” Mr. Levin said two days after the Nov. 8 election. “They take credit for raising and spending hundreds of millions of dollars and then blame conservatives (the base) when their efforts fall short. We don’t need any lectures from them.”

Those on Capitol Hill who are betting on Mr. McConnell’s departure say he could shield himself from conservative and Trump-world broadsides by departing the leadership but remain in office, where he’s in a position to take a top spot on the powerful Senate Appropriations Committee.

The position of ranking member was left open following Sen. Richard Shelby’s retirement and while Mr. McConnell is technically next in line for the top GOP post on the committee, Sen. Susan Collins, a Maine moderate and longest-serving female Republican in Senate history, is slated to take the job.

Aides laughed off the suggestion Mr. McConnell would try to pull rank on Mrs. Collins and wrest the position away from her at this point.

Meanwhile, Mr. McConnell’s election to a ninth term as GOP leader, a role he has served in since 2007, puts him in a position to become the longest-serving party leader in the Senate when the new Congress begins in January. That’s when he will overtake Michael Mansfield, a Montana Democrat who served as his party’s leader from 1961 to 1977.

Most in the GOP conference still support Mr. McConnell, who cemented his legacy in recent years by confirming dozens of conservatives to the federal bench and three justices to the Supreme Court.

What’s more, aides point out, the 2024 map puts 23 Democratic seats up for grabs, many of them in swing states, increasing the chances Mr. McConnell will soon be back in charge of a Senate Republican majority once again.

“There’s a lot to look forward to,” one GOP aide said.