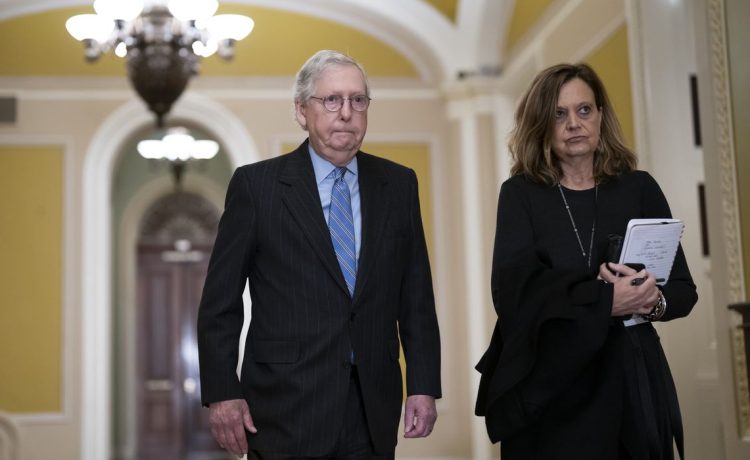 Top Democrats are vying to include a version of previously failed permitting reform by Mr. Manchin, West Virginia Democrat, in the National Defense Authorization Act (NDAA). That’s drawing a bipartisan rebuke for trying to add an extraneous measure that would fast-track energy projects and greenlight a long-stalled natural gas pipeline in his home state onto annual must-pass legislation.

“House and Senate Democrats are still obstructing efforts to close out the NDAA by trying to jam in unrelated items with no relationship whatsoever to defense,” said Mr. McConnell, Kentucky Republican. “The Democrats’ failure to plan ahead for unrelated liberal pet priorities should not be creating uncertainty and confusion for the brave service members who keep us safe.”

Progressives have likewise grumbled about Mr. Manchin’s permitting push because they argue it would undercut efforts to combat climate change by boosting energy projects of all forms — including fossil fuels. They are threatening to tank the NDAA in the House, where Democrats have a narrow majority if it includes Mr. Manchin’s provisions.

“If it’s the Manchin s—- sandwich made worse to appease Republicans, I’m not going to choke that down,” Rep. Jared Huffman, California Democrat, told The Washington Times.

House Speaker Nancy Pelosi tried to smooth over tensions Tuesday morning during a closed-door caucus meeting, according to attendees. The California Democrat made the case that permitting reform could reshape domestic energy transmission needed to transition from fossil fuels to renewables.

But it did little to assuage concerns, as Democrats said they were still in the dark about what leadership was considering as they continue NDAA negotiations.

“We all need to see what the hell it is, if it is in there,” Mr. Huffman said. “There are other ways to get [clean energy] transmission without greenlighting huge fossil fuel projects and setting us back in the climate crisis.”

Democratic leaders promised Mr. Manchin they would try to pass his crowned energy policy in exchange for his crucial support this summer of the party’s tax-and-climate-spending bill that was approved without any Republicans. But the bipartisan pushback is deja vu after Mr. Manchin was forced to strip his permitting reform from must-pass legislation in September to avert a government shutdown.

“A deal was made with Sen. Manchin by people other than us. I respect that, and I respect him for getting what he wants,” Ms. Jayapal said. “But I also believe that this is the will of the members, and we are responsive and responsible to our communities.”

Mr. McConnell also targeted Democrats for proposing to add bipartisan cannabis-related legislation to the NDAA that would allow the marijuana industry access to banking institutions and grants for states to expunge past criminal convictions over the drug.

“We’re talking about a grab bag of miscellaneous pet priorities, like making our financial system more sympathetic to illegal drugs or permitting reform in name only that’s already failed to pass the Senate earlier this year,” he said.