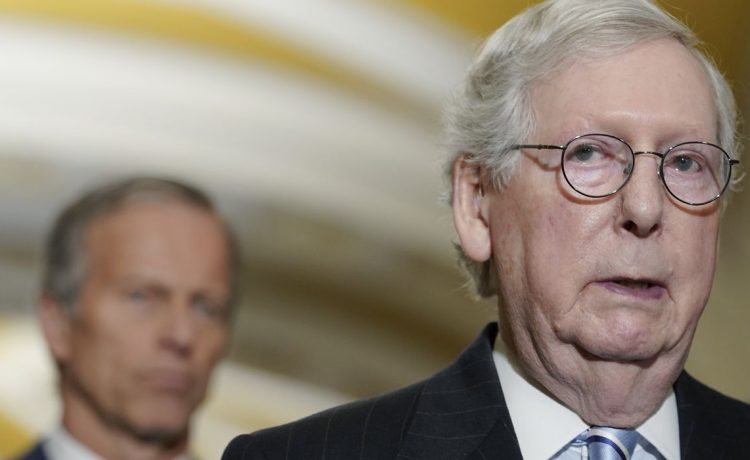 Senate Minority Leader Mitch McConnell said Tuesday that congressional negotiators were near an agreement to fund the federal government with a massive year-end spending bill, despite demands from fiscal conservatives to punt budget talks to January when the GOP takes control of the House.

The Kentucky Republican rebuffed such a strategy, which would tee up a partisan fiscal showdown in the new year, arguing that the GOP neither controls the White House nor Congress but was still successful in limiting out-of-control spending by Democrats.

Mr. McConnell said the two sides were very close to reaching a deal that would be “broadly appealing” and meet Republicans’ desires for defense spending while rejecting additional funding for Democrats’ domestic priorities.

The move is sure to draw criticism from Republicans on both sides of the Capitol, some of whom have accused Senate Republican leadership of consistently rolling over for Democrats when it comes to big spending bills.

“What I would say is, I’ve been the majority leader and I’ve been the minority leader. Majority is better. [Senate Majority Leader Charles E. Schumer] is in charge of the floor, he determines whether or not we pass individual appropriations bills, and he decides how to process it,” Mr. McConnell told reporters. “We’re on defense. We’re dealing with the cards that we were dealt.”

Mr. Schumer, New York Democrat, concurred that they were nearing an agreement.

Congress plans to pass a one-week stopgap funding measure to avoid a partial shutdown at midnight Friday. The extra time will allow lawmakers breathing room to finalize spending for the rest of the fiscal year that ends Sept. 30.

“Given the fact Democrats have the presidency, the House and the Senate, to meet our defense number and to not pay any bonus to the Democrats on the domestic side… is far and away the best we could do, given the fact that we don’t control the floor or the government.”

But Mr. McConnell’s approach sharply diverges from the strategy pushed by fiscal conservatives and House Republicans, including Minority Leader Kevin McCarthy of California. Many Republicans say the party should only support government funding into January so they can leverage their majority in the House during the next Congress.

“For the Senate to ram through a so-called ‘omnibus’ bill — which would fund the entirety of the [Democratic] spending agenda through most of next year — would utterly disempower the new Republican House from enacting our shared priorities,” a half-dozen Senate Republicans wrote to Mr. McConnell in a letter last week.