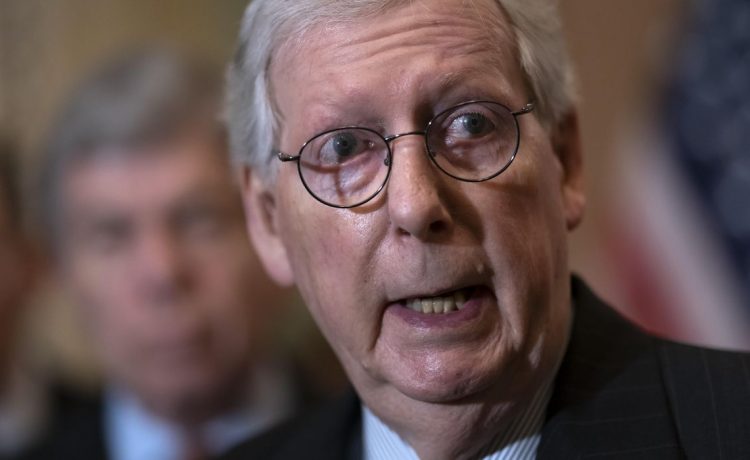 Senate and House negotiators have remained deadlocked over the final passage of the U.S. Innovation and Competition Act, or USICA, which includes a $52 billion incentive for semiconductor manufacturers to build production plants in the U.S., a marquee measure that is largely supported by lawmakers on both sides of the aisle.

But the Kentucky Republican is digging in against the Democrat spending bill.

“Let me be perfectly clear: there will be no bipartisan USICA as long as Democrats are pursuing a partisan reconciliation bill,” Mr. McConnell said on Twitter.

President Biden has pressed Congress for quick passage of the sweeping legislation but final negotiations to work out key differences between the two versions have stalled for months.

Democrats are, separately, working to cut a deal on a trimmed-down version of President Biden’s $1.75 trillion social-welfare bill, which flopped late last year.

Mr. McConnell’s warning signals an uphill battle for Democrats hoping to get the bill over the finish line soon, and puts the president in the tough spot of having to balance his domestic spending agenda with his tough-on-China aims.

The shot across Democrats’ bow drew a swift response from White House press secretary Karine Jean-Pierre who accused the Republican leader of holding the China competition bill hostage “to protect the ability of big pharmaceutical companies to price gouge.”

One element of the Democrats’ legislation would give Medicare more negotiating power against pharmaceutical manufacturers.

“This takes loyalty to special interests over working Americans to a new and shocking height.”

“We are not going to back down in the face of this outrageous threat,” she said.

The Senate’s $250 billion USICA passed in June with the support of 18 Republicans and 50 Democrats.

House Republicans railed against the bill, which passed 222 to 210 in February, as a “foreign policy failure” that funnels taxpayer dollars into an “unaccountable U.N. slush fund”

For many Republicans, the $52 billion boost for semiconductor manufacturing has remained one of the more palatable provisions included in both versions.

Industry leaders say the semiconductors provision is vital for the U.S. to remain competitive with Chinese and other foreign producers.

And lawmakers from both sides of the aisle have pointed to recent chip shortages as evidence that Congress needs to act fast.

Three major semiconductor manufacturers, – TSMC, Intel, and Global Foundries – have recently warned that they will scale back plans to produce semiconductors in the U.S. if Congress is unable to cut a deal.

Countries in Asia and Europe have already rolled out incentives to draw semiconductor manufacturers to set up shop within their borders.