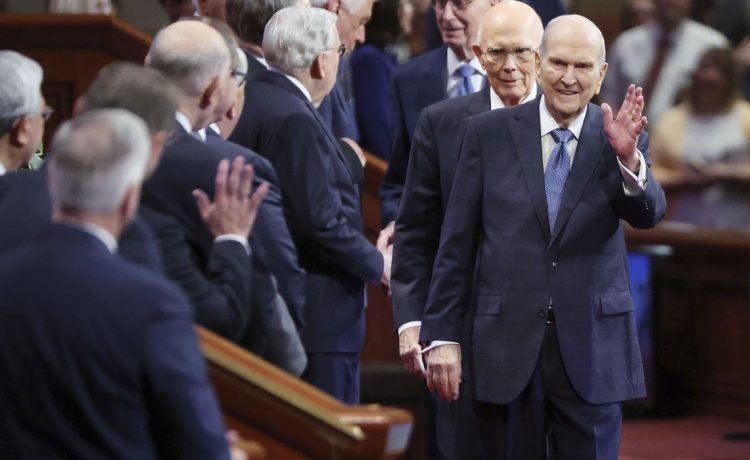 Russell M. Nelson, the 98-year-old president of The Church of Jesus Christ of Latter-day Saints, announced plans for 18 new temples to be constructed across the globe, including five new U.S. locations, at the group’s biannual General Conference Sunday afternoon in Salt Lake City.

Earlier during the two-day assembly, Mr. Nelson denounced sexual abuse, and separately called on members to keep spiritual commitments so they would have “increased access to the power of Jesus Christ.”

But Mr. Nelson’s physical posture drew the most attention during the October event. Unlike past conference appearances, the man viewed as a “prophet, seer and revelator” by the 16.8 million Latter-day Saints who comprise church membership sat on a chair behind the podium when he spoke. His addresses were as short as six minutes on Saturday morning.

Saturday’s use of a chair by Mr. Nelson, who became the oldest leader in LDS church history on April 14, quickly generated an official comment from the denomination’s headquarters.

The church — whose members are popularly known as Mormons — released a photo of the leader seated at the podium and directed inquirers to Mr. Nelson’s official Facebook page.

“Some noticed that I sat on a chair to deliver my message this morning. What a help that was!” he wrote. “I will admit that sometimes even small adjustments—such as a chair—help those of us who ‘age on stage’,’” he added.

“I may not ski black diamond runs anymore, but whether standing or seated, I delight in speaking and hearing words of truth,” Mr. Nelson said In his Saturday morning address, Mr. Nelson decried abuse as “a grievous sin.” The remarks came after the Associated Press investigated claims that an LDS Church bishop, or local lay pastor, failed to report the case of a church member who confessed to raping his two young daughters to legal authorities.

“Let me be perfectly clear: Any kind of abuse of women, children or anyone is an abomination to the Lord,” Mr. Nelson added. “He grieves and I grieve whenever anyone is harmed. He mourns, and we all mourn, for each person who has fallen victim to abuse of any kind. Those who perpetrate these hideous acts are not only accountable to the laws of man but will also face the wrath of God.”

On Sunday, Mr. Nelson told members, “You are constantly on my mind. I marvel at the way you spring into action whenever you see others in need.”

It’s become a tradition for the LDS church leader to announce new locations for temples at the close of the twice-yearly conference. Sunday’s designation of 18 new temples brings to 118 the number of temples he’s announced as president. In August. Mr. Nelson rededicated the Washington, D.C., Temple in Kensington, Maryland, which had been closed for renovations.

The new domestic temple sites include Jacksonville, Florida; Grand Rapids, Michigan; Prosper, Texas; Lone Mountain, Nevada; and Tacoma, Washington. Temples are reserved for special ceremonies and — apart from a public tour held before dedication ceremonies — are only open to those with a “recommend,” or credential, from local authorities.

Mr. Nelson, a noted heart surgeon and medical researcher before his full-time church service, turned 98 on Sept. 9. He became church president on Jan. 14, 2018, following the death of his predecessor, Thomas S. Monson, age 90.

The meetings, which are held in April and October of each year and are broadcast globally, represent a gathering point for members of the church to hear spiritual messages from leaders.