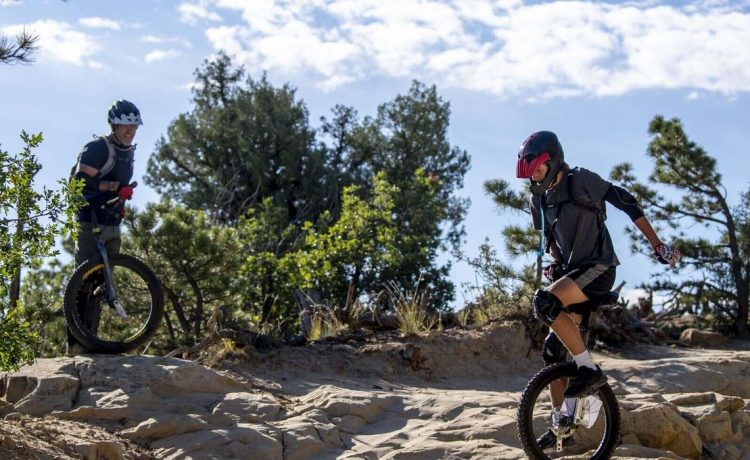 COLORADO SPRINGS, Colo. (AP) — You get a few different reactions when you’re seen riding a unicycle in the mountains.

“Most of the time, you get the disbelief and the person that’s totally psyched for you,” Josh Torrans says.

Sometimes the person is a kid, says Walter Williams. “And the kid will stop and be like, Woooow! Look mom, a clown!”

But these are not clowns out there in the Colorado wild. These are cyclists of a different, rare breed.

They are Rob Urban and his 14-year-old son, Zade, who on a recent morning have decided on a chunky line at Ute Valley Park in Colorado Springs. Upright on their seats, one hand gripping like a cowboy on his saddle, father and son charge forward, swooping and plunging over rock.

They are a strain of mountain biker, preferring the same rough and steep terrain while ditching one wheel. Yes, a cross between that pure cyclist and that performer you see at the circus – though many would like to shake the association.

“You see a unicyclist, everybody knows that stupid song,” Torrans says. “But when you’re on that fat tire, that 2 1/2- to 3-inch tire, they’re like, Oh, my gosh, that thing is BA!”

Allow them to introduce themselves.

They are mountain unicyclists, members of a curious tribe simply referred to as “muni.” They are, as The New York Times once observed, “putting an extreme twist on the most whimsical of devices.”

They are seen hopping from boulder to boulder, rolling over tree roots, catching air from ledges and flying down chutes and gullies. If you haven’t seen them, it’s because they are quite few.

In Colorado Springs, Urban says he can count the fellow riders he knows on one hand.

“There’s more unicyclists than you think, but as far as people riding on rough terrain, it’s a pretty small universe,” he says.

Still, as an industry watcher for more than 20 years, Torrans sees muni accounting for the most “steady” niche within a niche. Off road-ready unicycles represent close to 70% of sales at leading retailer Unicycle.com, of which he is general manager.

Based in Michigan, Torrans has unicycled the likes of Pikes Peak’s Barr Trail and the Whole Enchilada, the full-day epic in Moab.

“Everybody who rides bikes wants to feel like a kid again,” Torrans says. “The next step to that is the unicycle.”

And for the muni bunch, Colorado is something like Disneyland.

“I would say the Front Range is probably the best place in the country to be if you like mountain unicycling,” says Noli Ergas, who moved to Denver for that very reason. “Not just because of the abundance of trails, but because there’s a good number of riders, relatively speaking.”

Ergas oversees the Colorado Front Range Unicyclists Facebook page, which counts 220-plus members. One of these is Williams, who lives north of Denver.

He’s been mountain unicycling for more than 15 years. It’s “one of the most physically grueling, fun activities I’ve ever done,” he says. “Because you never stop pedaling. … If you don’t pedal, you don’t go. And if you find yourself in a situation where you can’t dismount, you have to go and push yourself through.”

“There’s a lot of falling involved,” says Urban, who goes with helmet, knee pads, elbow pads and gloves, to protect the hands that typically break tumbles. After all, better the hands than the face – better the seven stitches Urban got in one instance. In another, he broke his ankle.

But for the slow, stop-and-go pace required to balance and maneuver terrain, unicyclists like to think consequences are greater in traditional mountain biking.

It takes perseverance, Urban says. Patience, because of the learning curve and the natural, humbling obstacles. It takes an analytical mind, one drawn to problem-solving, says Jamey Mossengren. Many in the muni community share with him an engineering background.

But Mossengren left his 9-to-5 for van life a while ago. He opted for the freedom of the road and the greater freedom of mountain unicycling.

He’s known as the Unicycling Unicorn, traveling the world for competitions and rallies and long, multi-day ventures like the Colorado Trail.

Colorado “is one of the best muni scenes, at least in the U.S.,” Mossengren says. “I love coming through because I get to hang out with (friends) and stay with them and go on some really gnarly rides. You guys have some of the best trails in the world.”

They are busy trails, busy enough with hikers, runners and mountain bikers.

Some would rather not share with the silly-looking unicyclist.

So Torrans has gotten another reaction: rolling eyes.

“You get those hardcore people,” he says. “I just laugh. Life is too short to take yourself too seriously.”

Life is about overcoming challenges, one might say. For Urban’s son, mountain unicycling is a helpful teacher.

On a recent morning at Ute Valley, Zade outperforms his father on one rugged line.

The teen is nervous approaching the downhill. He’s smiling at the end, flawless.