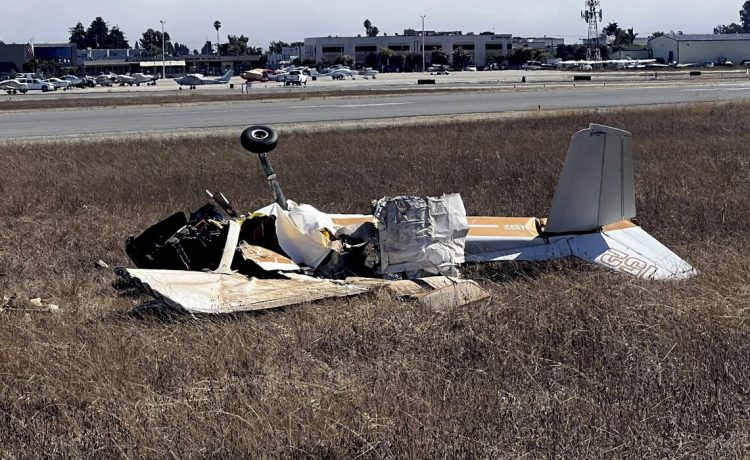 Watsonville Municipal Airport does not have a control tower to direct takeoff and landing for aircraft, The Associated Press reported.

Just before 3 p.m, a twin-engine Cessna 340 carrying two passengers and a pilot flying solo in a smaller single-engine Cessna 152 were both making the final approach to land at one of the airport’s four runways when they collided midair, 200 feet above ground, according to a Federal Aviation Administration statement cited by the AP.

Officials indicated there were multiple fatalities, but it’s unclear whether or not any of the three people involved survived the crash. There were no injuries to people on the ground at the airport.

Off-duty cop Franky Herrera happened to witness the incident. While driving past the airport, he saw the Cessna 340 bank hard to the right before hitting the Cessna 152 in the wing, the Santa Cruz Sentinel reported.

“The smaller plane just spiraled down and crashed,” Mr. Herrera told the newspaper. The Cessna 340 struggled and continued on, before Mr. Herrera saw flames at the other end of the airport, corroborating initial reports and a later photo from the city of Watsonville showing the plane crashed into a hangar.

Airplane transmissions cited by Flying magazine indicate that the pilot of the Cessna 340 gave three alerts as to his intent to fly a straight approach into Watsonville Municipal Airport’s Runway 20.

“I’m going to go around, you’re coming at me pretty quick,” was the final transmission from the Cessna 152 pilot before the crash, according to Flying.